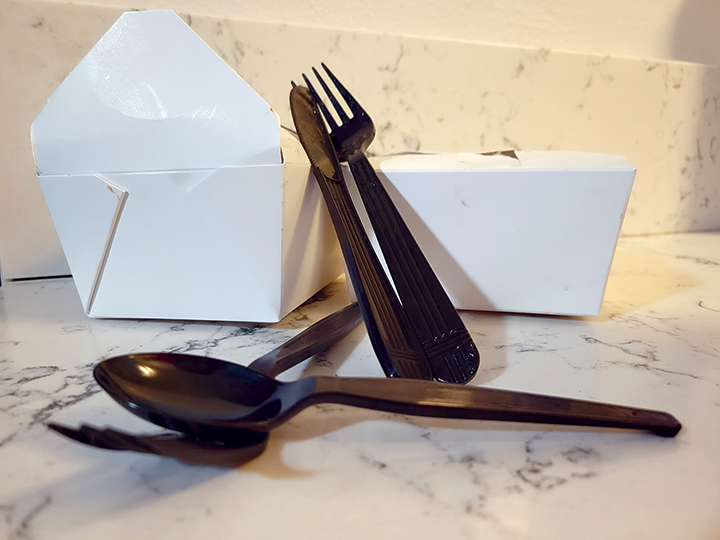 The West Hollywood City Council took the first step toward banning single-use plastics at city businesses during its meeting Oct. 4.

Council members directed staff to draft an amendment to the city’s municipal code that will prohibit food and beverage providers to serve their meals in or with plastic products. This includes single-use plastic straws, utensils, containers, lids, cups and bowls.

Within 90 days, staff will bring the ordinance before the City Council for approval and implementation.

In 2019, the City Council directed staff to draft an amendment to the city’s municipal code to require food and beverage providers to only supply single-use plastic utensils and straws upon request. The item was tabled because the state is considering a similar measure.

Now, council members say the city should take the measure one step further to ensure West Hollywood is a leader in climate protection.

“We are in a climate crisis, and there needs to be a sense of urgency,” Mayor Pro Tempore Sepi Shyne said. “If we’re going to be leading by example, we need to put our money where our mouth is.”

As written, the proposed ordinance would give businesses a six-month implementation window after the ordinance is officially approved. However, Councilman John D’Amico expressed concern that six months may not be a large enough window to make the change.

Shyne said the ordinance could include a tiered implementation to allow businesses time to work through their inventory and find new suppliers. She said the ban could start with plastic forks and straws, and within 12 months include plastic cups and lids.

Genevieve Morrill, president and CEO of the West Hollywood Chamber of Commerce, said that although the business community wants to support a clean environment, the ordinance would place too much strain on businesses as they struggle to recover from the economic impacts of COVID-19.

“We all need to play a role in helping in social justice and environmental world issues, and your local businesses do too,” she said. “We can change the world, but do we have to do it all this year?”

Councilman John Erickson said he wants to be mindful of business owners’ concerns, but he referenced a study by the University of California Los Angeles Luskin Center for Innovation that found threats to businesses and the economy posed by transition to plastic alternatives are small. The study stated that food vendors may benefit fiscally following adoption of reusable items.

Councilwoman Lindsey Horvath agreed, stating the city and the business community need to work together to help lessen the city’s environmental impact.

“This is not an issue that’s pitting group against group,” she said. “We’re all in a commitment to protecting the environment, and this is about how we set ourself on a sustainable path and how do we do it together.”

The council directed staff to discuss with business owners what they would need from an implementation process, how long the process should be and what types of non-reusable items would be allowed under the ordinance. The council will vote to officially implement the ordinance at a meeting in January.