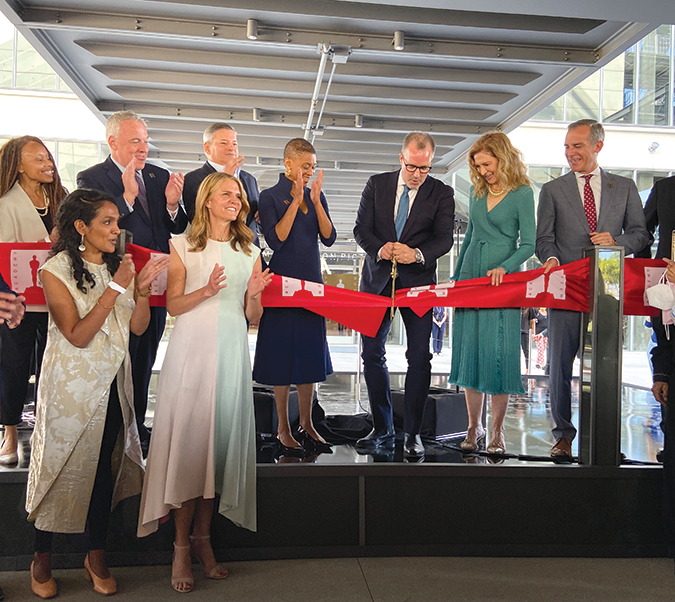 The Academy Museum opened its doors to the public on Sept. 30, letting the first visitors inside the landmark institution dedicated to the art of moviemaking.

Officials from the museum and the Academy of Motion Picture Arts and Sciences joined Los Angeles Mayor Eric Garcetti, Councilwoman Nithya Raman, 4th District, state Sen. Ben Allen and state Assemblyman Richard Bloom for a ribbon-cutting ceremony, which was preceded by a Tongva Native American ceremony to bless the new museum. Film industry representatives were also present, including Ted Sarandos, co-CEO and Chief Content Officer for Netflix, and Effie T. Brown, CEO of Gamechanger Films, as well as Colleen Bell, executive director of the California Film Commission. The leaders called the new museum transformative and invited everyone to visit and see for themselves.

“Los Angeles is the movie capital of the world, and we are thrilled to be unveiling the Academy Museum in the heart of the city,” Kramer said.

Garcetti added that Los Angeles City Hall, Union Station and numerous other L.A. landmarks would be illuminated in gold light on Sept. 30 in honor of the Academy Museum.

“As the creative capital of the world, we’re so proud in Los Angeles of our legacy of moviemaking,” Garcetti said. “The Academy Museum is an incredible addition to our cultural landscape. By honoring the films that have sparked our imaginations and even changed our lives, it will inspire people for generations to come.”

The Academy Museum, located at the northeast corner of Wilshire Boulevard and Fairfax Avenue, includes six floors with 50,000 square feet of exhibition space, as well as the spherical 1,000-seat David Geffen Theater, designed by architect Renzo Piano, and the 288-seat Ted Mann Theater. Both theaters will be used for film screenings and special educational events.

The Academy Museum’s core exhibition, “Stories of Cinema,” explores the history, arts and sciences of moviemaking. Additional inaugural exhibits include “The Pixar Toy Story 3D Zoetrope,” “The Path to Cinema: Highlights from the Richard Balzer Collection” and “Backdrop: An Invisible Art.” The museum’s first temporary exhibit, “Hayao Miyazaki,” pays tribute to the Japanese filmmaker’s life, career and work with Studio Ghibli. Museum officials also highlighted “The Oscars Experience,” an immersive attraction that simulates the thrill of walking on stage at the Dolby Theatre and accepting an Academy Award.

“I’m proud to say that the Academy of Motion Picture Arts and Sciences is among the institutions that have changed things for the better,” Academy President David Rubin said. “We’ve done it in the Academy Film Archive, and in the Margaret Herrick Library. We’ve done it through our educational programs, fellowships, grants and awards. And now we’ve done it by giving Los Angeles, and the world, this spectacular new home for the movies. We’ve made our dream a reality, and we want to welcome absolutely everyone to share in its treasures and delight in the celebration of motion pictures.”

The Academy Museum will host a free community celebration from 10 a.m. to 6 p.m. on Oct. 17. Tickets to the Academy Museum are available only through advance online reservations by visiting academymuseum.org/en/tickets, and by using the Academy Museum’s mobile app. General admission tickets are $25 for adults, $19 for seniors 62 and older and $15 for students. Admission is free for guests 17 and under. “The Oscars Experience” requires a separate $15 ticket.