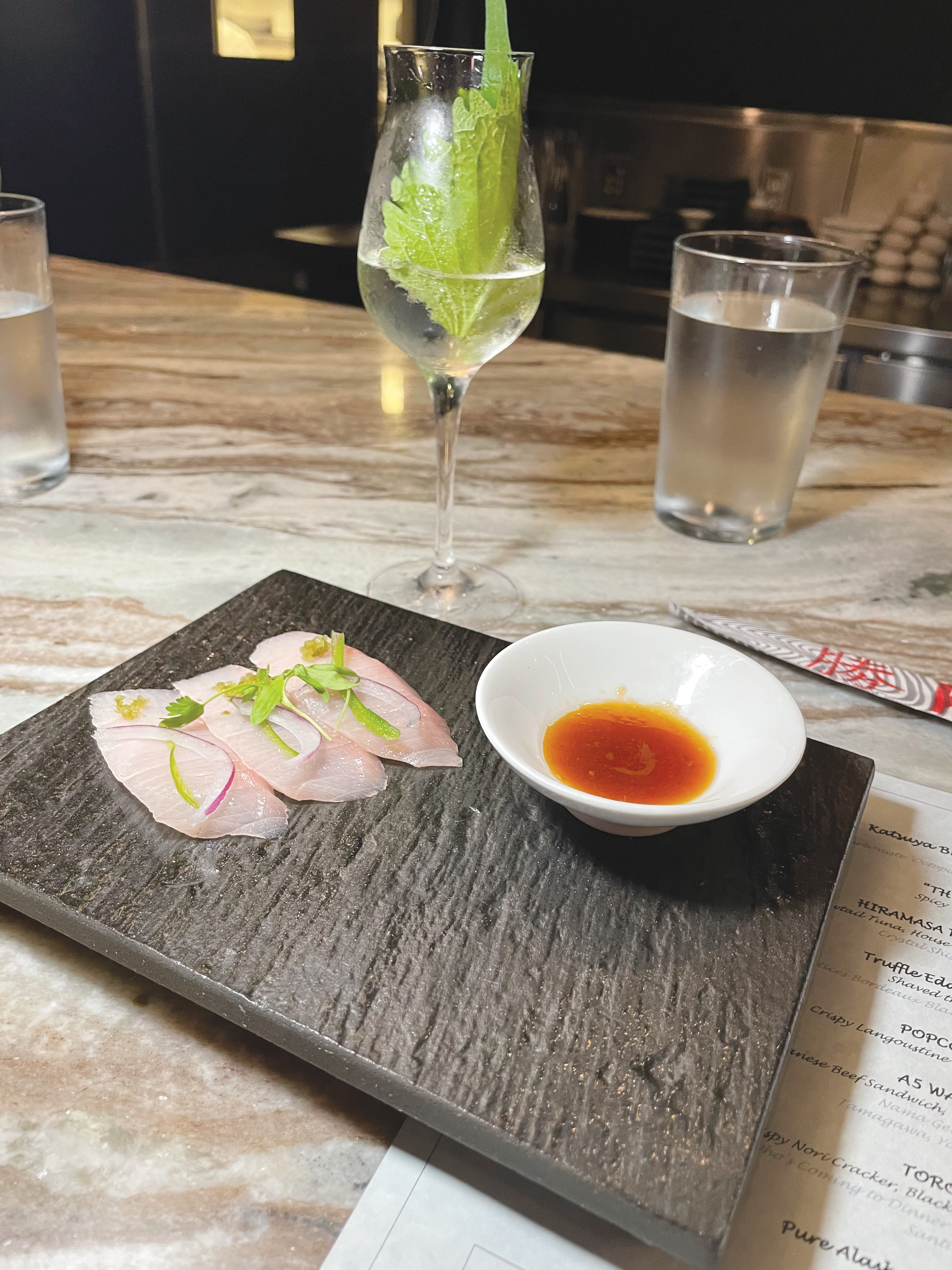 The sleek and sexy dining room designed by Phillippe Starck at the innovative sushi concept restaurant, Katsuya in Brentwood, sets the table for the ten course omakase dinner that was to come.

Omakase is a formal Japanese dining experience in which each course is artistically prepared and elegantly presented using the finest seasonal ingredients. “Omakase” means “I will leave it to you,” and omakase menus give chefs creative freedom and diners an unforgettable meal.

Working with Dayag, our server paired each of the dishes with small pours from boutique wineries, world-class sake and award-winning cocktails.

As our server poured a tasting of 2019 Carboniste Octopus Albarino Extra Brut from Sonoma, she said it would wake our palate and prepare us for “The Original,” bite-size pieces of spicy tuna on crispy rice.

Dayag said his family moved around often because his father was in the military.  The family eventually settled and Dayag began working in a pizza restaurant at 16. After that experience, he knew he wanted to become a chef.

For our second dish, Dayag presented a pink kingfish on a thin black slate with a bowl of onion ponzu for dipping. The thickly sliced kingfish had a bite of heat from a dollop of lime koshō seasoning. Koshō is a paste made from chili, yuzu zest and salt. On top were thin slices of red onion.

The course was paired with a can of Crystal Shiso Mojito, made by bar world dynamo Yael Vengroff. It’s a combination of light Casa Magdalena rum with shochu, shiso, coconut and Indian lime. To me, it tasted like a refreshing Mai Tai.

I enjoyed sipping it with one of my favorite dishes of the evening, a truffle edamame dumpling, which was presented in a shallow black bowl with truffle shavings on top and edamame beans scattered around the edges. The heavenly dish was paired with a crisp 2018 Domaine des Justices Bordeaux Blanc from France.

While we gave our palates a break, we watched Dayag batter and fry long and thin “popcorn shrimp” langoustines. The shrimp was cut in half before being served with a spicy, creamy dip. Using our chopsticks, we dipped each bite-size piece into the satisfying sauce.

Our first sake of the evening was paired with an A5 Wagyu Katsu. Though the dish was presented like a sandwich, it tasted more like the finest hamburger ever made.

Dayag dusted the beef with panko crumbs, flash fried it and placed it between toasted brioche bread. A black garlicky katsu sauce, comprised of more than 15 ingredients, was spread on top before it was served standing up in a white serving bowl.

I leisurely enjoyed the wagyu so I could appreciate the tender beef and pleasing mustard essence. The 2019 Tamagawa Yamahai Junmai Muroka Nama Genhu red label sake offered a collection of woody, earthy, honey tea and citrus peel notes, which was the perfect pairing for the course.

The Alaskan king crab hand-roll was our server’s favorite course, and I could easily see why. Served on a small white ceramic plate, was a large portion of fresh crab rolled in white rice paper dotted with black sesame seeds. Presented alongside was a spike of dynamite sauce.

Bright red Maguro bluefin sashimi was served with a pickled ginger shoot and special soy sauce. Dayag served it under a glass lid, revealing a garden of green leaves and yellow, orange and red flowers underneath. The exquisite dish paired nicely with the second sake, a small pour Nigori Ginjo “Summer Snow” sake. Made is Hiroshima, the unfiltered nigori sake offered a luscious aroma of melon, and reminded me slightly of cotton candy in flavor.

Diners can choose among three entrees, and instead of the sushi set, we ordered the miso-glazed Patagonian tooth fish (similar to a sea bass) and the Robata maple-smoked short ribs.

The ribs arrived under a dome of smoke, and once Dayag lifted the lid, a pleasing aroma of maple wood tantalized our senses. The beef was tender and glazed with a slightly sweet Yanikiniku barbecue sauce.

The final course was a yuzu and raspberry white chocolate snowball served with raspberries. Dayag poured dry ice vapors onto the white sphere to freeze and harden the top before presenting the dessert.

We cracked it open with spoons and the yuzu inside presented like the yolk of an egg. Fresh raspberries encompassed the “yolk.” The dessert was light and citrusy, the perfect ending to a fabulous ten course omakase experience.