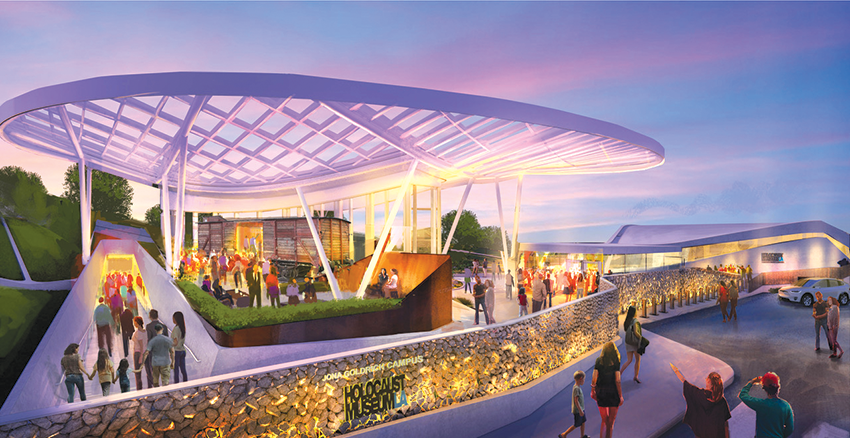 Holocaust Museum L.A. is commemorating its 60th anniversary with expansion plans for its Pan Pacific Park campus, and its largest capital campaign to date.

Visitors to the museum have increased by 400% since the opening of its permanent home in Pan Pacific Park in 2010, Kean said. The museum plans to break ground on the expansion project in April 2022, and anticipates its opening in spring 2024.

“Museum space is at capacity, particularly during school hours – and requests for student tours and public workshops continue to increase. As a result, we are forced to turn away schools and tour groups,” Kean said.

The expansion will allow the museum to increase visitor capacity to 500,000 annually by 2030, including 150,000 students. The additional space will also allow for new technology to preserve Holocaust survivor testimonies, and for more temporary and traveling exhibits.

The capital campaign’s goal is to raise $45 million. To date, the campaign has already raised $22 million through lead gifts to name the campus from Andrea Goldrich Cayton and Melinda Goldrich, daughters of museum founder and Holocaust survivor Jona Goldrich; and the Stanley and Joyce Black Family Foundation, to name the Boxcar Pavilion that will house an original Nazi-era boxcar that the Black family obtained and donated. Approximately $8.5 million was received from the state of California for a new building with more space for classrooms, exhibits and public programs. The Cayton/Goldrich gift includes a matching opportunity for members of the community to contribute to the campaign.

“Ten years from now, most Holocaust survivors will be gone. We need to act now to ensure the voices of our survivors live on in perpetuity and to address the rising tide of hatred, bigotry and antisemitism,” Kean said. “This expansion will allow us to amplify our reach and impact as we continue to teach the next generations the critical lessons of the Holocaust and its continued social relevance.”

Holocaust Museum L.A. is located at 100 The Grove Drive. For information, visit hmla.org.