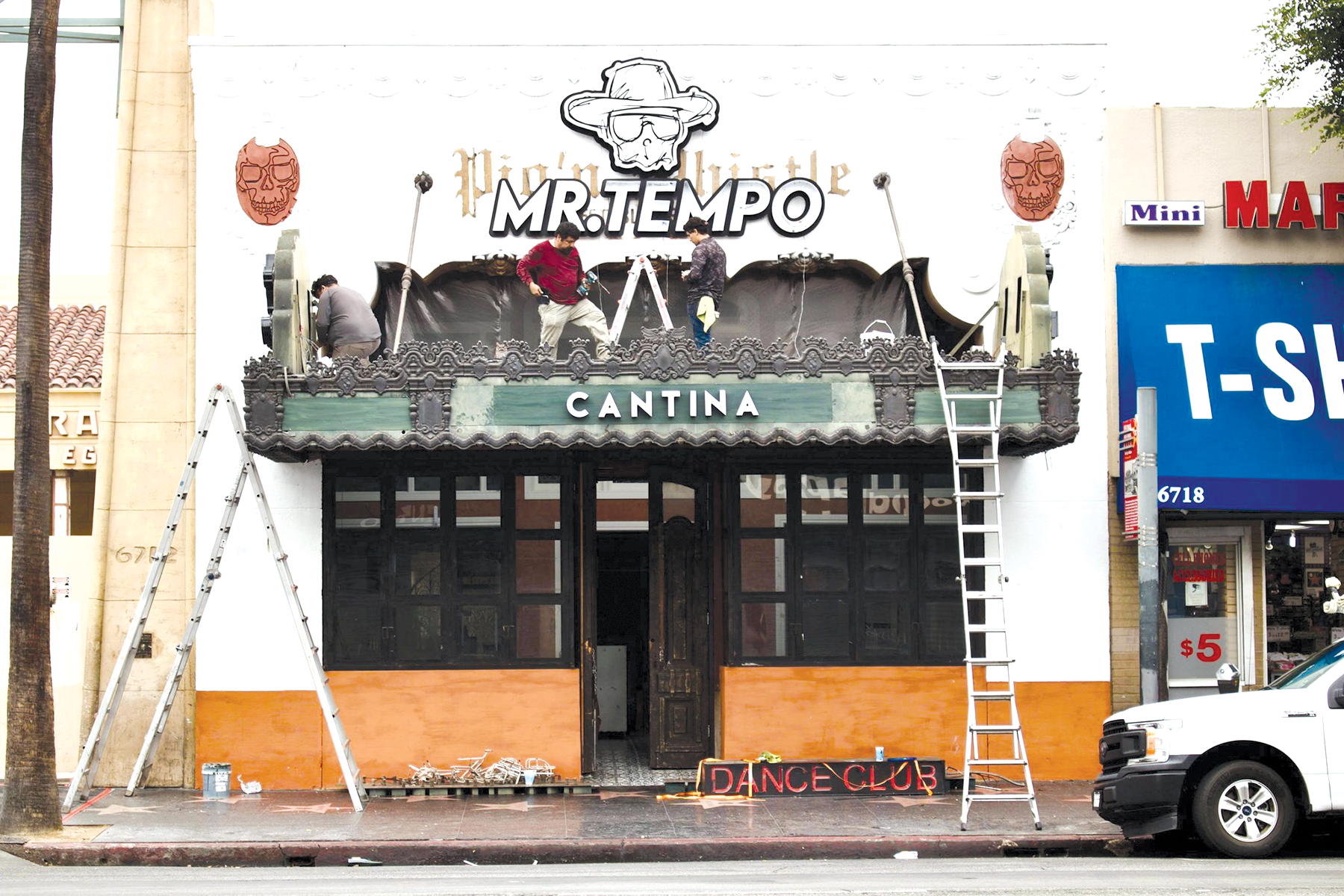 The city of Los Angeles has issued a stop-work order for unpermitted construction at the former Pig ‘N Whistle restaurant on Hollywood Boulevard. The façade was allegedly illegally removed last weekend as workers repurposed the building for a Mr. Tempo cantina.

To preservationists, the illegal work was yet another slap in the face for organizations seeking to spare “Old Hollywood.” Los Angeles historian Alison Martino was among the individuals who sounded the alarm after photographs surfaced of the construction.

“I feel that the building is important to Hollywood … because it represents what Hollywood was intended to be,” she said.

Martino said the Pig ‘N Whistle opened in 1927 but closed in 1955. After nearly 50 years, the restaurant “miraculously” reopened in 1999 with many of the original features after a full restoration, she said. It closed again last spring, and now, that work could be lost, Martino said.

“Imagine all that work it took to restore it and bring it back to its original glory – just to be gutted again,” she added. “So, I guess I don’t understand why they couldn’t have just taken what they had and went from there, why they had to desecrate it and destroy it and take down the dancing pigs and put skulls up instead. To me, it doesn’t look like a Hollywood destination anymore. I just feel like Hollywood’s losing its character. It’s losing its history, and that is a perfect example of not caring about history.”

Hollywood resident and photographer Brian Donnelly initially discovered the work being done to the restaurant he once frequented. He walks the neighborhood regularly and “happened onto the scene” of the work at 11 a.m. on Oct. 23, he said.

Donnelly lamented the loss of the façade and the Pig ‘N Whistle in general. He said it had the second-best chicken pot pie in Hollywood – with Musso & Frank Grill being the best – and a chicken and rice soup that was “to die for.”

“It was just nice to sit in history,” Donnelly said.

The Hollywood Historic Site signage at the location states that Sidney Hoedemaker opened the Pig ‘N Whistle, the first family-style restaurant in Hollywood, in 1927. It featured “rich, hand-carved wood décor,” and played popular music from a pipe organ. The Hollywood Glee Club performed on Friday nights.

However, the Pig ‘N Whistle is part of the Hollywood Boulevard Commercial and Entertainment District, which is recognized by the National Register of Historic Places.

According to the district’s nomination form from 1985, which lists the building address as 6718 Hollywood Blvd., the Pig ‘N Whistle was located in a one-story commercial building with three storefronts.

The most eastern storefront retained a “fanciful Churrigueresque detailing and marquee from 1927,” according to the form.

It was a companion soda fountain for the Egyptian Theater, and the interior of the store had an intact, although hidden, ceiling.

“Some wrought iron remains, as well as the stone medallions and ornament on the stucco façade,” the nomination form states. “The other two storefronts have been repeatedly altered and retain no historical integrity.”

According to Los Angeles City Planning’s Office of Historic Resources, the historic status requires that “all permits for alterations of the building be reviewed for potential adverse impacts to the historic resource.”

The city’s Department of Building and Safety generally would add a permit clearance for the office of historic resources, but that did not occur, as the owner/applicant did not apply for permits. Typically, office representatives would work with the applicant to evaluate project options that would not negatively impact historical resources.

“We have not yet heard from the applicant or owner to begin such a discussion,” a representative said.

The stop order issued by the Los Angeles Department of Building and Safety on Oct. 25 called for all unpermitted work to cease and for the developers to apply for permits and conduct all required inspections, including electrical, plumbing and mechanical.

“Building and Safety received a complaint on [Oct. 22] that construction work was taking place at this location without permits,” LADBS representatives said. “An inspection of the site on the same day revealed that there was construction in progress to both the interior and exterior of the building, without the required permits and approvals. A stop-work order has been issued, and the Code Enforcement Bureau has an active case to monitor compliance.”

O’Farrell’s office confirmed the stop-work order and issued a statement from the councilman.

“Occurrences like these are why I introduced a motion to penalize those who proceed with unpermitted construction work in the city,” he said. “I look forward to the final ordinance being brought to the City Council for approval.”

Schave and Cooper said the city has the discretion to hold the developers accountable for the unpermitted work.

“I think it would be a really interesting exercise to see the city come back and say, ‘OK, you guys obviously want to open your new venue here, and here’s what we need to see as a gesture of good faith [to undo] the damage that was done in order to move forward,’” Cooper said.

Schave said historians and preservationists have been alerting LADBS, the city’s Office of Historic Resources and city officials about the construction at the Pig ‘N Whistle since they noticed work being done on its interior in August.

“Everybody’s just been screaming for months that this slow-motion train wreck is happening,” he added.

Attempts to reach representatives of Mr. Tempo by deadline were unsuccessful.

More racist white people that think they own Hollywood. They are less concerned about the massive homeless issues and gang shoot outs. Pig & Whistle was a Homeless encampment and it would be nice to have a new successful restaurant like this turn hollywood around. It’s people like this that make Hollywood the cess pool it is. The reason restaurant owners sometimes do work without permits is cause it takes years to get approvals. Maybe make it easier and less expensive and time consuming to “do the right thing”. If the people complaining are so concerned. They should pool their money together and reopen the pig & whistle themselves and see how hard it is to do business in LA.

Fine the restauranteur into bankruptcy!

Show no mercy … or this will continue to happen.

It was not a ‘homeless encampment’. Street kids sat in front of it once there were lockdowns from Covid. They were removed. This is Hollywood history. It’s ugly now with ‘Mr Tempo’, who obviously has no design sense or reverence to its history. It needs to be fully restored back to its original design prior to this illegal destruction. We need to return to the Golden age of Hollywood and creativity for both residents and visitors.

So sad to see this happened.
This is blatant vandalism of Hollywood History which needs severe punishment.
I did walking tours of Hollywood up to 4 tines a day for 7 years. This was an important site which had been lovingly restored. We sent many thousands of people to dine there, and sad it did not make it.
But the new owners need to be held accountable. This is history which holds so much meaning and beauty for residents and tourists alike.

I’m shocked and mortified that the defacing and mutilation of a historic Hollywood landmark isn’t creating more of an uproar. The previous comment that Hollywood needs to change…98% of old Hollywood has changed…by being demolished. That’s what the boulevard needs, another Cantina! This is shameful black eye to the city. I just hope it can be repaired and restored again.

The ruthless hand of ignorance has destroyed another Hollywood monument on which the utmost exertion of human genius and artistry were employed.