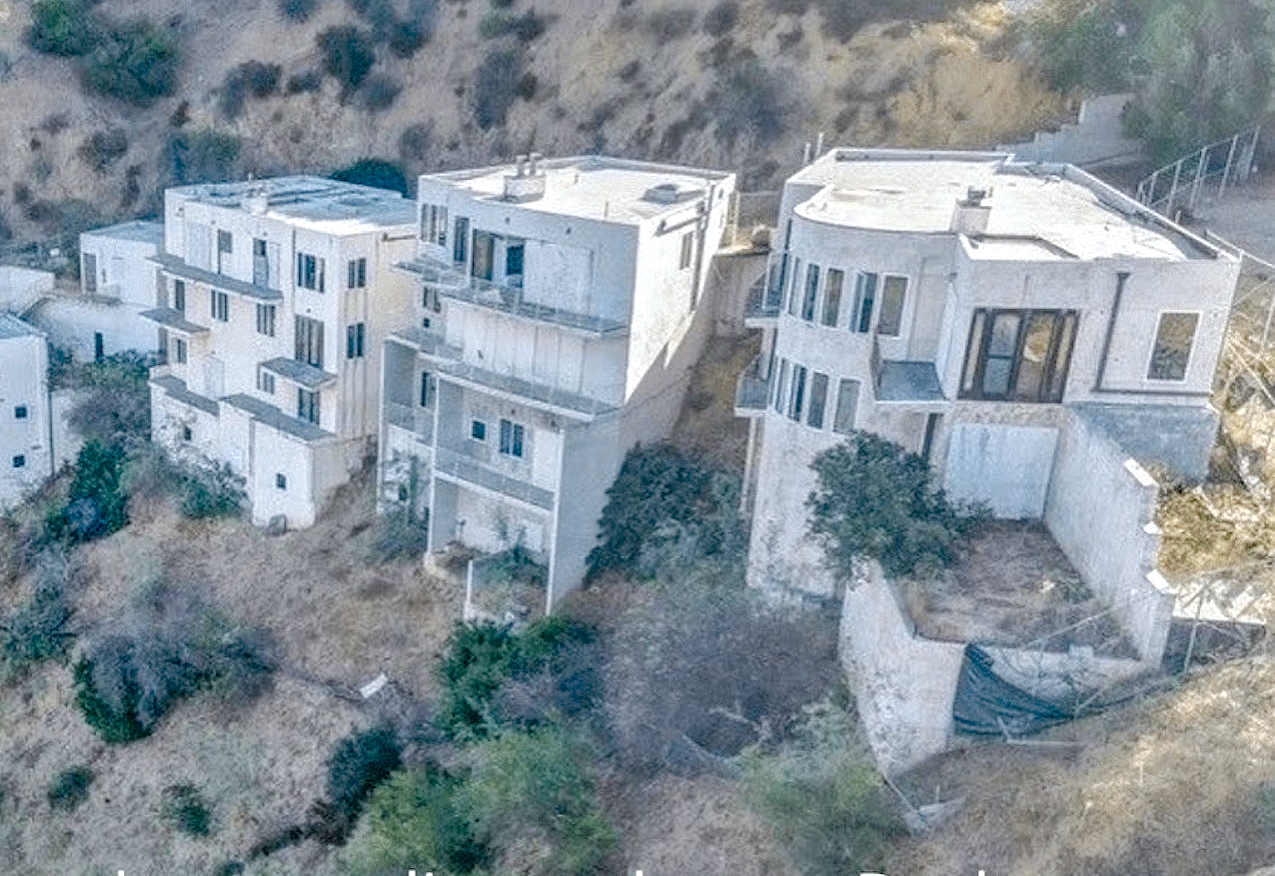 Five unfinished homes near Laurel Canyon are cited in a criminal complaint. Authorities are calling for the current owner to raze the structures. (photo courtesy of realtor.com/Los Angeles City Attorney’s Office)

Los Angeles City Attorney Mike Feuer’s office has filed charges against the owners of five illegally-built hillside homes near Mulholland Highway for allegedly failing to abide by a court order dating back to 2003 to raze the structures.

Feuer announced on Oct. 14 that 35 counts have been filed against the owners, Shahram and Ester Ghalili, for misdemeanor building and safety code violations. The defendants are the current owners of the partially-built homes, but Feuer acknowledged that the properties in the 2500 block of Woodstock Road in the Laurel Canyon area have changed hands multiple times over the past 18 years. Although the Ghalilis did not initially build the homes, they are responsible for complying with previous court orders that the structures be razed, Feuer said.

“Developers must follow the city’s rules, just like everybody else,” Feuer added. “These unpermitted structures in the Santa Monica Mountains were supposed to be demolished nearly 20 years ago, and yet we allege the current developers have been ignoring the city’s order and continuing to work on structures that should no longer be there.”

Feuer said prosecutors are still investigating the history of the properties and did not know why the city did not previously take action to have them demolished. He said the Department of Building and Safety was tasked with ensuring the orders were carried out and said his office will be working with that department to determine why the buildings were not demolished. Feuer did not name the original property owners and said it was not illegal for them to sell the properties without tearing down the structures.

The Los Angeles City Attorney’s Office became aware of the properties after residents in the area complained that construction had resumed in December 2020. Department of Building and Safety inspectors went to the properties four times from last December through February and found work being conducted on the houses, according to the criminal complaint. Each time, stop work orders were issued. The criminal charges were filed after four violations.

Prosecutors learned about a 2002 court order requiring the homes to be razed through an investigation. Feuer said the five houses were part of a 21-home development project that was initially proposed in the late 1990s but was subsequently forced to undergo an environmental impact report by the Los Angeles Department of City Planning. The initial owner appealed and in 2002, a state court of appeals ruled in the city’s favor and required an EIR, Feuer said. When no environmental review was conducted within one year, the court ordered the structures to be demolished, he added.

The city recorded the order with Los Angeles County, which was required to notify all future buyers of their responsibility to tear down the homes before any project could resume, Feuer added. The notice to raze the structures was transferred along with the land, he added.

“As far as I know, and I am still looking into all of this, there were no sign-offs on anything subsequent to 2003,” Feuer said. “In other words, in 2003, the order was affirmed that there should be an EIR done and in the absence of that, there needed to be demolition of these properties. It was recorded with the county so that any subsequent purchaser, and there have been a few purchasers in between now and then, was on notice about this. That’s what I know. As far as I know, there have been no actions within Building and Safety since that time.”

Department of Building and Safety spokesman Jeff Napier said information regarding the illegal work allegedly occurring at the site from December through February was forwarded to the City Attorney’s Office on July 16, and he declined to provide further details. The case is currently pending in court.

“The department cannot comment since there is upcoming litigation,” Napier said in a statement.