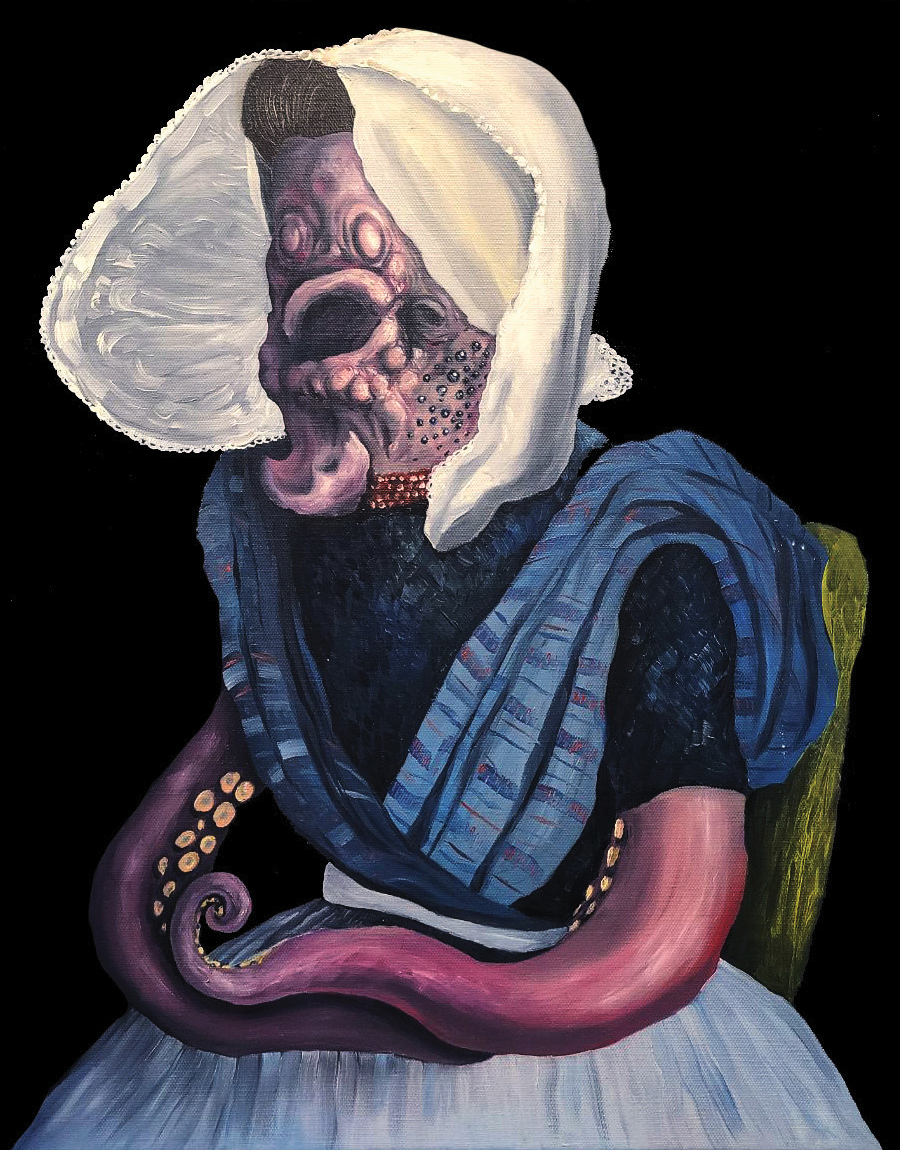 Pouya Afshar’s exhibition “The Charm of the Unfamiliar” explores the toll of migration. (photo courtesy of Pouya Afshar)

Through Jan. 9, Craft Contemporary is presenting “The Charm of the Unfamiliar,” artist Pouya Afshar’s multimedia story of displacement, migration and resiliency.

Using historic portraiture, animation techniques, digital applications and augmented reality, the exhibition follows the fictional narrative of a group of migrants that relocate to an abandoned city that had once been an amusement park.

The displaced in this narrative are hybrid personas – human and animal, some real, some mythical – each physically transformed by their experiences of migration. The hybrid beings embody the toll of displacement and the adaptation and strength migration require, and reflect the dehumanization and exoticizing of immigrants and refugees that continues in the United States.

Through this work, Afshar aims to open up dialogue about global refugee crises, U.S. immigration policy and the realities immigrants face when they make it to the land of the “American Dream.”

“Artists are the ones recording the history,” Afshar said. “One has to live, breathe and feel the surroundings alongside the characters they create.”

The exhibition begins with the video projection “Washed Ashore,” where the viewer sees smoke rising from the migrants’ homeland and their first steps into a new land. Visitors can then peer through the view finders of “Shahr-e Farang,” Afshar’s interpretation of a 19th Century peepshow box, to watch the short animation “LA DOLCE VITA,” which chronicles the story of Hope, a character who decides to leave their war infested city to find a better life abroad. In a series of oil paintings, “Ellis I–X,” Afshar merges his characters with historic images of detainees at Ellis Island.

These highly-staged photographs were taken by Ellis Island clerk Augustus Sherman between 1905 and 1925. Sherman’s series of photographs has become an iconic representation of the romanticized American immigrant experience and American “melting pot.”

In reality, the people pictured were being detained at Ellis Island, often for health or legal reasons. Since Sherman seldom included the names of his subjects, it is rarely known who among them were permitted into the U.S. or were deported back to their home countries.

Afshar also deploys digital technology to further enhance his characters’ experiences. Small keepsakes brought by the migrants, such as a teddy bear, materialize via 3-D printing. Through augmented reality, Afshar’s characters break out of the two-dimensional plane to occupy space and move through the exhibition. Viewers are transformed from voyeur to participant, moving with the characters as they navigate their journey.

At the conclusion of the journey, the characters and visitors pass through a constructed wall. Inside, Afshar presents animated interviews in which individuals who immigrated to the United States share their varied experiences.

“The political rhetoric surrounding immigration and the world’s refugee crises has grown increasing enflamed in recent years,” curator Holly Jerger said. “Afshar works against this dehumanizing discourse by illustrating the complex reasons people are forced to leave their homelands and the multiple challenges they face upon resettlement. With this exhibition, he asks us to walk with these characters and understand their experiences.”

Born in 1984 during the Iran-Iraq War, Afshar left Iran with his family at sixteen and resettled in Los Angeles. Afshar’s multidisciplinary practice investigates themes of diaspora, memory, violence and loss.

He is an alumnus of the California Institute of Arts and a graduate of University of California Los Angeles Graduate Department of Film and Television, where he focused on animation and digital media.