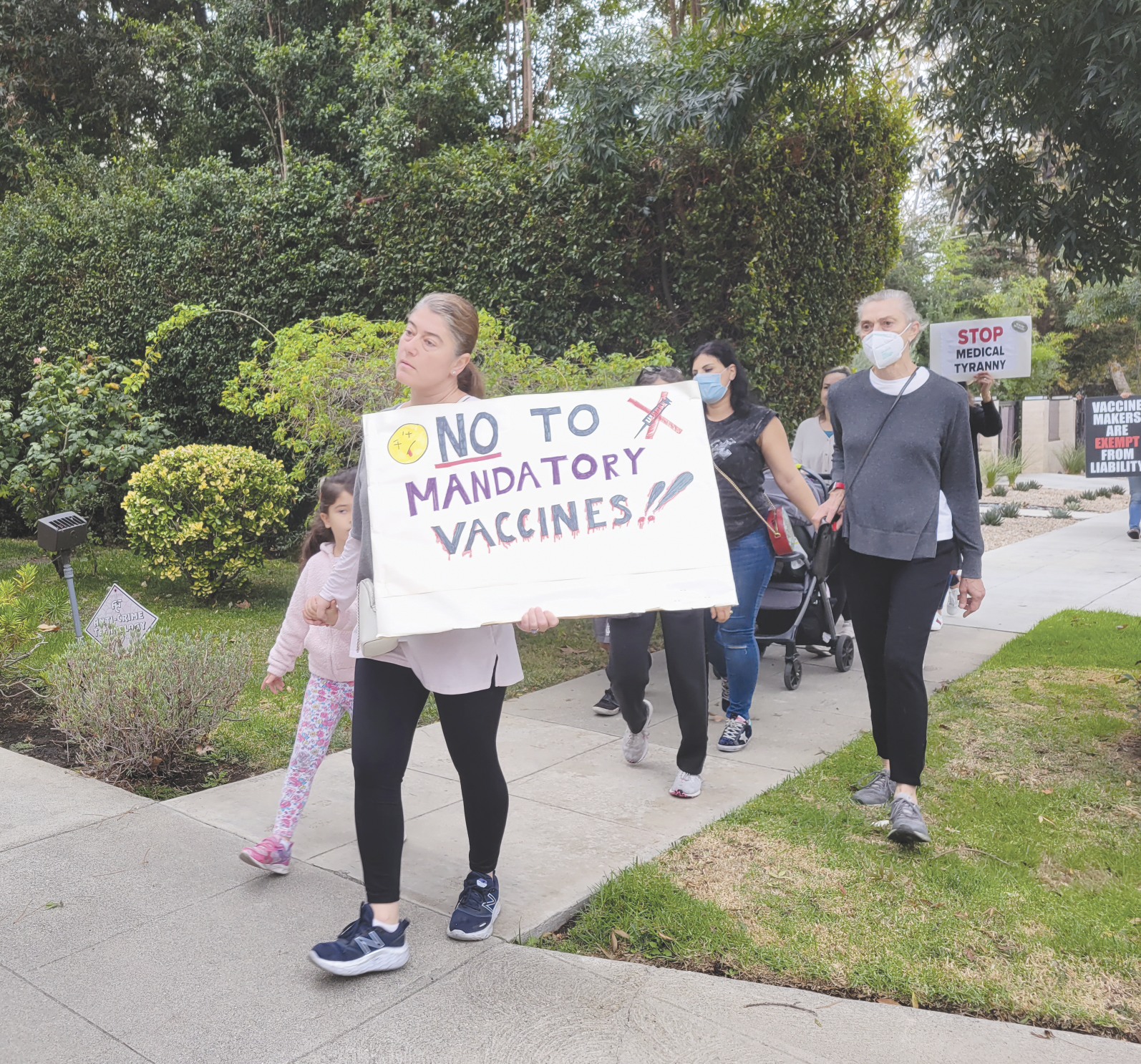 The Beverly Hills City Council on Oct. 12 unanimously approved the ordinance, which prohibits protests within 300 feet of elementary and middle schools. It also bans protestors from following students and interfering with permitted events or separate demonstrations.

“Using children to make a point and to scare them, harass them, intimidate them – it’s just shameful,” Councilman Lester Friedman said, adding that the protestors appeared to be the same protestors who visited his home when he was mayor.

“It’s just shameful. I am fully aware of their First Amendment rights. They do have those rights, but to use children as a tool, they should just be embarrassed that they did so.”

He said one protestor stated that forcing a child to wear a mask was child abuse, and that it was akin to rape.

On Oct. 6, Mayor Robert Wunderlich was celebrating National Walk to School Day with Hawthorne Elementary School families when they came across approximately 30 protestors. The demonstrators swarmed the mayor and his dog outside Kelly’s Coffee & Fudge Factory.

Holding signs and chanting things like “vaccines don’t work,” the crowd followed Wunderlich as he continued to walk, and several families stayed behind, seemingly for their children’s safety. The mayor invited the group of protestors to meet with him.

“I’m happy to have a conversation, but after we get the kids safely to school,” Wunderlich told the demonstrators.

Prior to the incident, the Beverly Hills Firefighters Association promoted the protest on Instagram. However, it did not appear that any firefighters or union representatives participated.

Association president Victor Gutierrez said the union originally promoted the event to peacefully support BHUSD families. However, the association deleted the post after learning that one of the speakers had previously discussed “instilling fear and all of that.”

“That is absolutely not our message and has not been our message, so we deleted that post and told all of our members that we are not in support of that, and that we would not have anybody attending,” Gutierrez added.

Prior to the council meeting, Beverly Hills Police Chief Dominick Rivetti addressed the BHUSD Board of Education to discuss the department’s response to the incident.

“We’ve gathered up all the video that we could find regarding the conduct of the demonstrators and protestors, and we have presented that to the district attorney’s office as well as the city attorney’s office to see if [there are] any violations of the law,” he said.

Board member Noah Margo referenced the draft urgency ordinance that the City Council would consider later that day and asked Rivetti why it didn’t apply to Beverly Hills High School.

“What I’m concerned about is … they might consider the high school more of an opportune place to hold protests, and it would invite that kind of disruption,” Margo said.

That sentiment was echoed by the council, which opted to tailor the ordinance to include a 100-foot buffer for the high school.

The entire council appeared disgusted by the incident and expressed disbelief that it had to pass such a measure.

“There are even people that I know in this community that haven’t had the vaccine, and they too [are] mortified by what occurred last week,” Vice Mayor Lili Bosse said.

Mayor Wunderlich said the incident “was simply horrific” and “can’t be allowed to happen again.” He asked the city attorney whether any of the protestors had committed crimes last week.

“Getting into a kid’s face, getting a foot away from the kid, and screaming at that kid, and obstructing that kid from being able to walk forward with his or her parent, would meet my definition of assault,” Wunderlich added. “It seems like there should be a law against that already on the books.”

The ordinance, which has not yet been signed, applies to private schools as well. It prohibits demonstrations near elementary and middle schools from 7:30 to 10 a.m. and 1 to 3:30 p.m. and from 8 to 10 a.m. and 3 to 4 p.m. near Beverly Hills High School on days that school is in session. The ordinance specifically states that protests cannot be held 100 feet from the intersection of Durant and Moreno drives.

It also prohibits demonstrations that are “distinctly audible” within any classroom of a school building during school hours, as well as protests that are within 50 feet of a school playground.

Candidates face off in forum