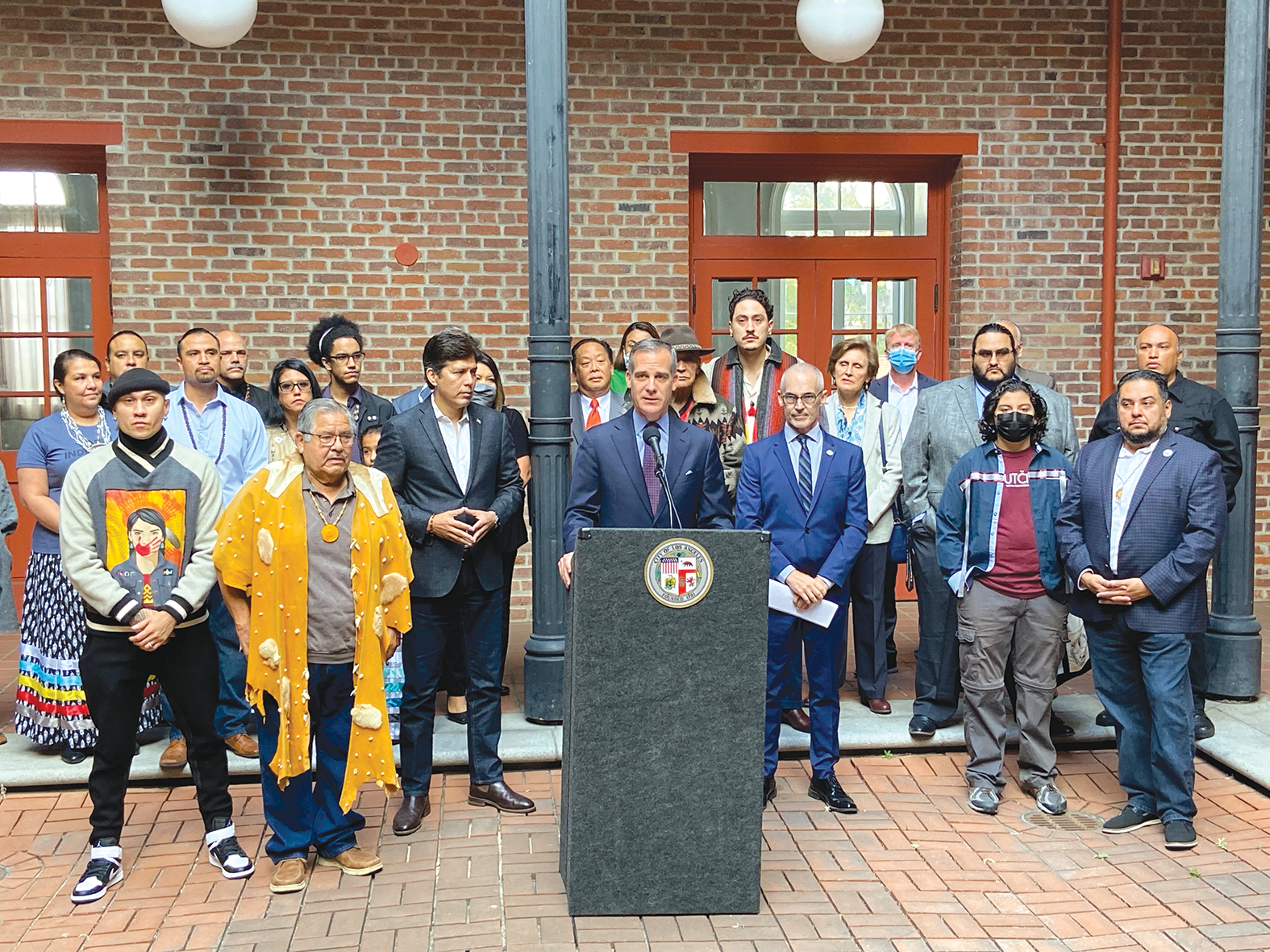 In a move to reverse decades of wrongdoing and rectify the unfair treatment of the Native American people of Los Angeles, Councilman Mitch O’Farrell on Oct. 12 introduced the Indigenous LAnd Initiative, a legislative package that calls for the city to formally apologize to indigenous tribes and change the official seal and flag, among other measures.

O’Farrell, a member of the Wyandotte Nation, announced the initiative on Indigenous Peoples Day, Oct. 11, which has been observed on the second Monday of October since 2018. The council president pro tempore gathered with Mayor Eric Garcetti, Councilman Kevin de Leon and members of the Gabrieleno/Tongva Band of Mission Indians and Fernandeño Tataviam Band of Mission Indians at Pico House, near Olvera Street, to make the announcement.

“All land is indigenous,” said O’Farrell, 13th District. “With the Indigenous LAnd Initiative, for the first time ever, we are putting Native American communities at the center of decision-making on issues related to our history and our future.”

Garcetti announced the city will rename Junipero Serra Park, located adjacent to the El Pueblo de Los Angeles Historic Monument and Olvera Street, in consultation with Native American leaders. The city will also create a special easement for Native American ceremonies at the park, and other locations on native lands to be determined.

“Los Angeles is a city of belonging that takes responsibility for the mistakes we’ve made in the past,” Garcetti said. “Our indigenous brothers and sisters deserve justice, and we take a step toward delivering both greater cultural sensitivity and spaces for Angelenos to gather and perform their traditional ceremonies.”

The Indigenous LAnd Initiative seeks to change the city’s seal to include representation of local indigenous tribes and people. The changes and design have yet to be determined and approved.

The seal currently has four quarters, with the two top sections depicting the United States and California flags, and the two lower sections featuring symbols signifying Mexico and Spain’s past sovereignty over the area. The city seal, adopted in 1905, also has a 77-bead rosary representing the role of the Spanish missions in California.

The park that will undergo a name change currently honors Father Junipero Serra, a Spanish priest who established the missions. To many Native Americans, he was behind the forced conversion of indigenous people to Catholicism and efforts to erase their culture. The park’s new name has not yet been established.

The Indigenous LAnd Initiative also calls for federal and state governments to rename the Christopher Columbus Transcontinental Highway, which includes the portion of the 10 Freeway in Los Angeles, with acknowledgement and respect for indigenous history, O’Farrell said.

“This initiative will bring critically needed visibility and substantive action, as several hundred years of genocide has led to a sobering and tragic reality in modern day Native America,” O’Farrell added.

The council president pro tempore also stressed that Native Americans continue to experience disparities in society. He cited higher mortality rates and greater susceptibility to mental health issues and many diseases as evidence of the need to create strategies that focus on the well-being of Native Americans. The Indigenous LAnd Initiative was referred to the council’s Rules, Elections, and Intergovernmental Relations Committee for consideration.

“We cannot erase the past, but we can make sure we shine a light on the truth,” O’Farrell said. “Together, we will move forward into a brighter future, propelled by a spirit of reconciliation and with a resolve to bring equity and justice to Native American communities in Los Angeles and beyond.”

“When we go from an era when were pushed off into the shadows and moved and forgotten to a point where this is the first mayor in L.A. who has acknowledged indigenous tribal communities … it’s uplifting a community that has been pushed aside for too long,” added Rudy Ortega, tribal president of the Fernandeño Tataviam Band of Mission Indians. “That’s what we look forward to. We know it’s a collaboration of working together.”