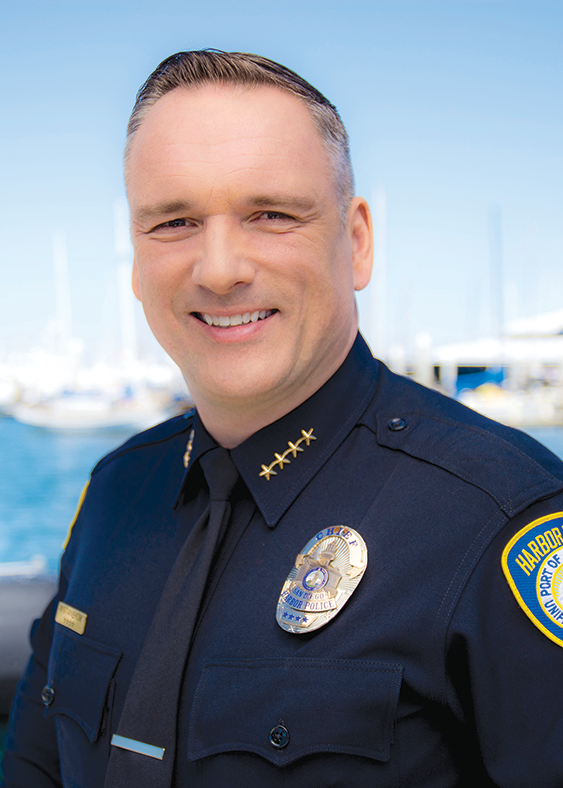 Mark Stainbrook, who is currently the chief of police and vice president of public safety for the Port of San Diego, will begin his new role in late November. In the interim, he said he will be studying city policy and agreements.

“Honestly, I’m just excited, and I’m ready to get to work,” said Stainbrook, who recently retired as a lieutenant colonel in the U.S. Marine Corps after 32 years of service.

The new chief will take over for Dominick Rivetti, who served as the interim police chief after Sandra Spagnoli retired in April 2020. Her tenure had been marred by lawsuit settlements and allegations of discrimination and retaliation that began in November 2018.

However, Stainbrook said he does not dwell too much on the past, and he sees the city and department having a bright future.

“My leadership style is a lot about the success of my people; I’m only as successful as they are,” he said. “My job is to go in and create an … adaptive organization where people can bring out the best in themselves. When a new leader comes in, that’s an opportunity for everybody to take a little bit of a fresh start.”

As far as combatting some of the high-profile crimes that Beverly Hills has experienced, such as the Il Pastaio robbery in March, Stainbrook said he believes that “everything goes back to the basics,” such as high-visibility patrols and community engagement.

“From what I’ve seen and what I’ve read about the work that the department’s doing, I think they’re doing a great job, and [I’m] very excited to come work up there,” he added. “I think there’s a lot of good police work going on, a lot of good community outreach going on.”

Additionally, Stainbrook said it appears that the city has a “pretty good game plan” when it comes to managing demonstrations, as Beverly Hills has had plenty of practice as of late.

“I think it’s always important to strike that balance of free speech and making sure people have the right to protest, but also that it’s done in a way where it doesn’t cause violence to others or damage property and those kinds of things,” he said, adding that he was aware of the incident that occurred on National Walk to School Day, when students encountered a group of anti-vaccine protestors.

Stainbrook said he was familiar with the racial profiling allegations that have been levied against the department’s Rodeo Drive task force, but he added that he does not know much more than the general public. However, equity in policing is of the utmost importance, he said.

“I’ve dealt with similar issues over the years and in my career, so I don’t tolerate any sort of racial profiling or [by] any other means. We have to follow the laws, the applicable policies and procedures. I worked counterterrorism for many years, and we kind of had similar concerns, for example, from the Muslim community. What we look at is behaviors, not a person’s race or ethnicity or gender or religion.”

In general, law enforcement has been under heightened public scrutiny over the last few years, but that presents the department with an opportunity for further community engagement, Stainbrook said.

“I think our communities want to get to know us, they want to know the challenges and they generally really want to be supportive, but we have to actually work hard to push out that narrative and we have to work hard to communicate the things that are going on. If we don’t, you know other people will.”

Stainbrook said he is grateful for the opportunity, though he is a bit nervous. However, he is familiar with entering a leadership position in a somewhat new environment (he knows the city fairly well from his time with the Los Angeles Police Department, which began in 1995).

After beginning his law enforcement career with the LAPD – where he served in the Hollywood, Central, West L.A., Pacific, Internal Affairs, Southeast and 77th divisions, as well as the Terrorism and Special Operations Bureau – Stainbrook joined the Port of San Diego as an assistant chief in 2011.

He said there are some similarities between Beverly Hills and San Diego. For one, they’re both high-profile tourist destinations. Both cities also have a high level of community service and a mindset that there is “no call too small,” Stainbrook said.

“Beverly Hills is a first-class, international city, and the thought of being able to work there and interact in that environment just appealed to me on a professional and career level. … And it was also a chance to go into a community that’s really supportive of law enforcement and really seems to have a good direction for the future.”

Attorney Brad Gage, who filed numerous lawsuits against the city and department while Spagnoli was chief, said he wishes the new chief success. He also has an ongoing class action lawsuit filed against the department in relation to the Rodeo Drive task force.

“I am hopeful that the new police chief will take on those problems and help to solve them and heal the wounds that have existed, both to members of the department and also the greater community,” he said, adding that he currently has an open case against the department on behalf of an employee. However, the allegations of discrimination and retaliation have “tapered a bit” since Spagnoli resigned, Gage added.

According to information supplied by the city, the internal panel that interviewed candidates consisted of McDonnell, Rivetti, Assistant City Manager Nancy Hunt-Coffey and Human Resources Director Shelley Ovrom. The 141 applicants were whittled down to 13 candidates, and then five were selected to interview with Beverly Hills City Council members, community members and other officials.

One application came from within the department, but the city declined to identify the applicant, citing confidentiality concerns.