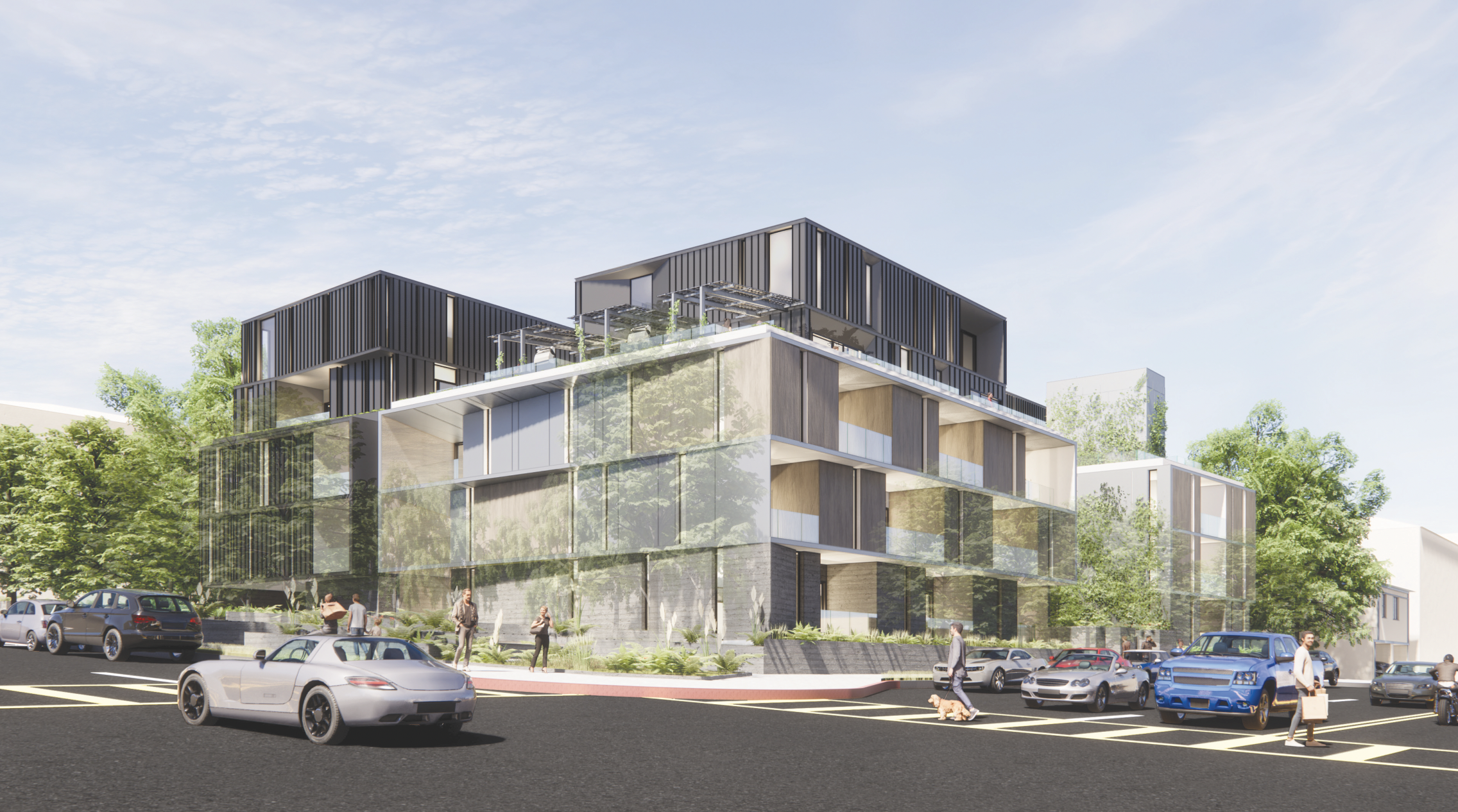 A residential structure planned on the eastern side of West Hollywood would use eco-friendly materials and include several gardens with native soil and plants. (photo courtesy of Tighe Architecture)

A vacant parking lot on the eastern side of West Hollywood could soon be replaced with an apartment complex designed with the environment in mind.

As proposed, an existing surface parking lot at the northeast corner of Crescent Heights Boulevard and Fountain Avenue would be replaced by a 43,906-square foot, five story building.

The structure would house 37 rental apartment units over two levels of subterranean parking. Six of the units would be set aside for affordable housing.

The applicant, Tighe Architecture, worked with the city to design an environmentally-friendly structure. The project will feature eco-friendly materials, several gardens featuring native soil and plants, and units with fresh air on at least two sides so they cross-ventilate, which requires less air conditioning.

A corner garden is planned at the intersection to allow a comfortable walking space and place for residents and neighbors to sit. The garden will foster an urban habitat, which often isn’t included in many projects, said Ric Abramson, the city’s Urban Design + Architecture Studio manager.

Because the project provides six affordable housing units, it is eligible for a 35% density bonus and qualifies for additional concessions. The applicant requested one concession to allow an additional five feet of height – bringing the building total to 50 feet – to allow five stories.

To enhance the pedestrian experience, Patrick Tighe, the principal architect, said the buildings closest to the sidewalk were designed to be only three stories tall. Five-story buildings will be constructed in the center of the property to ease the vertical scale along roadways.

Residents feared the black materials would draw attention to the taller buildings, which would defeat the purpose of the two-tiered structure. However, Tighe said the darker color helps emphasize the difference between the taller buildings and the buildings closer to the street.

The parking garage will house 73 single parking spaces, and the entrance will be located off Crescent Heights Boulevard, away from the intersection.

A new parking lane will be added along Fountain Avenue, as well as five on-street parking spaces. A pickup and drop-off area will be located in front of the main entrance to allow easy access for residents.

Commissioners said the project took into consideration the needs of the neighborhood and commended its commitment to sustainability. The proposal was approved unanimously and will now be referred to the City Council.

“I’m just shocked,” said Chair Lynn Hoopingarner. “There’s more street parking. We’re getting more trees than we’re cutting down. All of these things never happen in our projects, and I’m very pleased to see them. I’m hoping to see more of this type of development throughout our city.”

The Wiltern, an unlikely nonagenarian