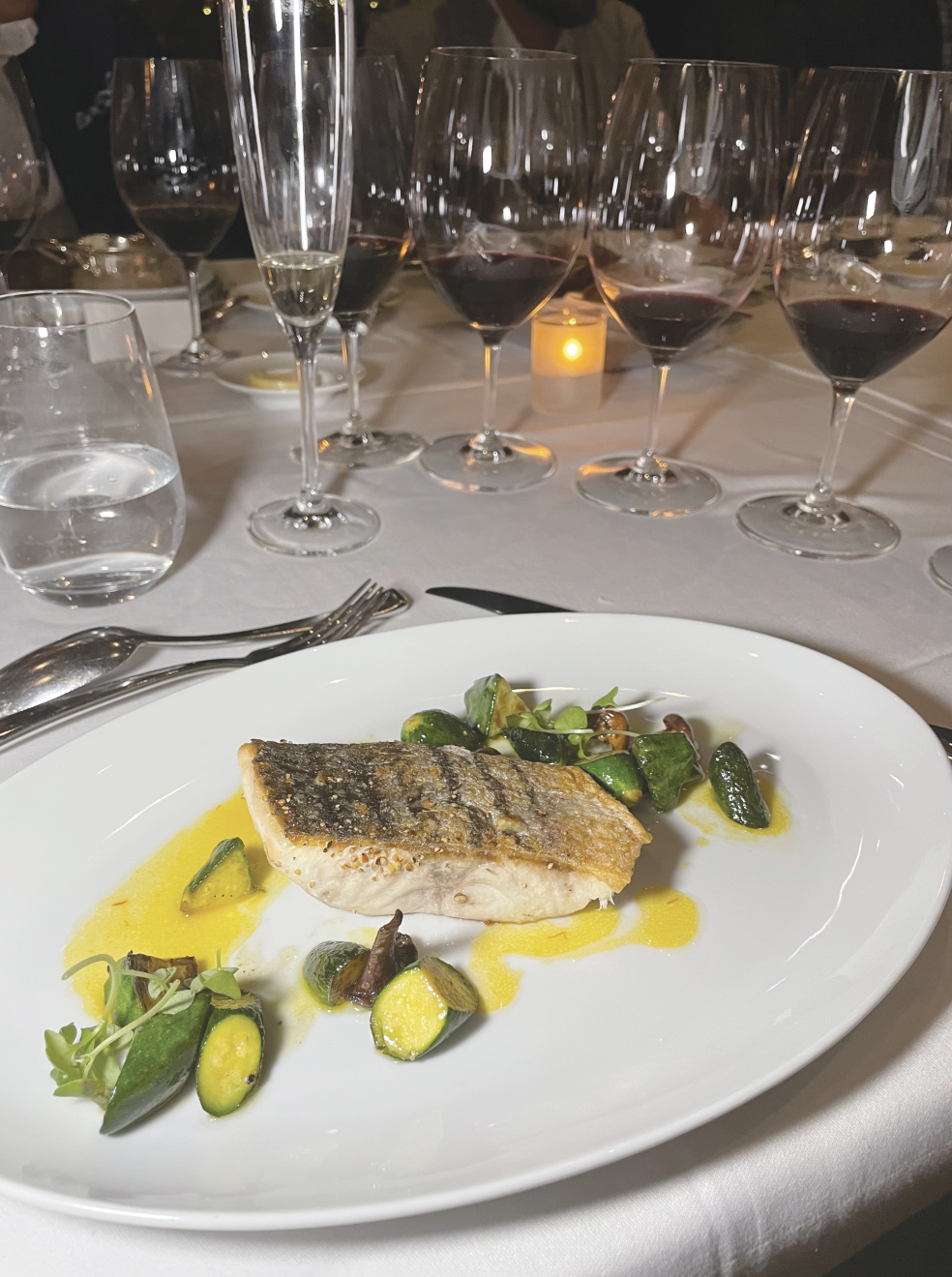 Strolling across the iconic, gable bridge at the Hotel Bel Air, the swans welcomed me as a night of luxury awaited.

Last week, I joined a group for a special Vérité wine dinner at Wolfgang Puck at Hotel Bel Air. The dining room at Wolfgang Puck offers seating in private alcoves with a view overlooking Swan Lake, which is home to swans Hercules, Athena, Odette and Chloe.

As I continued my idyllic promenade, I was eager to experience some of Puck’s new autumn-inspired dishes paired with red Bordeaux wines from Vérité in Sonoma County.

After I found my place setting at an elegantly-decorated table on the terrace, I was presented with a flute of Charles Heidsieck Brut Reserve to sip while perusing the vibrant California menu infused with Mediterranean influences.

I selected the baby hearts of romaine Caesar salad, which was served with a crouton covered in soft cheese and fresh herbs. A ruby-violet La Muse 2018 was the first of three 2018 Vérité wines poured. The beautiful merlot-dominated wine offers aromas of ripe plum and spices. The red and black fruit flavors were enhanced by a hint of cocoa that lingered on the finish.

Others at the table ordered the house-made saffron campanelle “Cacio e Pepe” pasta with Maine lobster, lemon, chives and Sarawak black pepper. They preferred sipping the 2018 Le Joie, made predominantly from Cabernet Sauvignon, with this dish.

Le Joie blends Merlot, Cabernet Franc, Petit Verdot and Malbec with the Cabernet. The wine was fruit-forward in aromas and flavors, featuring ripe black cherry followed by earthy notes. The refined tannins and well-balanced acidity were a perfect pairing for the richer, savory dish.

The 2008 is a Cabernet Franc blended with Merlot, Cabernet Sauvignon and Malbec. Each sip offered a concentration of fruit with a hint of exotic spice, opulent aromatics and a soft texture. Six of the last seven vintages of this singular Bordeaux blend achieved scores of 95 or higher.

The 2018 blend offered a persistent finish and bright acidity, which is excellent to drink now, but given time, it will evolve beautifully in a cellar.

When it was time to select entrees, some chose the roasted local bass served with slices of kabocha squash and tender sunchokes. Grill marks on the skin added a crunch to the moist, tender white fish.

Others ordered the USDA Prime New York sirloin steak paired with one of the first Vérité wines produced, a 1998 La Joie. The majority-Cabernet Sauvignon blend contains Merlot, which create a dark and deep garnet.

Its pleasing bouquet includes ripe strawberries, dried rose petals and a hint of pine. After one sip, I noticed layers of holiday spice, pine needles and a touch of cocoa. The aged wine had a luscious, soft finish.

The exquisite evening finished with a flourless chocolate cake and a small caramel apple vol-au-vent served on a sphere of puffed pastry. An edible gold flake added a touch of elegance to the dessert’s beautiful presentation.

While enjoying the two-hour dinner, I learned that Vérité is part of the Kendall-Jackson wine empire. In the late 1990s, Jess Jackson and his wife, Barbara, lured French winemaker Pierre Seillan to Sonoma County to help make some of the best Boudeaux-style blends in California.

Their son, Christopher Jackson, is now the proprietor, and Pierre Seillan’s daughter, Hélène, is the assistant winemaker. With more than 50 “micro crus” across four appellations, the Jackson and Seillan family carefully craft each blend of Vérité to create some of the most opulent and powerfully-pleasing red wines in the world.