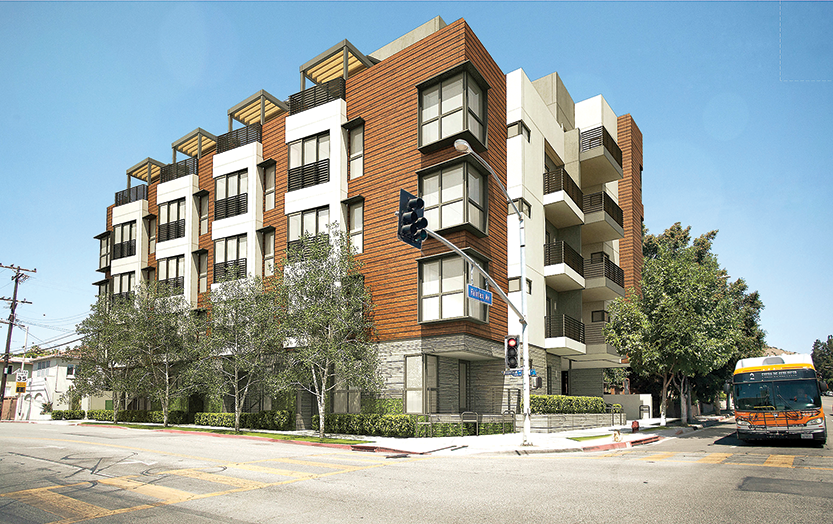 FF1 LLC is looking to build a five-story, 18-unit building at the northwest corner of Fairfax and Fountain avenues. Opponents of the project contend that the co-living element of the proposal will lead to increased traffic and parking issues. (rendering courtesy of Levin-Morris Architects)

The West Hollywood Planning Commission on Sept. 2 narrowly-approved a controversial co-living proposal that would add 18 units – including 73 co-living bedrooms – and 32 parking spaces to the northwest corner of Fairfax and Fountain avenues.

Attorney John B. Murdock, who is representing property owners to the north and west of the proposed project site, said his clients will appeal the 3-2 decision to the West Hollywood City Council.

Opponents argue that the project would bring additional density, traffic and parking issues to an area that already suffers from these problems.

“That’s a major concern to the residents,” Murdock said. “It’s a quality of life issue. Nobody’s against having shared apartment buildings if the traffic and the area can handle it, but this area’s … heavily trafficked already.”

Edward Levin, a principal of Levin-Morris Architects, the project’s architectural firm, said there are no “legitimate” grounds for appeal and that the planning commission’s decision was “correct as a matter of law.” He said the developers, FF1 LLC, have altered the proposal in recent weeks to mitigate parking concerns, especially concerns related to deliveries.

According to planning documents, FF1 LLC sought concessions and waivers for a five-story, 18-unit building that would be more than 28,000 square feet. The project would also have two floors of subterranean parking.

In a report, city staff referred to co-living as a “configuration that is new and dynamic for the city” and noted that co-living projects in other, unspecified cities have helped the housing crisis in those areas.

Murdock said the co-living units are “single-room occupancy” units, as they are single bedroom units being leased to single individuals.

Levin said the units are not single room occupancy units and that the developers are legally obligated to provide just nine parking spaces. He said SROs are more or less a bedroom.

“This building is essentially four- and five-bedroom apartment units,” Levin added. “They’re not SROs. They can’t legally be SROs, because the bedrooms each have a private bathroom … but [they have] no kitchen sink and no kitchen counter. As with any apartment, that’s not in the bedroom. It’s in this kind of living room/kitchen area that’s shared by four or five residents and bedrooms. This is called co-living, and it’s fairly new in West Hollywood.”

Murdock said it would inevitably be up to a court to decide.

“The city council can definitely overturn what the planning commission has done if they agree that this is really an SRO,” he added. “It’s individual renters who are taking individual bedrooms, which is exactly what an SRO building is. And that requires a conditional use permit.”

During the planning commission meeting, several residents remarked on the dangers of the intersection at Fairfax and Fountain. Resident Steven Nash referred to it as “intensely busy,” and resident Andrea Whitfield wrote that it is “prone to some hair-raising auto accidents.”

Levin said there is a reason that the northwest corner of that intersection has gone undeveloped for many years.