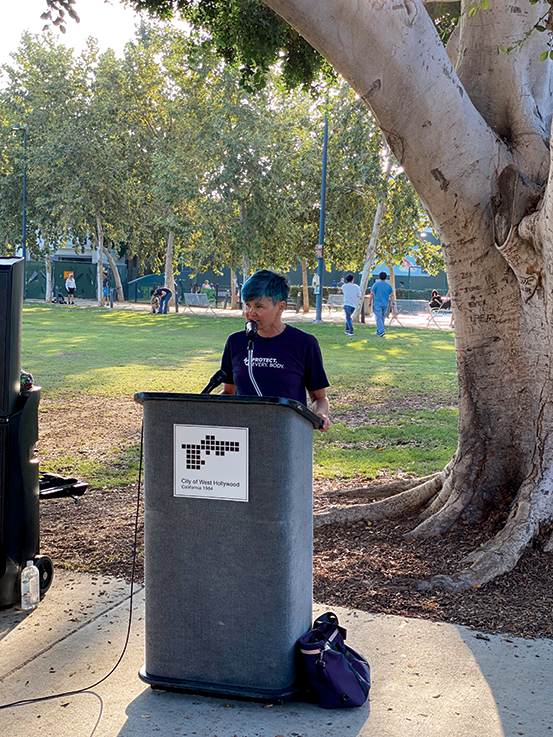 Since the passing of a Texas anti-abortion law, West Hollywood residents have rallied and begun organizing events to support a woman’s right to choose.

“We must always make sure that people understand that we are an open and supportive community for those seeking reproductive health care, especially in today’s world when everything seems to be under attack,” said Councilman John Erickson, who also works for Planned Parenthood.

The new law, Texas Senate Bill 8, prohibits abortions as soon as medical professionals can detect a fetal heartbeat, typically around six weeks after conception. There are no exceptions for rape or incest.

The bill also allows private citizens to sue individuals who help women seek an abortion, including medical professionals and anyone who drives a woman to a clinic.

Supporters of the bill have launched a website for anonymous tips. Anyone who successfully sues another person would be entitled to at least $10,000 and the cost of attorney’s fees.

“This goes beyond a violation of privacy. The Texas law institutes state-sanctioned discrimination and hatred toward people seeking safe access to reproductive health care,” Mayor Lindsey Horvath said. “We know this law will not stop people from seeking abortion. It will only put them in greater danger while doing so.”

The Supreme Court on Sept. 1 voted to deny an emergency appeal that would block the Texas law. After the court’s decision, city leaders and residents gathered in West Hollywood Park for a rally.

Erickson said the support shown was moving, but the involvement can’t stop there. In his role as director of public affairs for Planned Parenthood, Erickson said he’s already seen the effects of some abortion laws.

“I think we’re making progress here in California. We’re expanding care, we’re fighting back,” Erickson said. “It’s all hands on deck making sure that we’re providing care to those individuals and patients who are not only in Texas but other states that are already passing similar laws.”

In the last year, Planned Parenthood L.A. served 7,000 women from out of state seeking health care, he said.

Though some women may still be able to seek out-of-state care, Shannon Morton, a member of West Hollywood’s Social Justice Task Force and founder of Black Women Lead, said Texas’ law will have a greater impact on Black and Latina women.

“There are a few privileged women with more means, who have enough money to go to a different state,” Morton said. “This legislation is directly affecting Black and brown women and girls, and I think that we have to look at this for what it is. It’s a full assault on their livelihood.”

Morton said the Supreme Court’s decision is a direct attack on Roe v. Wade, which legalized abortion in 1973. She said residents need to take action to protect themselves from “copycat” bills that could make their way through state legislatures.

“Every woman – it doesn’t matter what state you’re living in – should be pushing your state to codify Roe v. Wade into their law,” she said. “You don’t want to live in a state like Texas, where politicians can just strip away your rights like that.”

Erickson said residents should vote in local elections, participate in women’s marches and write their elected officials about the change they’d like to see at the local level.

Women’s March Los Angeles is planning a rally in defense of reproductive rights on Oct. 2.  Black Women Lead is planning a nationwide demonstration in Texas on Oct. 23. Such efforts, Morton said, will send local officials a message about where the community stands on abortion rights.

“There are many red states that are going to hop on this train. This is just the beginning,” she said. “We just have to give them hell until we see the change that we want.”

Abortion is not “health care.” Nor should it be considered birth control. Abortion is a bad thing, although sometimes it’s necessary, but let’s be honest about what it is and acknowledge that in an ideal world it would not take place. I am pro choice to a point – that point being longer than six weeks, but certainly not longer than 10 weeks. I’m sorry if that offends my fellow women, but that is a precious human life you’re carrying, one that many women are not able to and wish they could. So get off your political soapbox and stop being so selfish.