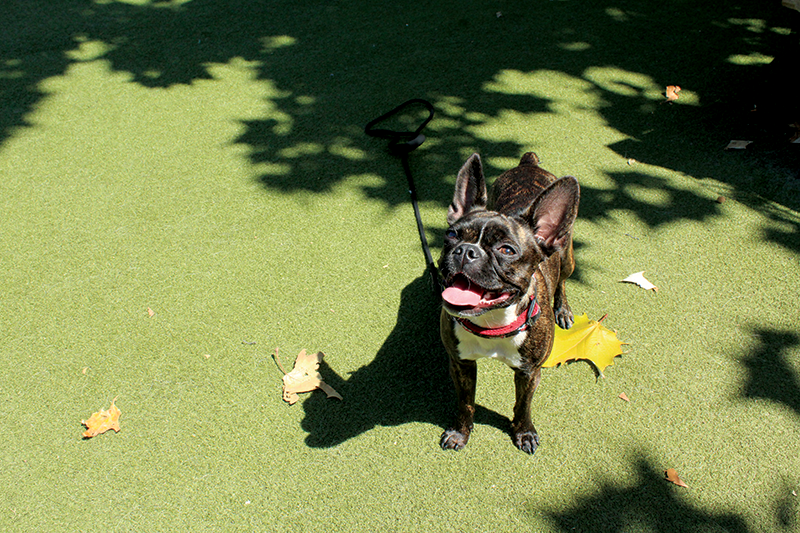 Juno, a Boston terrier, plays in the West Hollywood Dog Park on Sept. 14. The park is being considered as a possible location for a pet tribute. (photo by Brynn Mechem)

A tribute to remember pets and companion animals that have died could be on its way to a West Hollywood park.

In December 2019, the City Council first directed staff to evaluate community interest in establishing a memorial at one of the city’s parks.

Though planning for the tribute is still in the early phases, facilities and field services manager Helen Collins said a potential tribute could include a water element, a stand-alone monument, an arbor, benches or a quiet place for reflection.

The idea was first brought forth by Mayor Pro Tempore Lauren Meister, who said a tribute could help residents remember important members of their family.

“I think it’s very obvious that West Hollywood residents love their animals,” Meister said. “The truth of the matter is that we probably have a higher percentage of people who have pets than we do children, and for many of us, our animals are our children, so that’s why this is so important.”

After surveying residents throughout the summer, senior administrative analyst Erin Hamant said the respondents were split almost evenly when asked whether the city should have a pet tribute.

Of the 244 submissions, 129 people, or 53%, were in favor of a pet tribute at a City park. A portion of those favor said they’d like to see city funds used toward something else or the project move forward with private funds. The remainder of the respondents, 115 people, or 47%, were not in favor.

Given the choice between the city’s parks, respondents highlighted West Hollywood Park as the favored place to install a tribute, followed by Plummer Park and Hart Park.

Collins said any potential tributes at West Hollywood Park and Hart Park could be located near the existing dog parks. At Plummer Park, a tribute could be added along Vista Street where a temporary dog play area is planned.

Though a potential tribute would be located next to a dog park, Collins said it would be for all pets, not just dogs and cats. 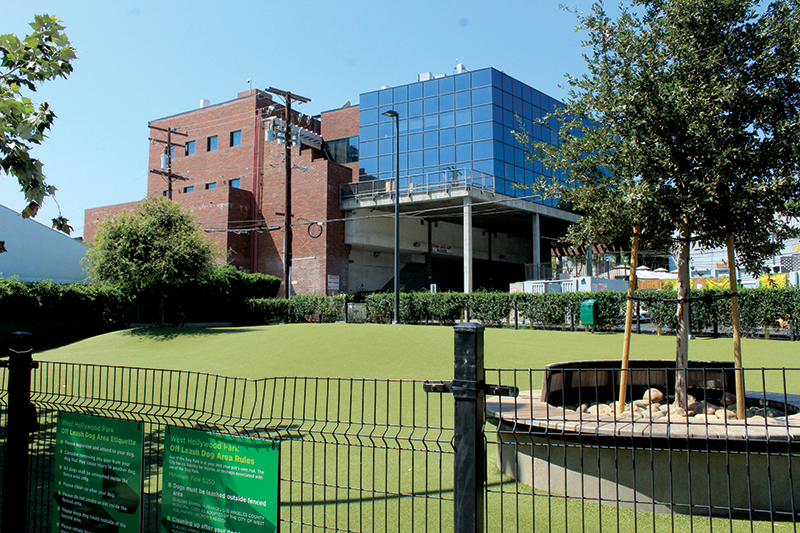 An area near the West Hollywood Dog Park is under consideration as a potential location. (photo by Brynn Mechem)

“We remember the dogs, we remember the cats, but we understand our community members also have other pets or animals that they want to be remembered,” Collins said. “This would absolutely be for all pets. We don’t want to leave anyone out.”

During a public input meeting on Sept. 14, several residents were in favor of a tribute, but questioned whether a portion of it could be personalized with plaques or commemorative bricks to remember specific pets by displaying their name and the years they were alive.

“I think these would be a great idea so in our mind, our pets would always be at the park, which is often their happiest place,” West Hollywood resident Rafael Kouyghadosh said. “I would have no problem paying whatever the cost is, but my dog was always happy at the park so if I could put something there to remember him, I’d be ecstatic.”

Plaques could be displayed on a wall near the dog park, or a commemorative brick-laid walkway could lead to the dog park, he said.

However, some residents said adding a payment option wasn’t a good idea for a tribute that is meant to be inclusive of all.

“It is so appreciated that people would think of our animal loved ones as part of our community and to create a space to recognize the entirety of their lives,” West Hollywood resident Chelsea Byers said.  “But I fear that a pay-in system will leave some out, and I don’t want anyone to feel left out when this is such a beautiful concept.”

Instead, she envisioned a space where anyone who has lost a pet can go to feel connected to the community. A poem or statement that captures the love between an owner and pet could be placed in the space, Byers said.

Hamant said staff will consider the cost estimates of the most popular community suggestions to craft a recommendation to bring before the City Council by the end of the year. Cost estimates are still unknown, she said.

If the council approves a pet tribute, it could be added as early as next year.

Another community input meeting is scheduled at 10 a.m. on Saturday, Sept. 25. To register, visit weho.org/calendar.