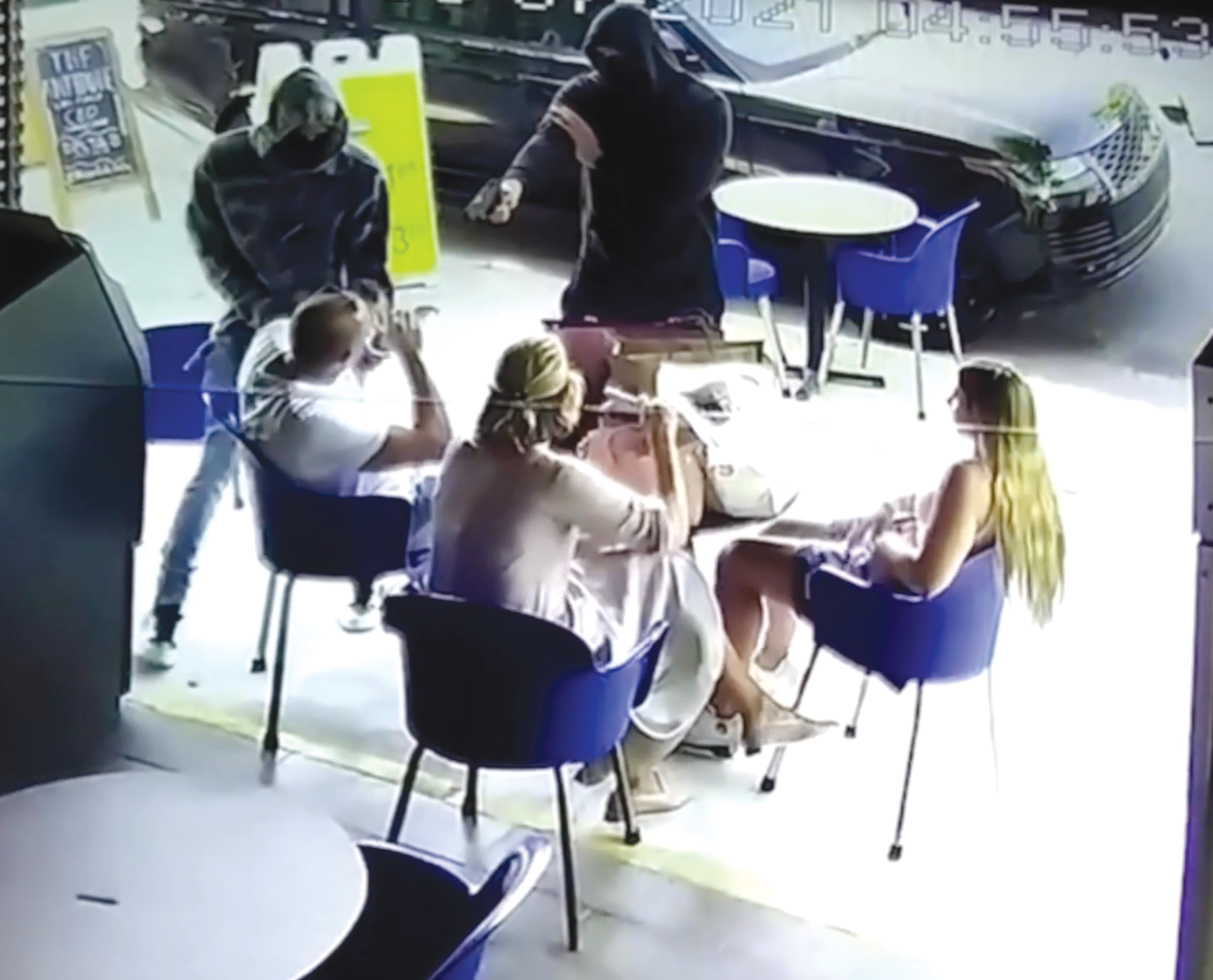 Two men captured on video robbing victims at a restaurant on Melrose Avenue are still being sought by police. (photo courtesy of Melrose Action Neighborhood Watch)

One suspect has been charged with robbery and remains in custody on $200,000 bail in connection with a series of armed hold-ups, including a robbery outside Le Crème Cafe on Melrose Avenue on Sept. 7 that was captured on security camera video.

Police are still searching for two other suspects who are believed to be involved in the robbery spree. The suspect in custody, Quioness Wilson, 23, was arrested on Sept. 8 in the city of Pasadena. He is believed to be the getaway driver in the robberies.

“The investigation is ongoing, and we have no further comment,” said Lt. Ben Fernandes, of the Los Angeles Police Department’s Robbery-Homicide Division. “We have a total of three suspects, with one in custody. That’s all we can provide at this point.”

The three men allegedly committed three robberies on Sept. 1 and four robberies on Sept. 7, including the hold-up at La Crème Café and another robbery that occurred in front of a vacant business at 7726 Melrose Ave., police said.

Two additional robberies allegedly tied to the three suspects occurred on Sept. 7 at 1716 Whitley Ave., in Hollywood, and at 939 S. Hill St., in downtown Los Angeles. The suspects also allegedly committed a robbery on Sept. 1 near Melrose Avenue and Gardner Street, and two other hold-ups near Eleventh and Santee streets, and at 504 W. Olympic Blvd., in downtown Los Angeles.

On Sept. 14, another suspect robbed a clothing store in the 7800 block of Melrose Avenue at approximately 12:30 p.m. Detectives with the Los Angeles Police Department’s Wilshire Division are investigating the incident, which was caught on security camera video.

The suspect confronted an employee, pointed a handgun and demanded that he fill bags with clothing, shoes and money. The suspect fled on foot.

The robberies in the Melrose District are the latest in a series of crimes that have caused concern among residents and business owners. The LAPD has deployed numerous resources to the area, including extra patrols, Los Angeles City Councilman Paul Koretz, 5th District, said. Authorities and the city are using every tool available to stop crime in the area, he added.

“We keep adding more and more resources to keep Melrose safe,” Koretz said. “We are doing everything we can to protect the community.”

The robbery outside the Le Crème Café was widely broadcast by television news media and renewed calls for more proactive policing in the Melrose District. Peter Nichols, co-founder of the Melrose Action Neighborhood Watch, said the organization was recently registered as a nonprofit and is in the process of raising funds for more security cameras along the Melrose Avenue corridor. The plan is to purchase 20 license plate recognition cameras and install them on private property. The Melrose Action Neighborhood Watch is working on the logistics with the LAPD, and data and images captured by the cameras will be sent directly to the police department. Nichols has started a GoFundMe account to raise money for the cameras, and so far it has generated approximately $4,000. He said people wishing to help should visit the website at melroseaction.org. The goal is to raise $35,000.

“We are calling it a crisis of crime. It’s crazy,” Nichols added. “We are trying to move this initiative forward and raising money to support it. We have to have as many cameras as we can. They will all be placed on private property, and we are doing it this way because we don’t want to get into the bureaucracy of the city and have it take years to implement. We need quick action, because we really feel like it’s a crisis of crime around here.”

Former Mid City West Community Council chairman Scott Epstein, who is running for Los Angeles City Council’s 5th District in 2022, is planning an “urban hike” at 10 a.m. on Sunday, Sept. 19, beginning at Poinsettia Park, 7341 Willoughby Ave. Epstein is planning to highlight some of the efforts he hopes will improve the area. He previously supported changes under the Uplift Melrose plan, an effort that would have brought pedestrian improvements and a reduction in traffic lanes in the neighborhood. That plan was not supported by Koretz, stating it would have caused traffic congestion on other streets surrounding Melrose Avenue.

Police are asking for the public’s help in identifying the other two men involved in the robbery outside the Melrose Avenue café. They can be seen wearing black hooded sweatshirts and face coverings in the video.

Detectives with the Robbery Homicide Division identified a vehicle allegedly used in the robberies and tracked it to Pasadena, where they arrested Wilson. A search warrant was served at Wilson’s residence, and police said evidence linking him to the robberies was located.

“We are disturbed by this brazen daytime robbery, which was captured on video, and we are committed to fighting violent crime and using all our resources to keep all Angelenos safe,” LAPD Chief Michel Moore said in a statement shortly after Wilson was arrested. “Detectives are investigating and asking for the public’s help for any additional information.”

Anyone with information about the crime spree is urged to call the Robbery Homicide Division at (213)486-6840. During weekends and off-hours, call the LAPD’s hotline at (877)LAPD247.

Video of the Sept. 14 robbery can be viewed by visiting lapdonline.org/newsroom/news_view/68014. Anyone with information is urged to call detectives at (213) 922-8217.

The City has been two steps behind this entire time. Countless safety town halls with LAPD saying there just aren’t enough resources to stop all crime, and the council office saying while they support the community and all the ways we want the City to help make it safer, they can’t wave a magic wand to get those asks for us. I’m glad they are finally giving it the attention it needs, but sad that it took so many robberies and shootings before they got there.

Regarding the Uplift Melrose plan, it was an application for grant money to overhaul the street. There was no guarantee that the City would be awarded the funds. Even if we had, the project would’t start for at least five years. Crime is bad now, and pointing fingers about Uplift Melrose is a distraction.

How is a grant we were never guaranteed to get, for a project that never went through any meaningful community impact/traffic studies that is five years away from breaking hypothetical ground, supposed to solve the serious crime wave of TODAY along Melrose?

How about insisting on better security, like armed guards, at the sneakers stores? We all know that’s where all the crime is happening, and we know who’s doing it. But no one is allowed to talk about it.

I think Koretz lack of support for Uplift Melrose reflects how passively unengaged he is with his constituency. No proactiveness until there’s a severe crisis in the community. It’s the normal in the City of LA. The council members have extreme autonomy over their districts, and have little pressure to perform beyond the bare minimum. The council needs to be democratized; expand the membership so each councilmember is not representing so many people (200,000+), and have them work in tandem with the neighborhood councils, who are actually connected with their respective communities. Give these people some agency over their neighborhoods!