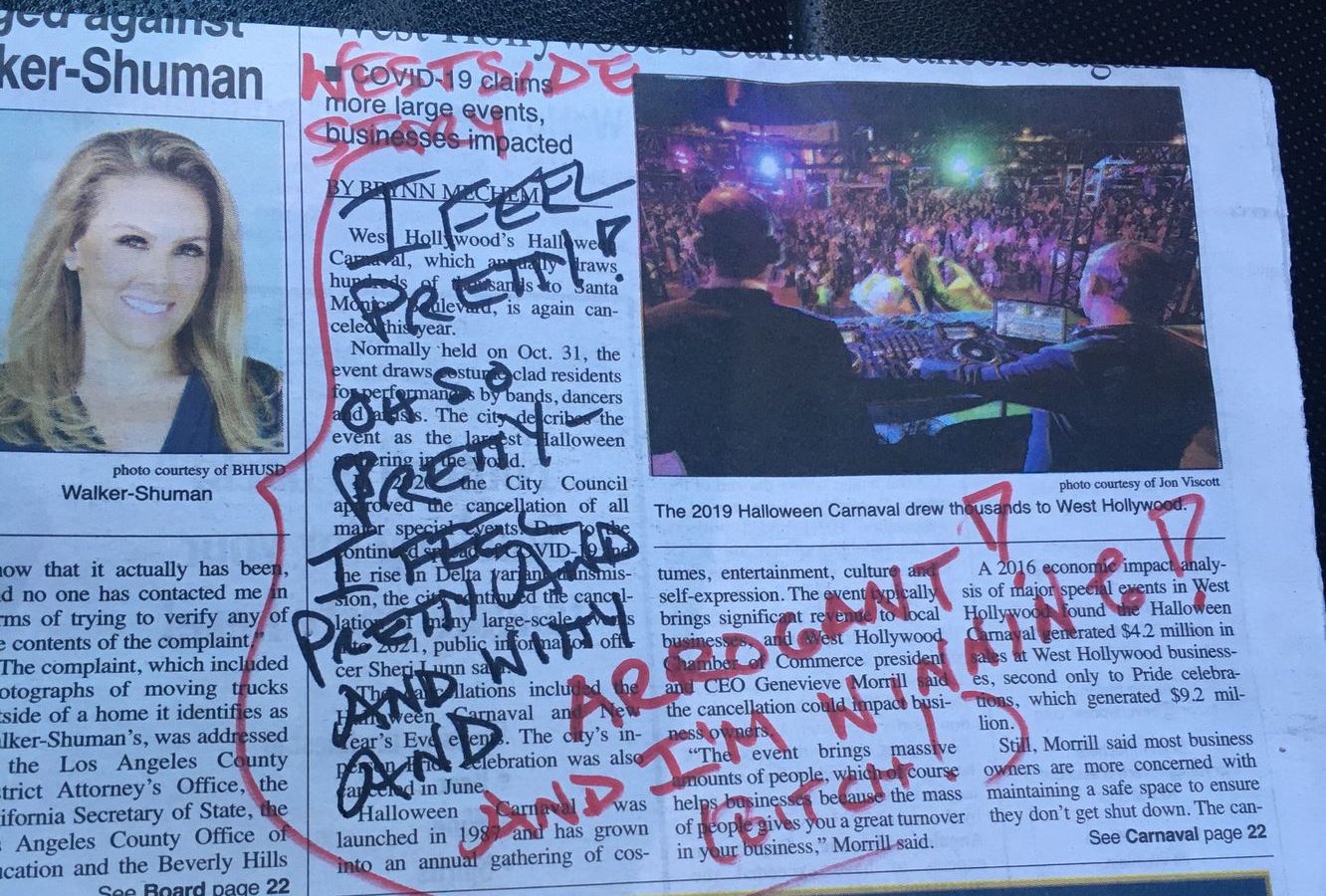 A Sept. 9 edition of the Beverly Press was tampered with and mailed to an individual affiliated with BHUSD on Sept. 22. (photo courtesy: anonymous)

Beverly Hills Unified School District Board of Education Vice President Tristen Walker-Shuman announced at noon on Sept. 22 that she will step down from her position effective immediately.

She said the controversy surrounding her residency had become too much of a distraction.

“I have dedicated myself to tirelessly serving the district, our students and families for years at great sacrifice and personal expense,” she said. “I am proud of the work accomplished over the last three years. BHUSD has never been in a better fiscal position, our construction program is humming, we have expanded pathways and opportunities for students in addition to support through reconfiguration. I am no longer willing to sacrifice my personal peace, my family or my time to oppose the current malign efforts. This manufactured issue has become an untenable distraction at a time when all of our efforts should be focused on servicing our students and recovering from the ongoing pandemic. Therefore, I am stepping down from my position as board member effective immediately.”

At the beginning of the month, a complaint was sent anonymously to several governmental agencies and media outlets, accusing Walker-Shuman of serving on the board while living out of state.

The board vice president denied the allegations in interviews and during board meetings, and she produced copies of her driver’s license and mail-in ballot. Walker-Shuman was adamant that the complaint would fail, even after the board voted to hire independent counsel to investigate the matter.

On Sept. 15, a representative of the Los Angeles County District Attorney’s Office said its Public Integrity Division closed the investigation into the complaint and said that the division would take no further action.

Walker-Shuman posted online that the Los Angeles County Office of Education had closed its investigation of the complaint as well. However, attempts to reach the office for confirmation were unsuccessful.

In a statement, BHUSD Superintendent of Schools Dr. Michael Bregy thanked Walker-Shuman for her service on the board.

Earlier in the day on Sept. 22, a person affiliated with BHUSD contacted the Beverly Press and said a copy of the Sept. 9 edition of the newspaper, which had been tampered with, had been sent to the individual using a Beverly Press envelope.

Next to the front page story about the complaint, someone wrote in all caps, “Westside story. I feel pretty! Oh so pretty – I feel pretty and and [grammatical error included] witty and arrogant! And I’m winning! (Bitch!)”

It was unclear who wrote the comment or mailed the envelope. No further information on that incident was available before press time.