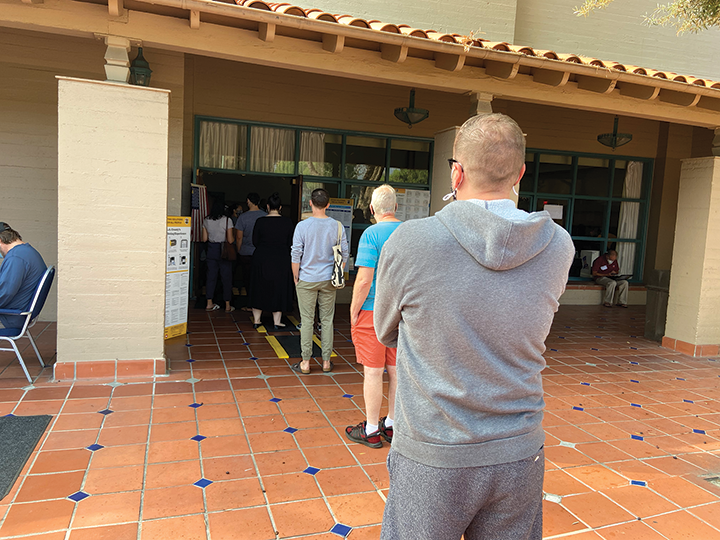 Lines formed outside a polling place at Plummer Park in West Hollywood. (photo by Edwin Folven)

Democratic California Gov. Gavin Newsom will remain in office after voters resoundingly rejected an effort to recall him on Sept. 14.

“California voted NO on the recall and YES to … Science. Women’s rights. Immigrant rights. The minimum wage. The environment. Our future,” Newsom said in a statement posted on social media after defeating the recall campaign. “We rejected cynicism and bigotry and chose hope and progress. Thank you, California. Now let’s get back to work.”

Voters were asked to select a candidate to replace Newsom if he was recalled, and Republican candidate Larry A. Elder received the most votes of the 46 candidates in the race. Elder garnered 498,173 votes in Los Angeles County, or just over 44% of the total number of votes among replacement candidates, according to the Los Angeles County Registrar-Recorder/County Clerk’s office.

“Let’s be gracious in defeat,” he told supports at an election night rally. “We may have lost the battle, but we are going to win the war.”

Elder has vowed to challenge Newsom again during the governor’s reelection campaign next year. Newsom has already created a campaign website outlining his positions.

Newsom garnered support from top Democrats including President Joe Biden and Vice President Kamala Harris. Local voters also appeared to strongly back the governor, and long lines could be seen at polling places on Tuesday, including a vote center at Plummer Park in West Hollywood.

The Los Angeles County Registrar-Recorder/County Clerk’s is still counting votes and had not released totals by precinct or community as of press time. Mail in ballots are still being counted, and the deadline for the recall election to be certified is Oct. 14.

Angelinos must be masochists. Homeowners in this area spend so much time battling against the Democrats in Sacramento or the LA City Council who want to eliminate single family zoning, that enable homeless encampments, or let criminals out of jail, and when they have a golden opportunity to get rid of them they go and vote for them again anyway. And then they repeat the process of fighting against them. If they voted for a Republican like Larry Elder all of those issues would be solved and would improve their quality of life. It’s insanity.