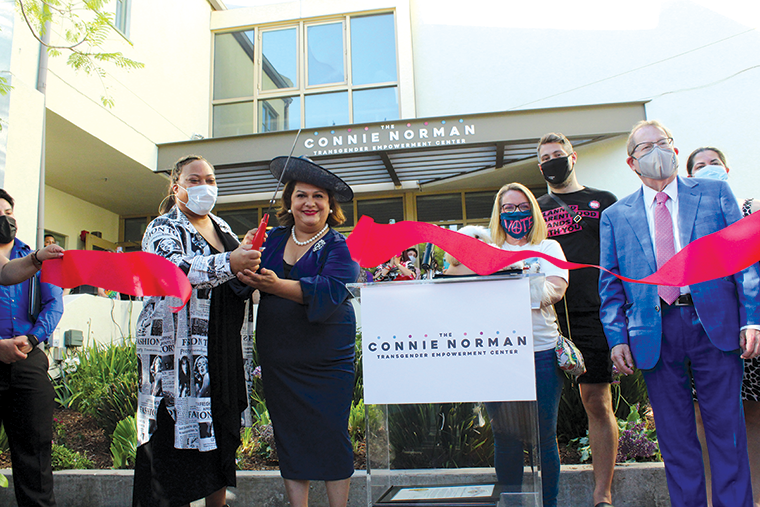 A center providing transgender and nonbinary individuals with job training and health services opened in West Hollywood on Sept. 10.

The Connie Norman Transgender Empowerment Center was founded by members of FLUX, a division of AIDS Healthcare Foundation focused on serving the transgender and gender non-conforming community, and Unique Woman’s Coalition, an organization that helps trans individuals obtain IDs and legal documents.

“We will be the first center in the world not only focusing on direct services, but focusing on empowerment in the form of financial literacy, wealth management and building our capacity so we have sustainability,” Ortega said.

The center, built by AIDS Healthcare Foundation in the 1990s, previously accommodated Linn House, a hospice for people with AIDS. It is named after Connie Norman, a transgender and AIDS activist, nicknamed “the AIDS Diva,” who died of the disease in 1996.

Now, AHF, FLUX and Unique Woman’s Coalition teamed up to open the 20,000-square foot center, which will function similar to a WeWork space, serving as a home base for several trans-led organizations, including FLUX, the Unique Woman’s Coalition and TransCanWork, a nonprofit that helps trans people find jobs and trains employers on how best to support them.

“I am committed to making sure that as trans and nonbinary people that we are working together, because we are so much stronger together,” said Unique Woman’s Coalition president and CEO Chela Demuir. “There’s no need for us to work in silos. Let’s stop being the little liquor stores on every corner and finally come together to make one major shop here at this center.”

A food bank and a “clothing closet” are planned to open in the next few months and an AHF Healthcare Center serving the needs of trans and nonbinary individuals will open in 2022.

Organizations within the center will focus on building capacity, advocacy and overall health and wellness of the transgender and nonbinary communities, something model and actor Laith Ashley wouldn’t have imagined possible five years ago.

“The days that we are silent and that we, as trans people, are thrown to the outskirts of society are done and over with,” Ashley said. “It’s time that we come forward and we show that we are capable and that we’re supposed to take space in society and be successful. This building is going to help empower all of us to do that.”

Though the center will focus on making improvements to create a better future, it also will reflect on the city’s history and the activist who gave the center its name. Norman first began advocating for the trans community before the widespread use of the term transgender.

Norman was a member of Act Up Los Angeles and an advocate for the creation of AHF’s first AIDS care facility, the Chris Brownlie Hospice, where she died from AIDS after admitting herself.

“When Connie Norman was living her final days at Brownlie, she bequeathed her childhood teddy bear to me, asking that I please help look after her trans sisters and brothers she was leaving behind,” AHF president Michael Weinstein said. “I can think of no better way to honor that request than with this center.”

Norman’s teddy bear will take up residence at the new facility. Through a West Hollywood proclamation, Sept. 10 will also be known as Connie Norman Transgender Empowerment Day.