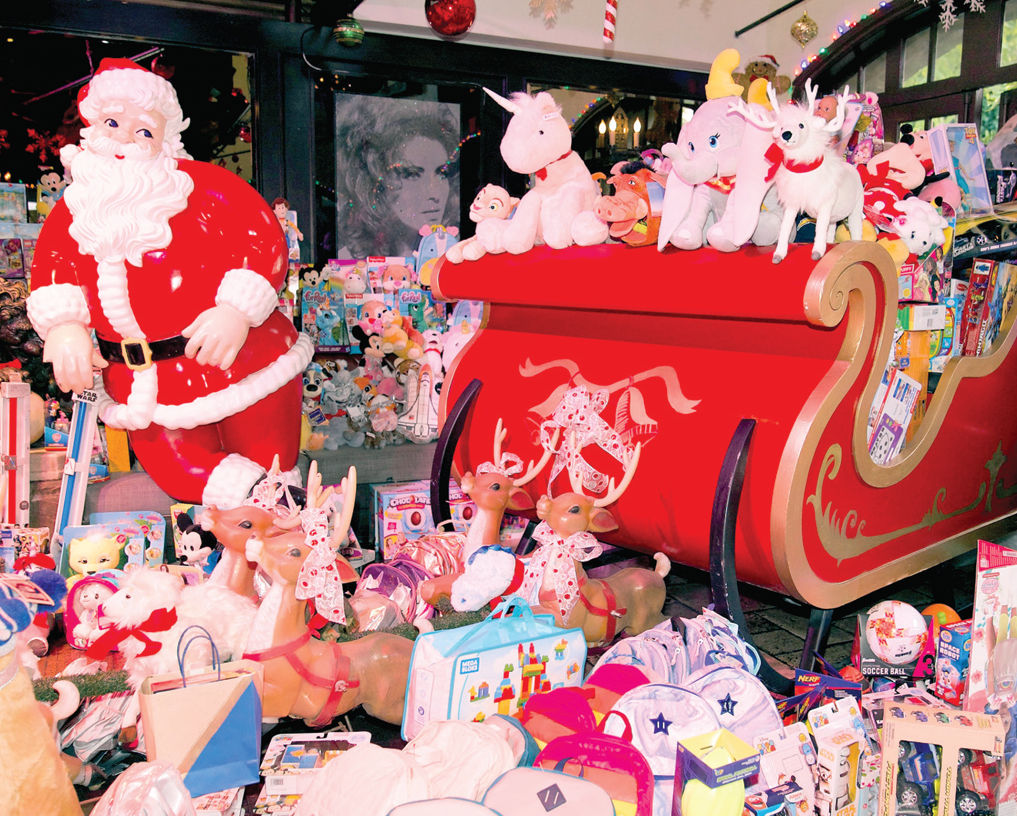 Patrons of The Abbey donate a mountain of toys every September. (photo courtesy of The Abbey)

West Hollywood may have its fair share of hills and steep in-clines, but they’re nothing compared to the mountain of toys collected annually by The Abbey and its patrons to support patients at Children’s Hospital Los Angeles.

For 16 years, the world-famous restaurant and bar has held its “Christmas in September” event to benefit CHLA, and its most recent fall holiday celebration was held on Sept. 21. The Abbey’s general manager, Todd Barnes, said the event is a gift that keeps on giving.

“We really have been able to fill the whole venue with toys,” he said. “It’s really amazing.”

More than a decade ago, The Abbey founder and CEO David Cooley met a gentleman at the bar and struck up a conversation. They discussed the man’s job at the children’s hospital and its need for toys in the fall, when its inventory runs low. Cooley offered to do a little promotion, and things snowballed from there.

“Over the years, it just grew and grew and grew,” Barnes said. “We had partners that joined in, and we’ve collected, I’d say, millions of toys since we started. We have some great partners that help us out in getting massive amounts of toys. It’s really just for the kids.”

The event itself is a celebrity affair. Elton John, Kyle Richards and the Kardashians are among past attendees and hosts. Fittingly, it snows on the red carpet prior to the event.

Barnes said The Abbey transforms into a “winter wonderland,” complete with elves, a “hunky” Santa Claus, a drag queen named Mrs. Claus and a DJ spinning Christmas music. Organizers bring in a giant sleigh to fill with toys throughout the evening.

Guests who bring an unwrapped toy for children up to 17 years old get a drink ticket from The Abbey’s beverage partner, which has been Ketel One the past two years. Everyone rocks Christmas gear or ugly sweaters. It’s just a lot of fun, Barnes said.

“Out of everybody, I think the owner, David, enjoys it more than anybody else,” he added.

“We’ve always given back to the community in so many different ways, and I think that this one is something that touches everybody’s heart when you know the sick children are in the hospital, and some of them are alone without their families. When you just know that they are going to be getting this toy, it just brings warmth to your heart. It all comes down to … this is for the kids.”

CHLA volunteer resources manager Rosby Lamm said “Christmas in September” is one of the hospital’s largest privately-held toy drives. She said the event at The Abbey is “truly magical” every year.

“I don’t know of a team that pulls off an event more fabulously and efficiently than The Abbey does,” Lamm added.

She said organizers at the restaurant and bar try to outdo themselves every year, and that “they are true to their word.” Even in the midst of a pandemic, participants still found a way to benefit CHLA patients.

The children’s hospital continues to see toy donations decrease in the fall each year, as most toy drives are held during the actual holiday season. However, the hospital’s needs are year-round, and the toys donated in West Hollywood go into “production” right away, Lamm said.

They’re used in every aspect of the hospital’s mission, and they are more than a toy or a gift. Toys enable team members to engage with patients and complement the bedside elements of the patient/caregiver relationship, Lamm said.

“Play is a child’s natural form of development,” she added. “Just because a patient or a child is in the hospital, that doesn’t mean that their development stops.”

CHLA is “eternally grateful” to the community for its generosity and The Abbey for being a “true and constant” partner throughout the years, Lamm said.

“I can’t thank them enough. I will sing their praises … forever.” CHLA collects toys year-round and is in constant need of baby rattles. To help, visit chla.org/toys.