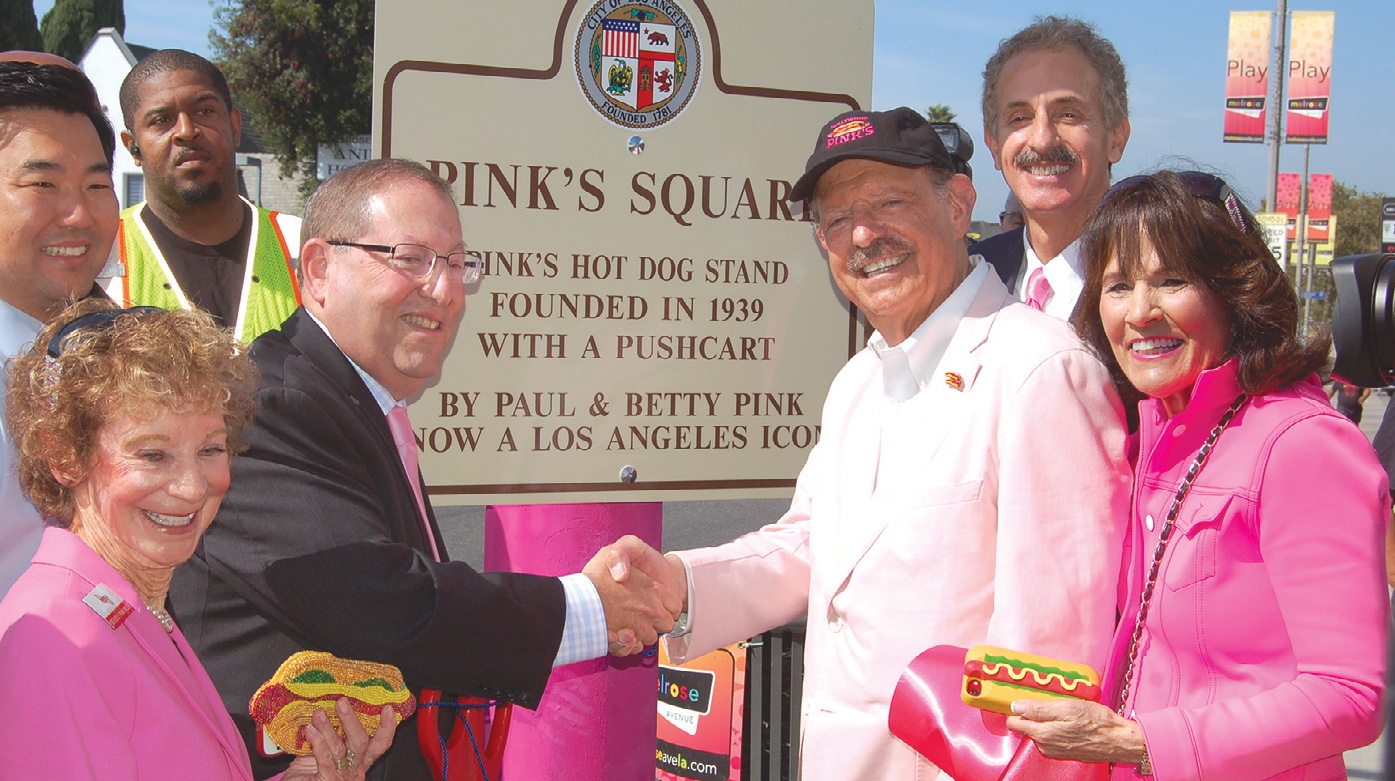 The city of Los Angeles dedicated the intersection of Melrose and La Brea avenues as Pink’s Square in 2018. (photo by Edwin Folven)

Pink’s Hot Dogs has been an L.A. destination for visitors from around the world since 1939.

From the moment you get in line at Pink’s Square near the corner of Melrose and La Brea, the smell of grilled hot dogs wafts over you. Pink’s offers sidewalk walk-up counter service by friendly employees who have worked at the stand for years. Owner Richard Pink, his wife, Glo-ria, and his sister, Beverly Pink-Wolfe, ensure that dining at Pink’s is a memorable experience. With 40 different hot dogs and 12 types of hamburgers, Pink’s offers something for everyone’s taste.

“Pinks represents history. It’s a commitment to serving the people of Los Angeles with great food,” Richard said. “It’s part of the culture of our city. Pink’s is a fun spot, and L.A. is a fun place. After all, L.A. is the entertainment capital of the world, and Pink’s is an important part of that.”

Pink’s Hot Dogs started when Richard and Beverly’s parents, Paul and Betty Pink, were looking to go into business for themselves. They saw an advertisement for a pushcart for sale and relished the opportunity.

“They found a site at the corner of La Brea and Melrose that was available for rent for $15 a month. My mother and father bought the cart and wheeled it all the way up La Cienega to La Brea and Melrose,” Richard said. “My mother and father went to work cutting down all those weeds in order to put that hot dog cart there. They sold the hot dogs for 10¢ to people who stopped by.”

Needing electricity, the Pinks bought a 100-foot extension cord from a nearby hardware store whose owner allowed them to run it down an alley and plug it into the store’s outlet. When their landlord raised the rent on the property in 1941 from $15 to $20 a month, the Pinks went across the street to a Bank of America branch and asked for a loan to buy the land.

“They told the manager that they were going to be put out of business because they couldn’t afford the rent, but could buy the land for $4,000. The bank manager asked if they had any collateral and they said, ‘No, all we have is a really good product,’” Richard said. “The manager said, ‘I don’t want you to leave. After all, where am I going to eat lunch? If you need $4,000, I’ll loan you the $4,000 so you can buy the property.’”

The success of the stand was just a matter of time, Pink added. In 1946, a cousin who was trying to break into the construction business built the Pinks a permanent stand – the same one still on La Brea Avenue today. Eventually, Betty and Paul Pink passed the business to Richard, Gloria and Beverly, who proudly operate Pink’s Hot Dogs.

“It’s always been a sidewalk counter that people could walk up to and smell the hot dogs cooking and see the buns steaming. It would really make you hungry,” Richard said. “We’ve basically been selling hot dogs like that now for 81 years.”

Today, the experience of dining at Pink’s is just like it was in the beginning, with some modern twists and a variety of tasty toppings. Pinks Hot Dogs has also been a celebrity haunt for years, and more than 300 celebrity photographs hang on the walls inside Pink’s. It’s not unusual to see someone famous in line at the stand. Some of the hot dogs are named after the celebrity clientele, such as the Brando Hot Dog, a 9-inch stretch dog with mustard, onions, chili and shredded cheddar cheese; and the Emeril Legasse Bam Dog, a 9-inch stretch dog with mustard, onions, cheese, jalapeno, bacon and coleslaw.

The Pinks are proud the city of Los Angeles designated the intersection of La Brea and Melrose as Pink’s Square in 2018 in tribute to the family and the hot dog stand’s contributions to L.A.

“It recognized that what was started as a little pushcart has become iconic in the city of Los Angeles. We were very proud,” Richard added. “Pink’s is now an institution. People come from all over the world to Pink’s. Some people tell me it’s the first place they visit when they come to Los Angeles. We are proud to be part of Hollywood and the city of L.A.”