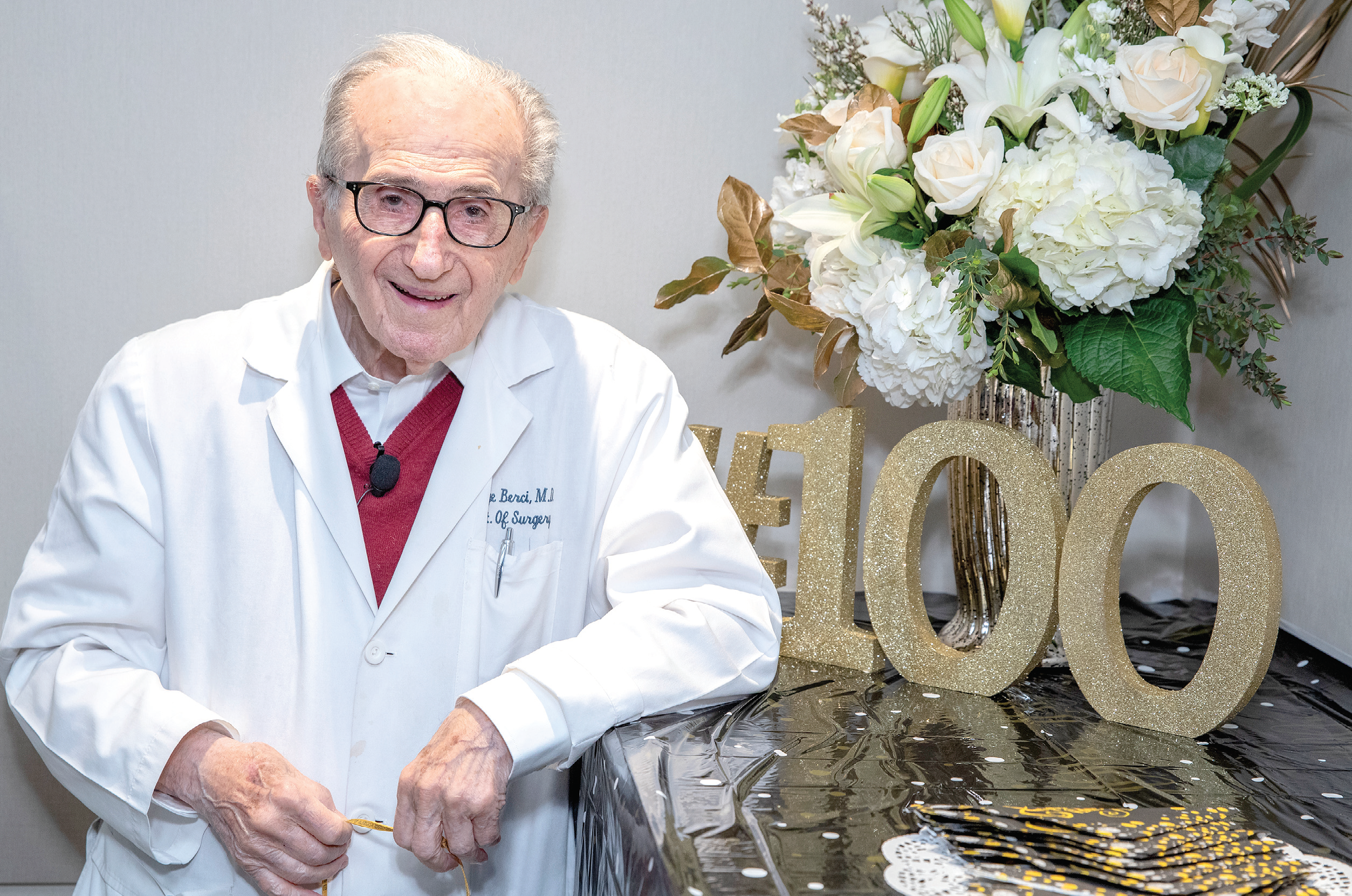 With his resume, Cedars-Sinai’s surgical pioneer Dr. George Berci could make a solid case to replace former Dos Equis pitchman Jonathan Goldsmith as the Most Interesting Man in the World.

From surviving conscripted labor for the Hungarians in 1944 during the Holocaust, to revolutionizing the field of endoscopy, to celebrating his 100th birthday in March, Berci has lived a life worthy of a Hollywood film.

“It was actually pathetic,” Berci said of his birthday and the celebration that accompanied it at Cedars this past spring. He added that he was pleased to visit with colleagues, take some videos and eat a slice of “very good” cake. “In other words, it was very nice.”

The semi-retired surgeon was born in Szeged, Hungary, on March 14, 1921. Berci grew up in both Hungary and Austria, and he experienced anti-Semitism at a young age, having been ostracized and forced to sit in the back of the classroom with other Jewish students in the 1930s. He washed cars to pay his private school tuition after Jews were banned from attending public schools.

In 1942, Berci was enlisted to serve the Hungarians under the direction of the German Army. In 1944, as a conscripted laborer, he was loaded onto a train headed to a concentration camp when it stopped near Budapest. And then the Allied bombs fell.

He earned his medical degree in Hungary in 1950 and returned to Budapest in 1953 to help create one of the first experimental surgical programs in Europe. In 1962, he developed a miniature video camera that hooked up to an endoscope and provided surgeons with larger images with which to work. 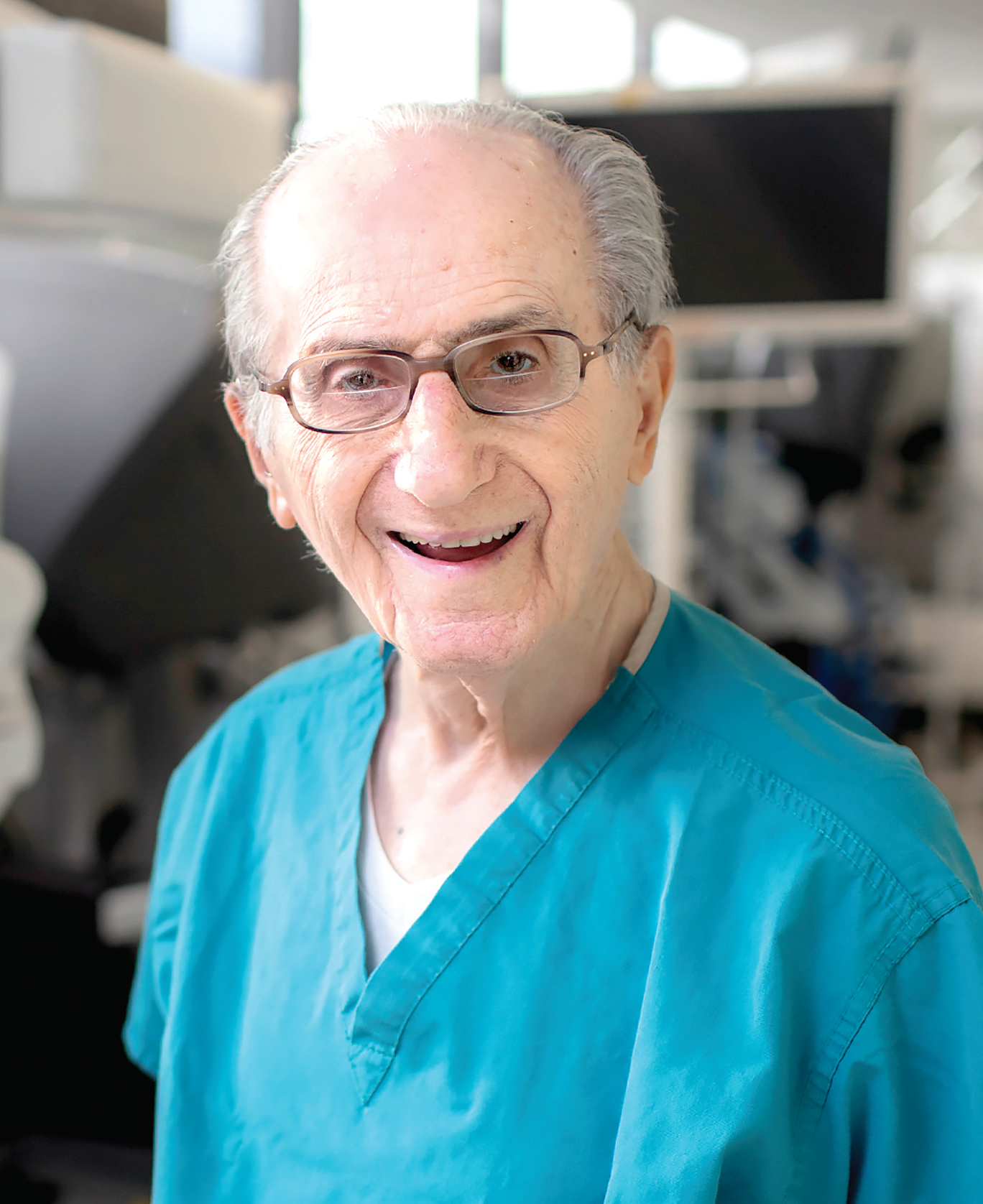 After his work was noticed by Cedars-Sinai’s founding director of surgery, Dr. Leon Morgenstern, Berci worked for the department of surgery as a visiting scholar before joining the hospital and creating the medical center’s multidisciplinary endoscopic surgical division alongside Morgenstern in 1970.

At Cedars, Berci helped create a minimally-invasive endoscopic procedure that reduced patients’ pain and recovery time. Soon after, patients began to demand that their doctors offer it, he said.

Then, Berci and his team began implementing the system in other areas of health care, such as urology and pediatrics.

“We extended this to a large number of procedures,” the centenarian said. “It was accepted, in a few years’ time, by everybody … If you’re looking around today, in every specialty, they are using our basic ideas. I’m very proud of it.”

Berci said his work at Cedars sent him around the globe – to China, Europe, South America, “you name it.”

“In other words, Cedars was a very important key factor to introduce this procedure,” he added.

Berci has been honored in numerous ways: the Jacobson Innovation Award from the American College of Surgeons, the Society of Gastrointestinal and Endoscopic Surgeons’ creation of the George Berci Lifetime Achievement Award in Endoscopic Surgery and an honorary doctorate from Semmelweis University. He was also a founding member of the International Biliary Association.

Berci has authored more than 200 scientific papers, and 12 books. He has also produced for more than 40 films.

In fact, reading, writing and teaching is most of what he does these days at the medical center. Berci, who no longer sees or operates on patients, said he’s currently only on the hook for two days a week at Cedars-Sinai, although he is technically retired.

“The tempo has decreased because you know why,” he said. “This keeps me above water. I’m reading a lot. I’m writing. In my past time, I studied music, and I like music. It’s another area where I get some satisfaction and interest.”

Berci’s sense of humor is certainly still intact. When asked how long he’d been retired, he commented, “Too long.” Would he actually retire and spend some time lounging? Berci ducked the question.

“Unfortunately, we don’t have a couch here,” he added. “It would be nice. I will recommend a chair, right? And mention that you recommended it, OK?”