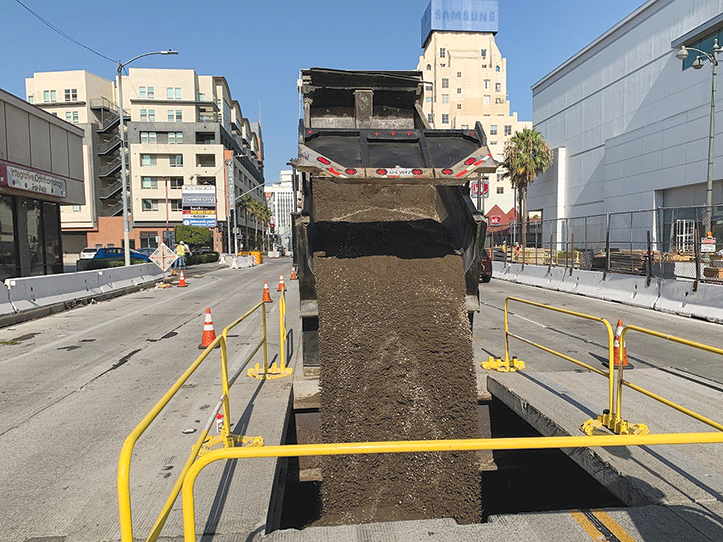 Concrete pouring and dirt infilling are ongoing in the tunnels near the future subway station at Wilshire/La Brea. (photo courtesy of Metro)

Metro is working on the Purple Line Extension subway project and advising about impacts the construction may have on the community.

In Westwood, where work is occurring on the future Westwood/VA Hospital station, construction will require full closures of the southbound San Diego (405) Freeway onramps and offramps at Wilshire Boulevard beginning on Sept. 9, at 9 p.m. The closures will generally be from 9 p.m. to 6 a.m. on most days through at least Sept. 24.

Crews will continue worksite preparation for the future Westwood/VA Hospital Station, including well monitoring, instrumentation, tree and utility relocation, and sound wall construction and heavy equipment at the site may also cause intermittent noise. The work may also affect Wilshire Boulevard. However, access will be maintained for VA residents, patients, guests and staff.

In Century City, a new partial traffic lane closure is in place on Constellation Boulevard west of Avenue of the Stars. One eastbound and one westbound lane will remain open. The closure will facilitate excavation of the future Century City/Constellation subway station and will be in place through early 2022. Access will be maintained to the Fairmont Century Plaza Hotel.

Beginning in mid-September, storm drain relocation and utility work will also occur near the future subway station in Century City.

In Beverly Hills, construction is ongoing at the future Wilshire/Rodeo subway station. Near Wilshire/La Cienega, crews are building a subway station and work is occurring in staging yards. Wilshire Boulevard will be reduced to two lanes in each direction between San Vicente and La Cienega boulevards. Left turns from Wilshire Boulevard to North Gale Drive and south Tower Drive, near one of the construction staging yards, are restricted.

Concrete and material deliveries continue to the future La Cienega station, as well as the Wilshire/Fairfax and Wilshire/La Brea subway stations. Concrete pouring and dirt backfilling continue, and appendage structures that house subway systems are being constructed. Lane closures, turn restrictions and sidewalk closures may also be necessary near the subway stations.

Metro announces changes to the bus system on Sept. 12