Southern cooking is king at Yard Bird Table and Bar 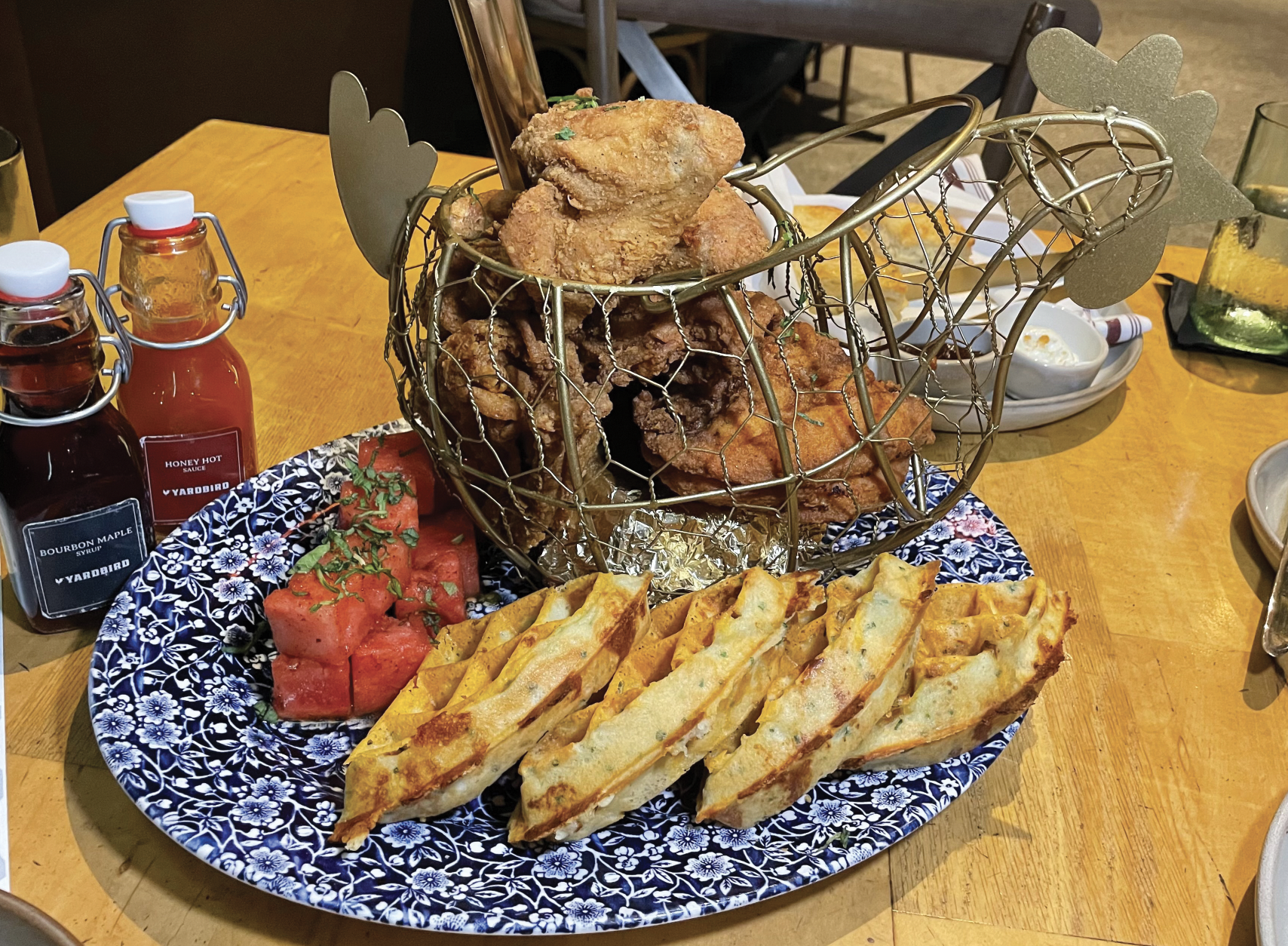 Because September is National Chicken Month, my husband and I decided to visit the newly reopened Yardbird Table and Bar at the Beverly Center.

After the restaurant opened on the corner of the Beverly Center in 2018, Angelenos enjoyed its large portions, whimsical presentations and friendly service.

Yardbird is a colloquium for a domestic chicken, and as its name suggests, the restaurant’s fried chicken is the main attraction, especially when it is served on a blue farmhouse platter and stacked high inside a wire chicken basket. The crispy, coated chicken is brined for 27 hours, dredged in Lewellyn’s secret herbs and spices, and fried to give it an appealing golden sunset color.

The large bar was hopping Friday night when we arrived just after happy hour. Behind the bar, mixologists fuse picture-worthy craft cocktails featuring fresh fruit juice, herbs, spices and spirits. The restaurant’s beverage book lists California beers on draft, and homeland, new-world and old-world wines by the glass and bottle. It also offers an exceptional spirits collection with well-known favorites and hard-to-find classics.

Almost every table on the dining patio held a plate of deviled eggs, so we ordered one too. Four white halves of hardboiled eggs are crowned with two-inch high swirls of bright yellow yolk. The creamy, yellow goodness is mixed with dill and chives, and topped with smoked roe that offers a burst of saltiness.

The next dish to arrive was the fried green tomato BLT. It’s a southern twist on a sandwich favorite, excluding the bread. Thick slices of fried green tomatoes are dredged in a flour mixture and fried, before being topped with grilled house-smoked pork belly, frisee lettuce with a lemon vinaigrette, and tomato jam. This fork and knife appetizer was surprisingly delicious.

When Assistant Central Manager Malik Muhammad brought the main course, a whole chicken platter, out from the kitchen, he paraded it through the dining room to our outdoor table. You’d think he was ushering a celebrity to the terrace by the attention the platter received. It reminded me of one of nearby Barton G’s show-stopping appetizers and entrees.

This one-of-a-kind chicken is served with a honey hot sauce that induces a slight tongue tingle. On the platter, there was also juicy cubes of spiced watermelon with a hint of citrus and paprika, and four savory Swiss and sharp cheddar cheese waffles. A bottle of house-made bourbon maple syrup oozes over the waffles. The bourbon isn’t cooked down, so a nice hint of alcohol complements the waffles.

Another showstopper is the ribs, which arrive under a smoke-swirling glass dome. As the glass is lifted, hickory wood smoke wafts toward you, enticing your senses. When the smoke dissipates, eight pieces of sweet-tea brined and braised ribs are stacked like a game of Jenga. With one bite, the tender, sweet and flavorful meat comes right off the bone.

Be sure to order the country buttermilk biscuits that are baked every hour. A plate of four crisp-top with a fluffy center biscuits arrive nestled under a napkin to keep them warm. They are served with creamy honey butter and exquisite apple butter jam that melts when spread.

Aside from poultry, I understand the shrimp and grits is quite good. Chefs also prepare a lobster mac and cheese, grilled creole-style salmon with a basil pesto and a new agnolotti with shaved truffles. Another truffle-enhanced entree is the Rosewood Ranch America Wagyu served with harissa butter and fresh black truffle.

When we finished dinner, our server delivered new plates, a large spoon and napkins. When I inquired why the new napkins, she said “Just you wait, your spectacular dessert is on its way.”

Within minutes, a thick wood tray holding a silver baking skillet arrived. On top was a boysenberry-colored solid sugar glass tuile dome. For the interactive finale, our server cracked open the hard shell to reveal a baked-to-order strawberry-peach cobbler. On top of the crumble was two scoops of unmelted vanilla ice cream. How they keep the ice cream from melting is a mystery to me.

This dessert is toothsome, and unless you’re sharing it around the table, you will need to get a to-go box.

Other eye-opening desserts include the four-layer Bourbon chocolate cake frosted with Nutella and crowned with candied bacon. The restaurant also makes a State Fair favorite: battered, deep-fried Oreos that are guaranteed to offer a sugar rush.