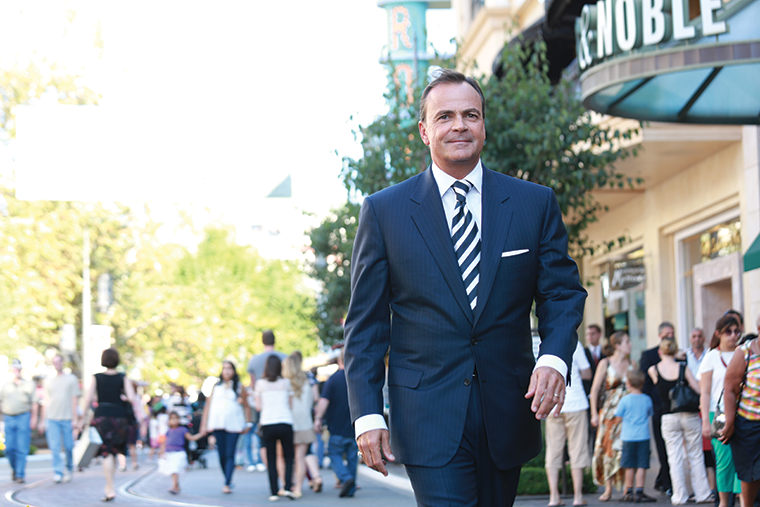 When The Grove opened in 2002, it immediately became an iconic L.A. landmark for Angelenos and tourists alike. The idea behind The Grove was to create a place of community, and the man behind this vision was founder and CEO Rick Caruso. As with all of his properties, Caruso meticulously plans every element, offering a personal touch.

Caruso has used that ideology to transform the retail shopping experience, replacing enclosed, cold and uninviting megamalls with open-air marketplaces bustling with activity. Caruso propelled the shopping experience to new levels, offering upscale retail and dining together in spaces that are also part amusement park, part town square – rolled into one.

“Our properties are designed for an experience,” Caruso said. “It’s a place where you can spend time with family and friends and relax and enjoy life in the way that it should be enjoyed. It’s much bigger than visiting a shopping mall. It’s creating a sense of community.”

When The Grove opened along Third Street next to the Original Farmers Market, it forever changed the local landscape, attracting crowds from the beginning. Visitors can walk along cobblestone streets or hop on the trolley – built on the undercarriage of an authentic 1950s Boston streetcar – and take a spin around the fountains which perform to music. Watch an epic movie, find the ideal gift or enjoy some Blue Ribbon sushi, while possibly catching a glimpse of a celeb.

One of many signature Caruso properties located in the Los Angeles area, The Grove joins The Americana at Brand in Glendale, The Commons at Calabasas, Palisades Village and the Promenade at Westlake. Further catering to those who enjoy the finer things in life, the Caruso portfolio includes the Rosewood Miramar Beach Resort in Montecito, a luxurious seaside getaway.

Caruso said he is proud of how his properties transform communities, and The Grove is a prime example. The property has been a catalyst in Los Angeles, bringing a “bolt of energy” that made the entire neighborhood more desirable, he said.

“It brought new energy into the area. It completely changed the neighborhood,” Caruso added. “Twenty years ago, it was a little forgotten. [The Grove] infused new life. It’s an amazing neighborhood, with Hancock Park, Beverly Hills, Mid-City and West Hollywood. It’s a great neighborhood and always has been. We are very proud to be part of the community.”

Feeling so strongly about the neighborhood, Caruso selected the site of the former Loehmann’s department store at 333 La Cienega Blvd. for a housing, restaurant and market space development. It is among a “pipeline of projects” planned over the next seven to eight years, Caruso said.

The real estate developer added that he is proud to have built his business from the ground up in the city where he was born and raised. Caruso credits his grandparents, who he described as Italian immigrants who started with very little, for teaching him the value of hard work and the importance of every detail. He credited them for instilling a desire for philanthropy and giving to others, which he said has been a hallmark of his life. The Caruso Family Foundation has provided millions of dollars in support for organizations like Operation Progress in Watts, Para Los Niños, Children’s Hospital Los Angeles, and the Jewish Federation of Greater Los Angeles, among others. 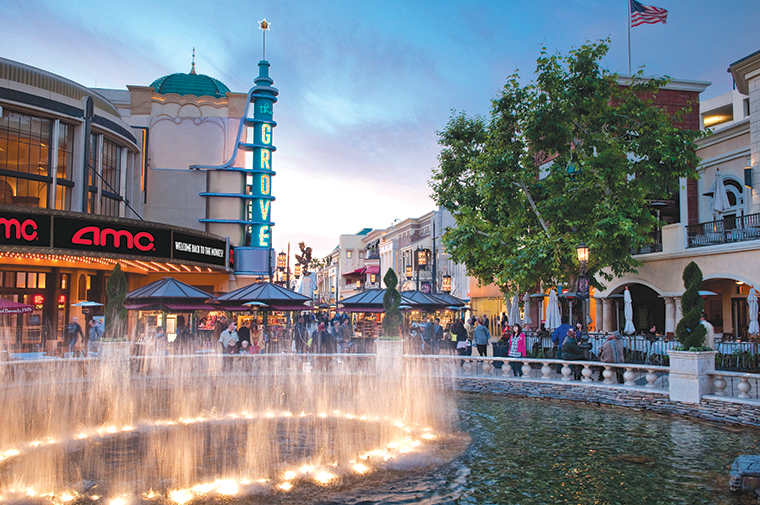 The Grove remains Caruso’s premier shopping destination in Los Angeles. He has expanded
his portfolio to include the luxury Rosewood Miramar Beach Resort in Montecito. (photos courtesy of Caruso)

A graduate of the University of Southern California and the Pepperdine School of Law, Caruso has made significant contributions to his alma maters. Additionally, he serves as chairman of Loyola High School’s board of directors. With his wife, Tina, he contributed $5 million for the campus’ landmark Caruso Hall.

Caruso has long been mindful of civic duties and has served the city of Los Angeles in several capacities. He was appointed by Mayor Tom Bradley as a Los Angeles Department of Water and Power commissioner, previously served as president of the Los Angeles Police Commission and is a board member for USC, Pepperdine University, the Irvine Company, St. John’s Hospital and the Ronald Reagan Presidential Library Foundation. His next move may be to throw his hat in the ring for mayor of Los Angeles in the 2022 election.

“It’s something I’m strongly considering,” Caruso said. “I have been asked by a lot of people to consider it, and I am looking into it and studying it. It’s certainly a direction I am considering.”

Whatever the future may hold, Caruso said he will remain focused on bettering the city he credits for giving him so much. He is dedicated to continually improving his properties and bringing innovative new experiences to visitors.

“The business we are in is creating joy and enrichment in people’s lives. It’s a respite for people, and that’s why they come back over and over again,” Caruso said. “I have a great love of Los Angeles. I want to let [everyone] know that I’m grateful to them for being great, great supporters of our properties.”