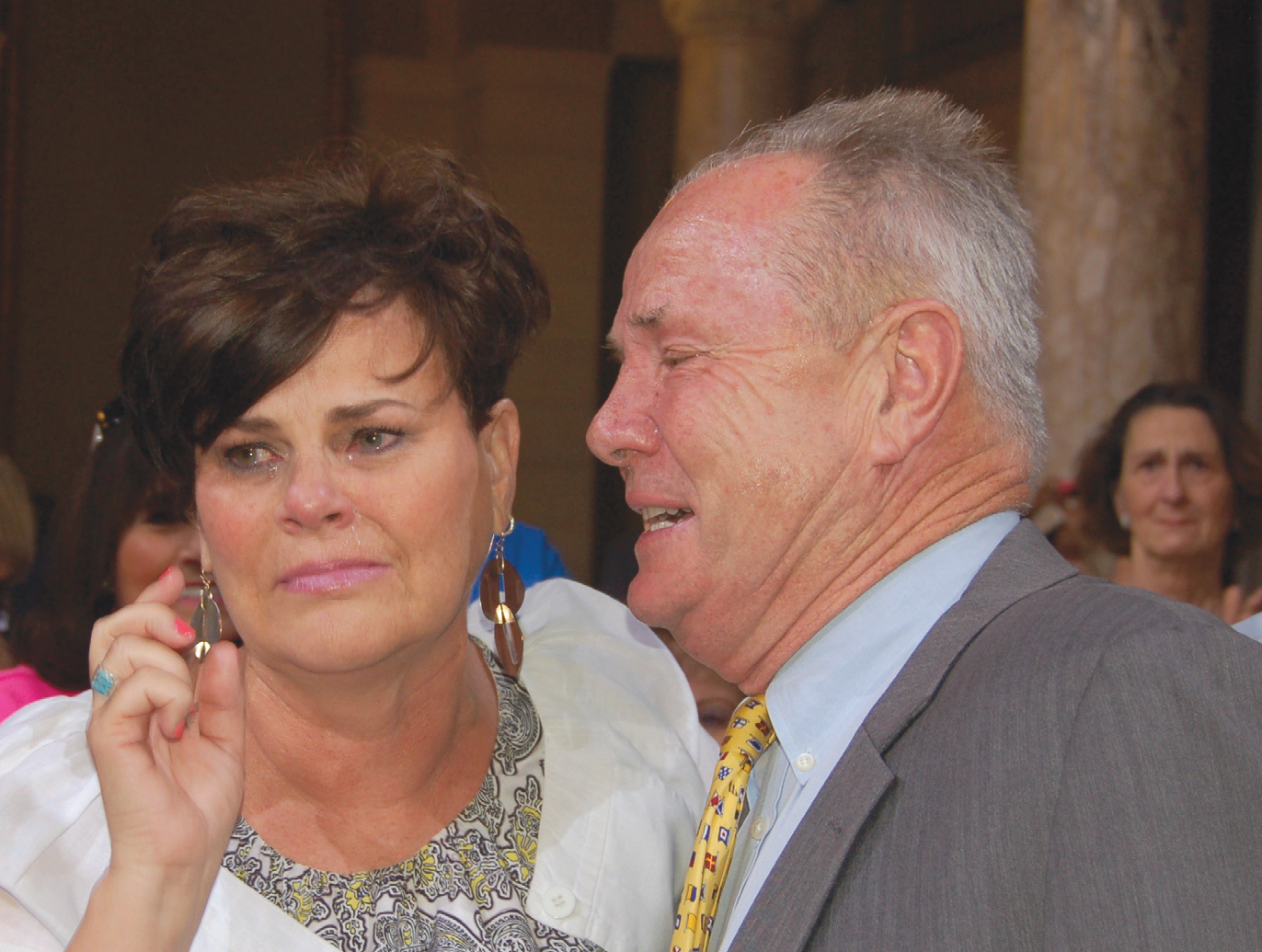 Tom and Brigid LaBonge share bittersweet tears on his last day in Los Angeles City Hall as a councilman.

Los Angeles lost one of its biggest cheerleaders on Jan. 7, 2021, when former Los Angeles City Councilman Tom LaBonge died at the age of 67 at his home in Silver Lake.

Frequently referred to as “Mr. Los Ange­les” due to his tireless enthusiasm for the city, LaBonge was a larger-than-life presence at City Hall and throughout his beloved 4th District.

Deciding public service was his calling, LaBonge landed a job as a field deputy for former Los Angeles City Councilwoman Peggy Stevenson, and he was appointed as an aide to City Council President John Ferraro, who represented the 4th District from 1966-2001. LaBonge was tapped as Ferraro’s protege, and he was elected to succeed the venerable council president after Ferraro’s death in 2001. LaBonge represented the Los Angeles City Council’s 4th District from 2001-15 – a dream job for the Los Angeles native, his wife Brigid, said.

Throughout his tenure, LaBonge remained focused on constituent needs, often driving the district and looking for trees that needed trimming or debris that needed to be cleaned up. When he saw an area that needed attention, LaBonge rolled up his sleeves and went to work – something he believed was integral to public service. He regularly met with residents and community members, forging many close relationships over the years. 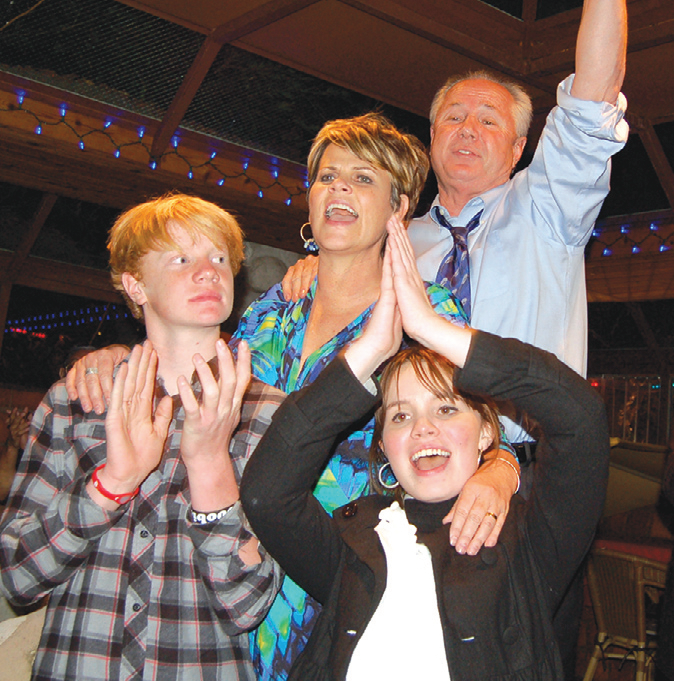 LaBonge celebrated his L.A. City Council re-election with his family in 2011.

“What makes the 4th District special is the neighborhoods and the people. Larchmont, Hancock Park, the Miracle Mile, they are all so special,” LaBonge said in a 2016 interview with the Beverly Press and Park Labrea News. “It was a true pleasure to serve on the City Council, and I am proud of the things I was able to accomplish.”

LaBonge cited his work to move the Purple Line forward as one of his biggest accomplishments. He said in 2016 that former Los Angeles County Supervisor Zev Yaroslavsky, former Congressman Henry Waxman and then-State Assemblyman Mike Feuer made the subway project possible by authoring legislation that allowed Metro to move ahead. LaBonge said his work on the Metro Board of Directors paved the way for the initial studies that determined it was safe to tunnel under Wilshire Boulevard.

“The subway will change the area dramatically in a positive way,” LaBonge said in the 2016 interview. “Exciting times are corning for the Miracle Mile.”

That positivity was a hallmark of LaBonge’s character, a trait exemplified in everything he did. With a vivacious personality, the affable councilman shared his love for Los Angeles with everyone he met. They are all “angels in the City of Angels,” he often said. LaBonge randomly approached people and engaged them in conversation, or shouted “hello” to people he recognized as they passed by.

He began nearly every morning hiking in Griffith Park to see the sunrise. One of his proudest accomplishments was establishing a public-private partnership that purchased land around Cahuenga Peak in the Hollywood Hills so it could be donated in 2010 to expand Griffith Park. After LaBonge’s death, Mayor Eric Garcetti renamed Mount Hollywood as Tom LaBonge Summit, forever memorializing the city leader who showed so much love and enthusiasm for Griffith Park.

“Tom held such genuine affection for everyone he met and served, and he loved the beauty, diversity and dynamism of Los Angeles,” Garcetti said in January when renaming the peak. “There’s no better way to remember, honor and cherish him than to forever attach his name to his beloved Griffith Park, our crown jewel.”

LaBonge stayed focused on his family – Brigid and children Mary-Cate and Charles. They were by his side on his last day in City Council chambers on June 30, 2015, for a tearful goodbye that included praise from public officials and colleagues. 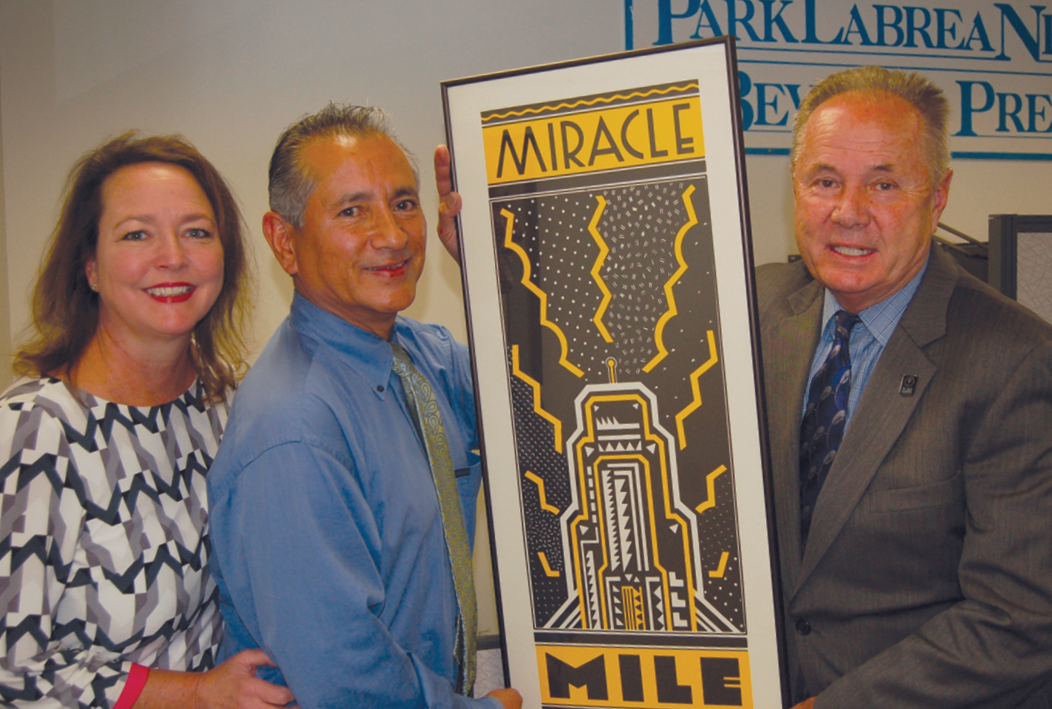 Tom LaBonge presented the publishers with a “Miracle Mile” poster from his District 4 office. On the back, he inscribed “Michael and Karen, you are the Miracle Mile! Love Tom LaBonge 2001-2015.” (photo by Edwin Folven)

Recently, they gathered with family and friends on March 12 at Pink’s Hot Dogs – another Los Angeles landmark that LaBonge loved – to celebrate his life and a new hot dog named the Tom LaBonge Dog.

“[It] would have been one of his top honors,” his wife Brigid said at the celebration. “Basically, [Pink’s] was one of his second homes. For our family, [it] is really special.”

At a special tribute to LaBonge in City Council chambers after his death, Brigid recounted how much the city of Los Angeles meant to him, and how much her husband meant to others. It was then that she realized the city loved LaBonge as much as he loved Los Angeles.

“He never told us what he did, and [now] I am finding out where he was the whole time,” Brigid said. “[He] was this guy with this giant, giant heart.”

Brigid is grateful for the support from people throughout the city who still contact her regularly to wish the family well.

“We are still gobsmacked about the outpouring of love from all over the city and really all over the world,” Brigid said. “He had a genuine love for the city and the people who live there. All of these things help keep him alive for us.”

Nothing like a coffee, a donut and a paper at Third and Fairfax