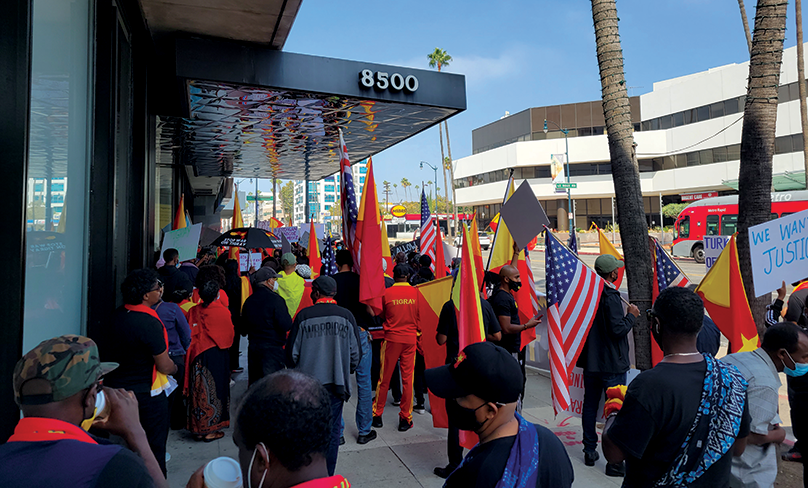 Approximately 100 people demonstrated outside the Consulate General of Turkey on Sept. 8. (photo by Brynn Mechem)

Chants of “Drop food, not bombs” could be heard as approximately 100 people gathered on Sept. 8 near the intersection of La Cienega and Wilshire boulevards to protest deaths in Tigray, the northernmost region of Ethiopia.

On Nov. 4, 2020, Ethiopian Prime Minister Abiy Ahmed ordered a military offensive against regional forces in Tigray. Since then, an estimated 70,000 civilians have been killed in what many protestors say is a genocidal war. However, the Ethiopian government rejects reports of genocide.

Many civilians were also killed in the conflict from aerial bombardment by Turkish drones, which is why protestors gathered outside the Consulate General of Turkey at 6300 Wilshire Blvd., said organizer Senai Gebrekristos.

Gebrekristos is part of the Tigrayan Community of Greater Los Angeles, which has regularly held protests throughout Los Angeles since the war in Tigray began.

“Our big goal is to, first, end this genocidal war,” he said. “But second, we want to provide aid to the thousands of people dying from starvation.”

The U.S. Agency for International Development estimates that approximately 900,000 people across Tigray, an area of approximately 6 million people, currently face famine conditions. However, active fighting and restrictions keep aid workers from reaching all parts of the region, making it difficult to receive official reports, according to media reports.

Opponents of the war said cattle have been killed and crops have been burned. However, Ethiopia’s government has said aid is being delivered to nearly 1.5 million people, according to media reports.

“We need to make sure attention is drawn to this issue so there is no added belligerence,” Gebrekristos said. “People are dying, and it needs to stop.”