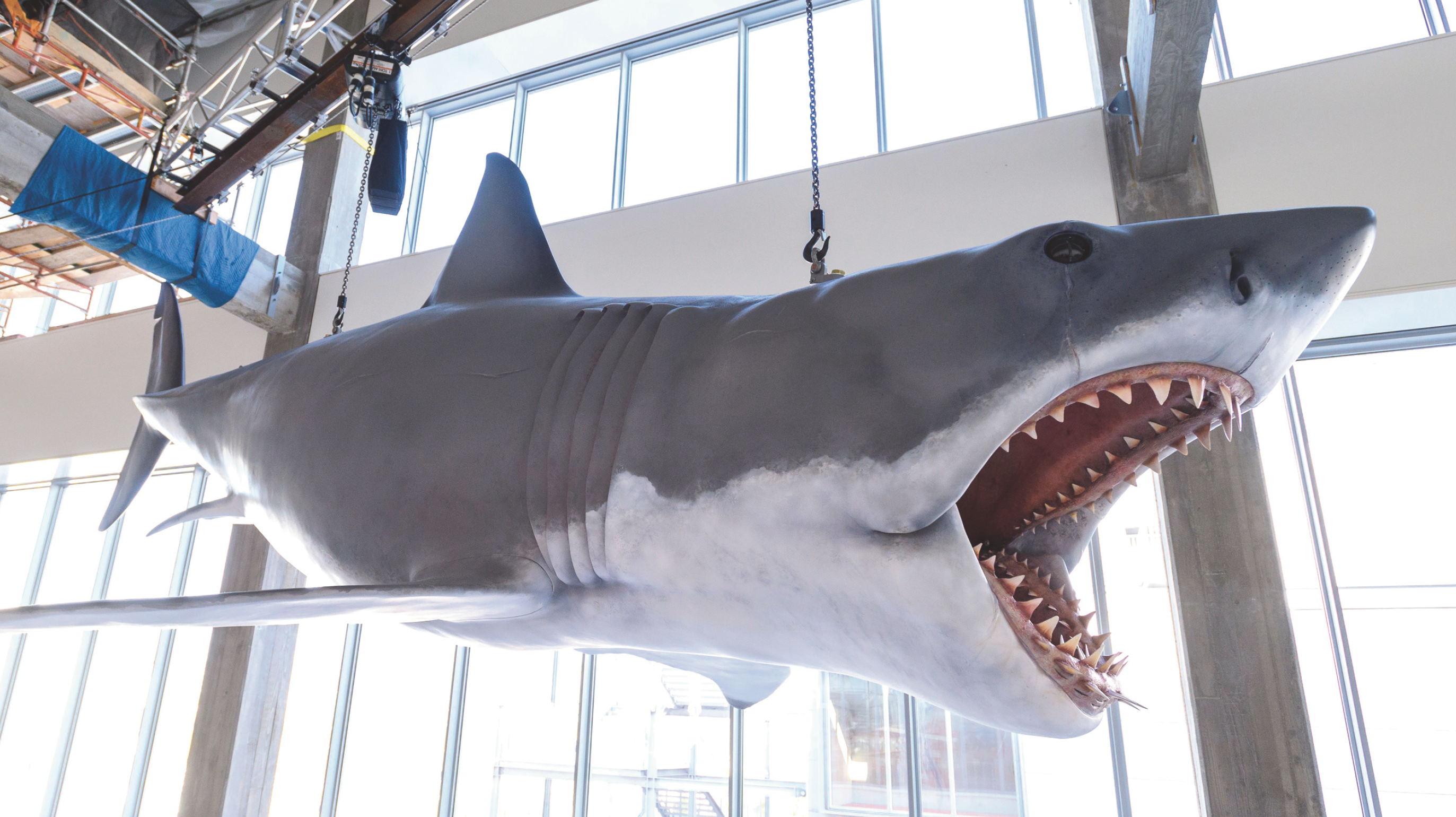 “Bruce the Shark” installation at the Academy Museum of Motion Pictures in Los Angeles. (photo by Todd Wawrychuk/Academy Museum Foundation)

At an imperfect moment in the 1980s, one film inspired and slayed me in equal measure: Wolfgang Petersen’s “The NeverEnding Story,” adapted from Michael Ende’s novel. I could talk forever about the many sequences that work so well, but as a child, the most lingering occurred in the Swamp of Sadness, when young Atreyu loses Artax, pleading with his horse to resist despair lest being drawn into the black mud below. Powerful, yes. Traumatic, certainly. And definitely unforgettable.

So what’s your favorite film scene? Not necessarily the whole film. Rocky’s motivational run, George Bailey’s angelic friend earning his wings, “The Godfather’s” baptism scene, Indiana Jones’ quickest take down of a foe or the shower scene in “Psycho.” How about Dottie catching a fastball barehanded or Darth Vader declaring, “I am your father.”

Frankly, I can’t pick just one (how can I possibly choose between “Goonies never say die” and “Pulp Fiction’s” dance scene), so I’ve decided to include 75 moments from 75 years, commemorating all the movies that impacted us. Some you’ll know without need for the name; others, perhaps, are more obscure, embarking on all the various emotions of a perfect moment. Try to see how many you can name.

To start, let’s consider the power of melodrama, a particularly disarming tactic. During Col. Jessup’s heated cross ex-amination, he declares, “You can’t handle the truth,” before admitting complicity in a soldier’s hazing. Here, the colonel abuses his power, deeming his actions necessary, despite collateral damage, to ensure soldiers stay sharp and ready to serve.

That’s a different approach than “The Dark Knight,” that heroic final monologue by Commissioner Gordon educating his son on the complexities of heroism, justifying a big lie to the public to preserve the peace. But melodrama – the score, pacing, intensity of line delivery – co-opt our reasoning, forcing the film’s will upon us.

Then consider iconic filmmakers mastery of the camera itself.

A rather compelling weapon of the oldest audiovisual medium: something technically incredible. From “Lawrence of Arabia’s” first landscape shot and an astronaut jogging without concern for gravity in “2001: A Space Odyssey” to an amazing long take in “Children of Men,” the masters employ the camera with untouched mastery.

Practical effects like the monster’s design in “Predator” or the fiery tire tracks passing Marty and Doc as that DeLorean reaches 88 miles per hour just in time. A room spinning while Arthur fights subconscious projections amidst a dream heist. The T-1000 emerging from fire in shiny metallic form. A mind-bending half rotation shot when Trinity attacks the police before any Agent Smiths take over their minds in the “Matrix,” invoking the strategy of placing several cameras next to each other to mimic sequential motion used by Eadweard Muybridge more than a century earlier.

Getting to this point wasn’t always easy. Bruce the shark, hanging out at the Academy Museum, endured a sea of mechanical failures prompting a tell-don’t­show approach eventually leading to his face to face with Brody during some chumming. And the showdown between Jet Li’s Nameless and Donny Yen’s Long Sky in 2002 ‘s “Hero” is a tribute to decades of expert rope work during mar­tial arts fight sequences. 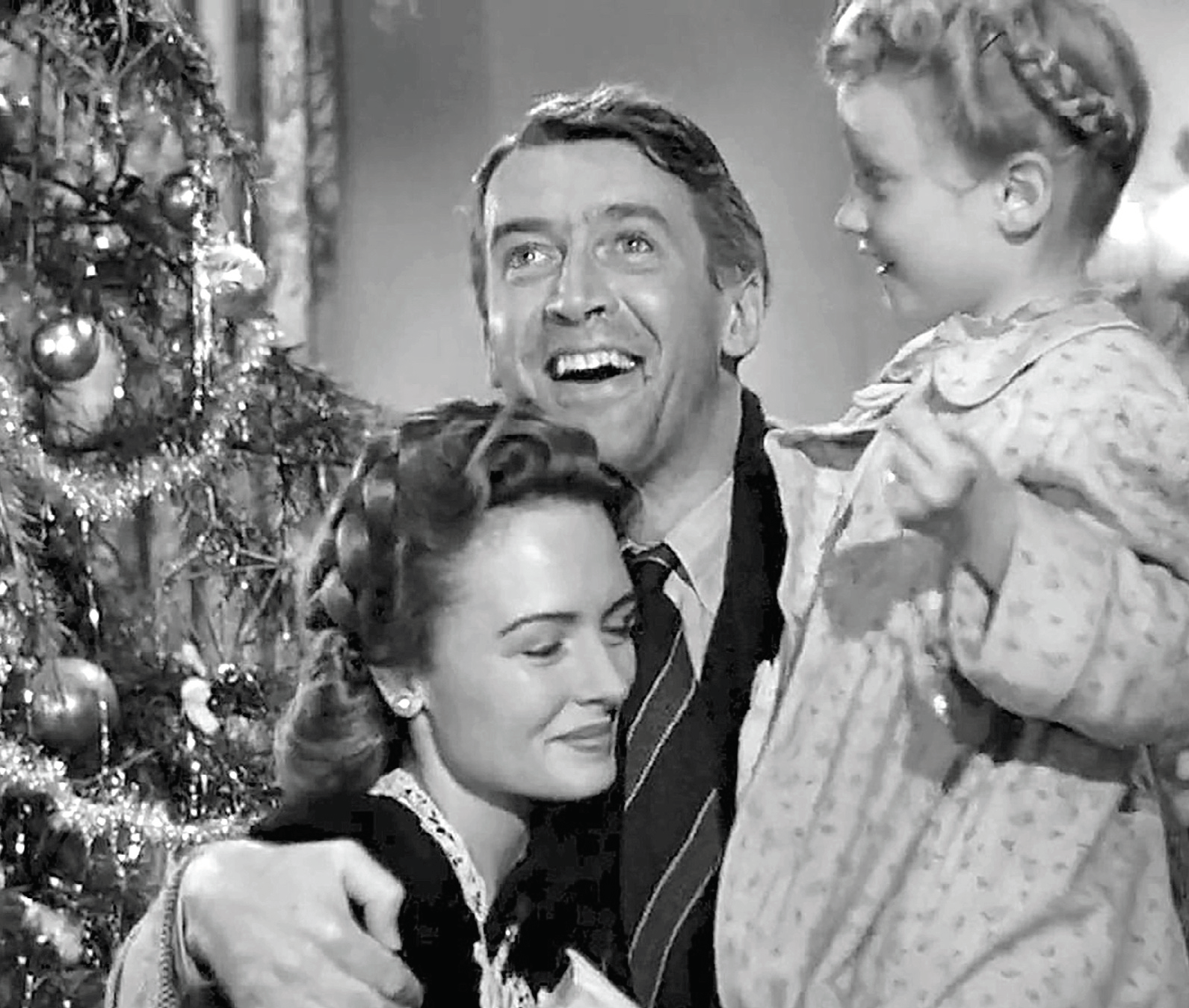 But a perfect moment need not be grand battles nor special effects. Dramatic moments sometimes merely require the right actor with the right direction. Robert De Niro ‘s work on “Taxi Driver” might’ve provided one of the most classic lines in film history, but “You talkin’ to me” – still an amazing moment – doesn’t compare to his Travis Bickle holding a hand to his head and making a gunshot sound three times.

Great monologues appear across genres, from “Blade Runner’s” Roy Batty reflecting on his short life as a replicant “lost in time, like tears in rain” to Jonathan Majors’ one-man show as Mont in “The Last Black Man in San Francisco.”

Perfection need not be pleasant. For its joys, “The Sound of Music” drips with tragedy peaking when Lies!’s friend Rolfe betrays the von Trapp family. Remember John McClane running on glass? How about 1979’s “Bush Mama,” from the L.A. Rebellion film movement? Those final moments, filled with violence and rage are a haunting way to end a story.

Let’s not forget that horror does this all quite well. The perfect jolt from an eyeball staring through a door in “Black Christmas,” Dr. Hannibal Lecter explaining what pairs well “with some fava beans and a nice Chianti,” “Midsommar’s” final girl sporting a terrifying smile, “Get Out’s” sunken place or the Pale Man trying to eat Ofelia during a fantastical quest in “Pan’s Labyrinth.” Then there’s the more victorious moments, exemplified by the pump of a shotgun ending “A Quiet Place” to a priest’s great sacrifice to save a little girl in “The Exorcist.”

I wouldn’t call it horror, but when L.B. Jefferies locks eyes with the killer in “Rear Window,” the effect is quite paralyzing. It gets me almost as much as a few shrieking eels circling Princess Buttercup.

All those thrills over the years keep us going, sending shivers down our spines. Thank Steven Spielberg, David Fincher and John Carpenter for those T-Rex attacks, concerns for “what’s in the box” and ambiguous endings following a hell of a time trying to prevent an alien from escaping the Antarctic.

Or how about the wacky moments. Sometimes they evoke a laugh, like all that blood flooding poor Ash during his fight against the evil dead. Other times, they are just to embrace madness, like a Mad Max foe attached affront a muscle car strumming a guitar belching flames.

And things can even get weird for more profound, albeit ambitious reasons, like frogs raining down on the San Fernando Valley in 1999’s “Magnolia.”

Perhaps none of those insane moments compare to the iconic hallucination sequence during the climax of “Easy Rider,” written by co-star Dennis Hopper. Scholars still discuss what it means, but full understanding of it doesn’t mean they can’t just enjoy the, well, ride.

Even the splendor of animation affords moments that last forever. A couple dogs chewed on the same spaghetti noodle, winding up lip locked. Spider-Man flew into a massive “Spider-Verse” in the most colorful final showdown to date. Raya’s awesome sword to aid her quest to find the last dragon. And Simba took his place as king to a Hans Zimmer score unparalleled in grandiose purpose.

But animation isn’t always geared toward the kiddos. “Princess Mononoke” presents a more mature story, especially when Ashitaka saves the title character while a demonic curse flairs up. Director Hayao Miyazaki, whose career will be chronicled in an Academy Museum exhibit, dances between such stories and those targeted to more innocent viewers as well, to my children’s great delight.

Oh comedy, the oft-snubbed genre. Sally proving women can fake it, the hilarious final line in “Some Like It Hot” – you might enjoy the year-round Monroe exhibit at the Hollywood Museum – and Danny Kaye as a court jester hypnotized to fight with a single snap of the fingers, only to come-to every time anyone snaps. And don’t ever forget Barbra Streisand’s Fanny Brice playing a beautiful bride on stage, executing a last-minute costume change that alters the romantic tone of a major number.

Musicals in particular hold a special place for me. The grand scene changes in “Singin’ in the Rain” would eventually set the stage for “Moulin Rouge’s” beautifully produced “Elephant Song,” compiling a slew of love song greats in an epic medley. And “White Christmas” has one of the most moving moments when the 151st Division marches into the Columbia Inn to honor General Waverly. Such moments are designed to make us bask in awe. 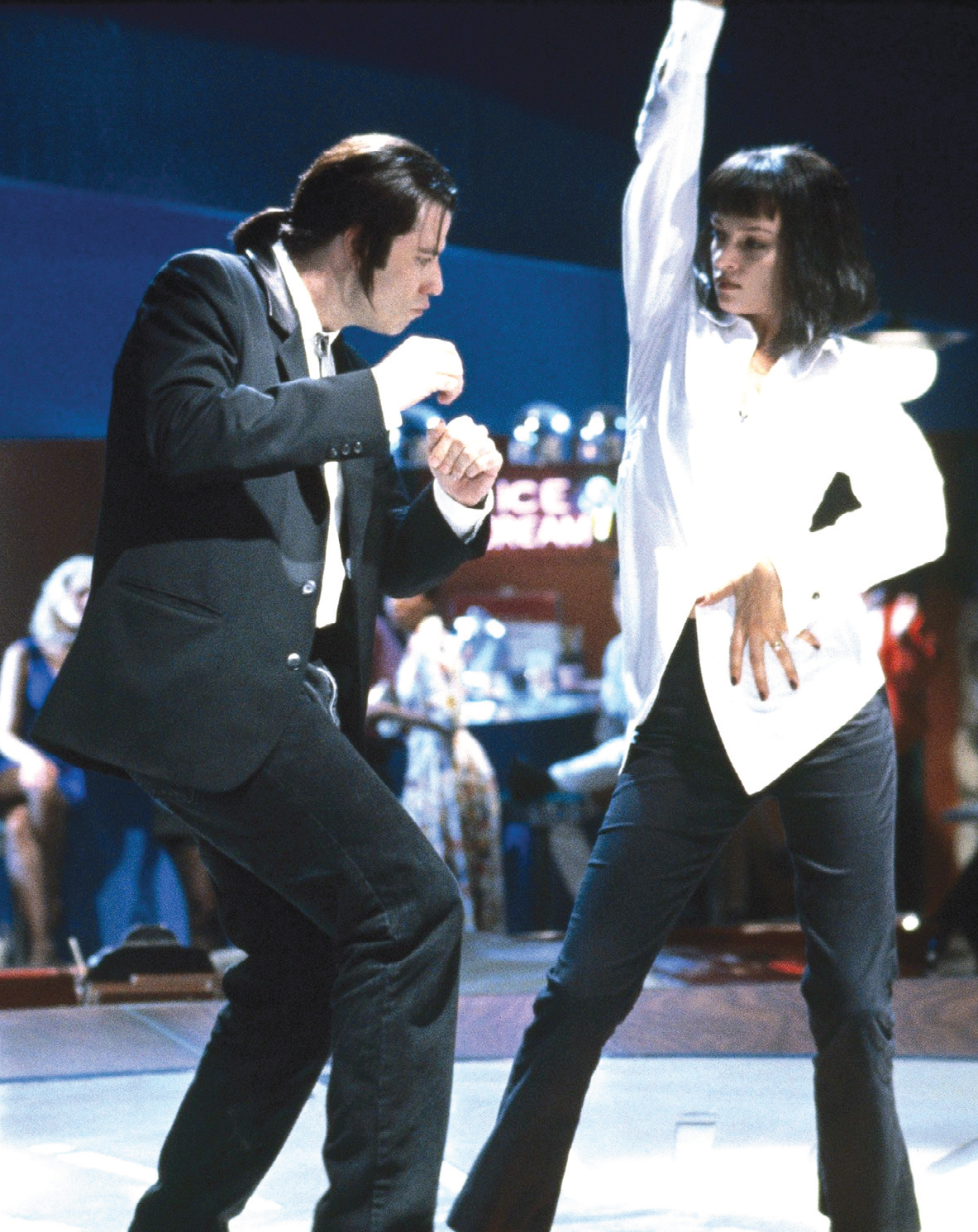 I can’t deny my love for the softballs either, the moments designed to make us cheer: Klaatu’s warning to Earth, all the students standing on their desk to send off Mr. Keating and E.T. lifting kids on bikes off the ground. When Gandalf arrives with the Riders of Rohan, I’m nearly crying every time.

Before that, Ripley rocking a power loader to take down the queen xenomorph set the tone for my childhood. Fast forward to a couple years ago, Captain America seemed ready to accept his

fate, but all the missing Avengers and their many, many allies arrive to take down Thanos – well … there’s a very popular reaction video of that moment that says all I have to say on this one.

Finally, endings. Bask in all the amazing ways a story identifies that perfect moment to wrap it all up. “Vertigo” shirks such expectations, while “Twelve Angry Men” balances tragedy and victory. “The French Connection” embraces death at the cost of justice, while “The Sixth Sense” tells us the protagonist was dead the whole time.

Still others get weird. “Apocalypse Now” gives Marlon Brando’s Col. Kurtz a haunting monologue, while “Annihilation” challenges the entire notion of what it means to be alive.

The perfect moment is not bound to one kind of film. It’s beautiful and poetic, haunting and morbid. A tree saying, “We are Groot,” can mean so much in the proper context, as can a few lines of a melody, especially when they’re the ultimate form of communication with UFOs. A child enjoying the beach with a father in “Moonlight” can be as emotional as the dying words of a Force-sensitive rebel in “Rogue One.” And the perfect moment can even surface from the depth of the best worst film ever with only three words: “Oh, hi Mark.” (Hopefully, it’ll return on a random midnight at a nearby Laemmle soon.)

Whether by accident or through exhaustive preparation, these sequences from the past 75 years will endure for more decades to come. I’m thrilled to uncover as many of the next great 75 moments as I can. Across styles, genres and techniques, film ignites my curiosity in ways other media never will, and I’m eternally thankful for all the filmmakers and moviegoers who cherish every frame as much as me.