Office building aims to be shining star on Sunset 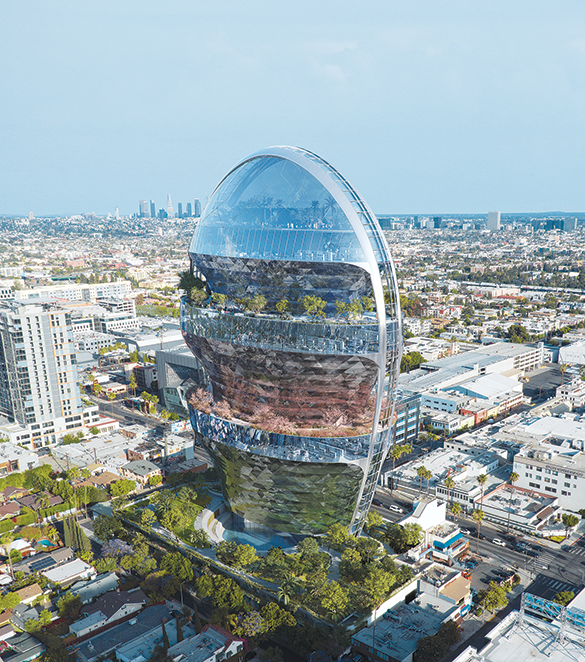 The Star office building will include landscaped terraces and a terrarium-like rooftop dome. (rendering courtesy of MAD Architects)

A new office building named The Star has been proposed at 6061-6087 Sunset Blvd. and 6056-6090 Harold Way in a section of Hollywood that has become home to multiple new developments during the past decade.

Proposed by developer The Star LLC and designed by the Chinese architecture firm MAD Architects, the $500 million, 22-story building would include 500,000 square feet of creative office space.

Edgar Khalatian, a representative for The Star LLC, which purchased the properties in 2017, said the new building will include terraced greenspaces and a terrarium-like rooftop dome with a restaurant. A funicular cable car will transport people between the base and the rooftop via the building’s exterior.

The Star would be located in the same neighborhood as other new buildings and complexes including Sunset Gower Studios, Sunset Bronson Studios, Columbia Square and the Emerson College Los Angeles Center. Ma Yansong, of MAD Architects, said the new building was designed with other Hollywood landmarks in mind.

“Inspired by the curvilinear forms of the Griffith Observatory, Capitol Records Building, Hollywood Bowl and the Cinerama Dome, [the building] asserts a new typology for the office of the future,” Yansong said. “Hollywood has long been a signature center for culture and creativity. The Star will be a new iconic landmark in Hollywood and continue to nurture the public’s inspiration and creativity.”

MAD Architects also designed the new Lucas Museum of Narrative Art, which is under construction in Exposition Park. Plans for The Star were filed with the city on Sept. 16, and the project will go through an extensive review and planning process requiring zoning changes and a general plan amendment.

“It is encouraging that, even during these challenging times, Hollywood continues to attract investment,” said Councilman Mitch O’Farrell, 13th District. “I look forward to learning more about the impacts of this proposed project as it moves through the Department of City Planning’s processes.”

Some residents in the surrounding neighborhood questioned the need for a new office building in an area where many other buildings have recently been constructed.