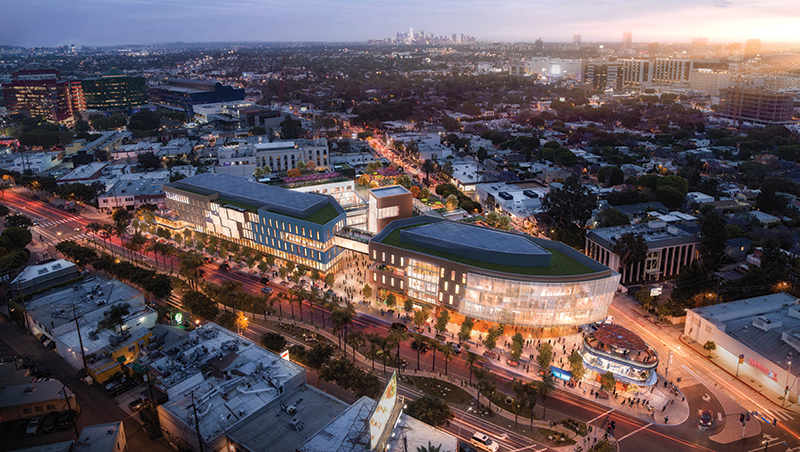 The latest version of a plan to develop the Melrose Triangle project would add pedestrian walkways and be centered around a courtyard. (rendering courtesy of Gensler)

For almost 10 years, developers have sought to revitalize West Hollywood’s western gateway by creating the Melrose Triangle, a mixed-use project planned on 2.7 acres.

Developer Systems LLC, which is associated with the Charles Company, applied for an amendment to the project, which was previously entitled in 2014.

If approved, the amendment, which was presented at a design review subcommittee meeting on Aug. 26, would add more pedestrian access and allow the project to increase by about 48,000 square feet.

“A lot has changed since this project was planned over 10 years ago,” said Andy Cohen, co-CEO of architect firm Gensler, which designed the project. “But this new iteration significantly activates the pedestrian experience. We are hoping that it will become a great public gathering place.”

The overall size of the project will not significantly change because the new accommodations will be made below ground level. However, the project density has increased.

The number of dwelling units will increase from 76 to 77, with an average size of 630 square feet. Twenty-four units will be for low-income households.

“The original project included a space for the arts, and now it’s focused on retail and office space,” Lombardi said. “Is there a way to get more community engagement?”

The design still features three main buildings to create a village feel, Cohen said. Developers plan to add a centralized courtyard with a parklet and al fresco dining, a move they hope will create a respite for the public.

Despite the changes, some members of the public still have concerns. West Hollywood resident Richard Giesbret said the proposed design does not relate to other buildings in the area, which could interfere with the long-term success of the project.

“The building can’t just stand alone,” Giesbret said. “It has to relate to the blocks opposite and the rest of the Melrose area. Otherwise, it will just be a big white elephant at the end of our gateway.”

The biggest change comes in the amount of pedestrian access offered at the site. Original iterations of the development included one walking path connecting Santa Monica Boulevard to Melrose Avenue.

The amendment shows that a driveway planned off Santa Monica Boulevard will be removed to allow pedestrian access to the courtyard. Additionally, an entryway will be added along Almont Drive, and a walking path will be included between a retail building and coffee shop at the corner of Melrose Avenue and Santa Monica Boulevard.

Instead of driving through the middle of the complex to park, all commercial vehicles will access parking off Melrose Avenue, and residential access will be off Almont Drive.

Design review subcommittee Chair Lynn Hoopingarner said the pedestrian walkway connecting Melrose Avenue and Santa Monica Boulevard is too small and doesn’t include storefronts, which may not encourage pedestrians to walk through it.

“A lot of these pedestrian walkways have a choke point, and they don’t offer a natural view of the courtyard, which could discourage pedestrians,” Hoopingarner said. “The keyword is ‘inviting.’ There’s nothing in the walkways to draw you in.”

However, some residents were in favor of the project with its current design, calling it “the world class gateway West Hollywood deserves.” Austin Cyr, a West Hollywood resident, said the design would encourage him to visit and stay for a while.

“It feels like a space I’d be welcome to be a part of and free to move about,” Cyr said. “It’s a drastic improvement over what we have now, and I think it’s something we all would look on and enjoy.”