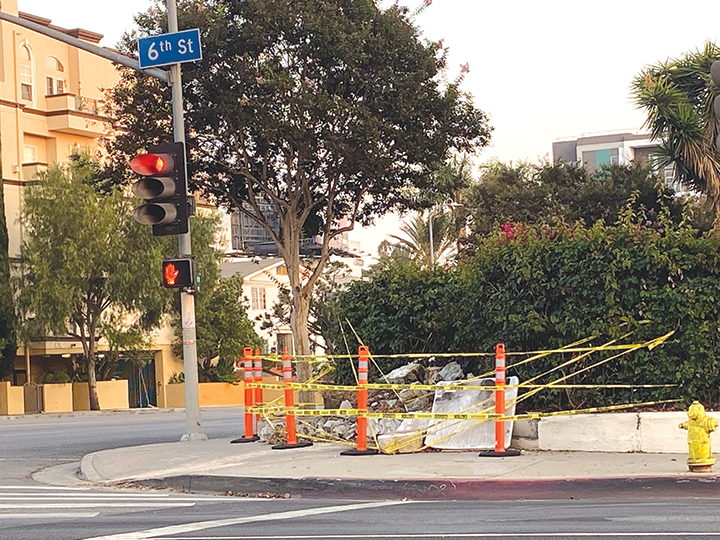 The vehicles came to rest on a sidewalk at the intersection of Wilton Place and Sixth Street, where damage was still visible on Tuesday. (photo by Edwin Folven)

Two brothers are facing felony charges after allegedly leading police on a pursuit on Sept. 2 that ended in a crash that killed another driver near the intersection of Wilton Place and Sixth Street.

Los Angeles Police Department spokesman Tony Im said officers from the Hollywood Division were conducting a human trafficking operation at approximately 11:40 p.m. near Melrose and Western Avenue when they saw a black Mercedes pull over and drop off a woman. The officers attempted to pull the vehicle over, but the driver sped away, Im added.

Police pursued the Mercedes into Koreatown, where the vehicle collided with an older model Toyota pickup at Wilton Place and Sixth Street. One man in the pickup was pronounced dead at the scene, and another man in the Toyota was taken to a hospital.

The Los Angeles County Office of the Medical Examiner/Coroner identified the deceased man as Dionicio Baten Ajanel, 31, of Los Angeles. The injured man was not identified. He remained hospitalized on Tuesday and is expected to survive, said Detective Mo Hassanzi, with the LAPD’s Multi-Disciplinary Collision Investi-gation Team, which investigates all collisions that involve a police pursuit.

Im identified the suspects as Keith Sparrow, 21, and Julian Sparrow, 22, of Los Angeles. He did not know which of the two men was allegedly driving the Mercedes. The suspects were booked on human trafficking charges and will likely face murder charges resulting from the fatal collision. The human trafficking allegedly involved prostitution, and police assisted the female victim, although Im had no further information about that part of the case.