Man agrees to plead guilty in attack at Turkish cafe 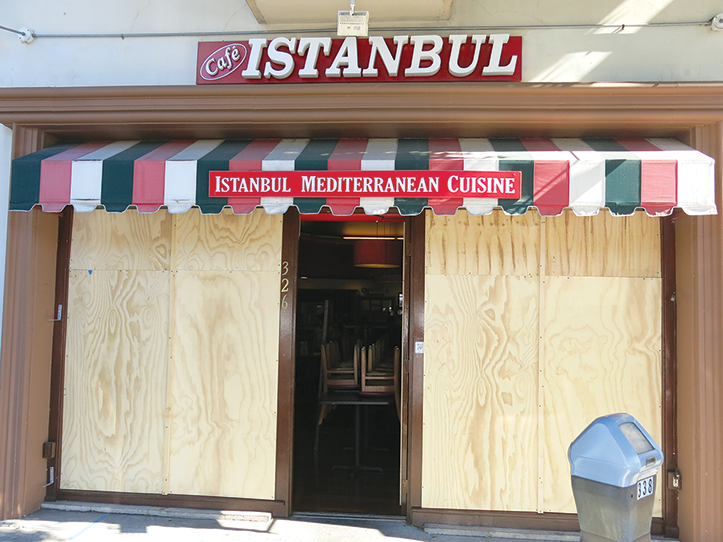 A 23-year-old man has agreed to plead guilty to attacking employees at Café Istanbul, which is shown in November 2020, shortly after the incident. (Beverly Press/Park Labrea News file photo)

A Glendale resident has agreed to plead guilty to federal criminal charges for attacking five victims at a family-owned Turkish restaurant in Beverly Hills last year and shouting anti-Turkish slurs, throwing chairs at the victims and threatening to kill them, prosecutors with the U.S. Justice Department announced.

William Stepanyan, 23, agreed to plead guilty to one count of conspiracy and one hate crime charge, according to a plea agreement filed in United States District Court. Turkey and Armenia have historically experienced significant conflict, part of which has stemmed from Turkey’s support of Azerbaijan in its border conflict with Armenia. When a new war broke out between Armenian and Azeri military forces in September 2020, tensions in Turkish and Armenian communities escalated. Numerous protests and counter-protests took place in Los Angeles County during the period when the war was occurring, prosecutors said.

According to his plea agreement, on Nov. 4, 2020, Stepanyan, who is Armenian-American, sent a text message saying that he planned to go “hunting for [T]urks.” Later that day, Stepanyan met with his co-defendant Harutyun Harry Chalikyan, 24, of Tujunga, and other Armenian-Americans to protest what they considered to be Turkish aggression against Armenians, prosecutors said.

Stepanyan, Chalikyan and other Armenian-Americans then drove to the Café Istanbul, located at 326 S. Beverly Drive. Stepanyan and Chalikyan entered the building and attacked the victims, according to the plea agreement. Four of the five victims were of Turkish descent. At least one of the defendants threatened to kill the victims, prosecutors added.

During the attack, multiple victims were injured. Also, the restaurant suffered at least $20,000 in damage and had to close temporarily, resulting in thousands of dollars in lost revenue, prosecutors said.

Stepanyan faces 15 years in federal prison. Chalikyan has pleaded not guilty to one count of conspiracy and five hate crime charges, and is scheduled to go on trial on Oct. 26.  The FBI conducted the investigation with assistance from the Beverly Hills Police Department.