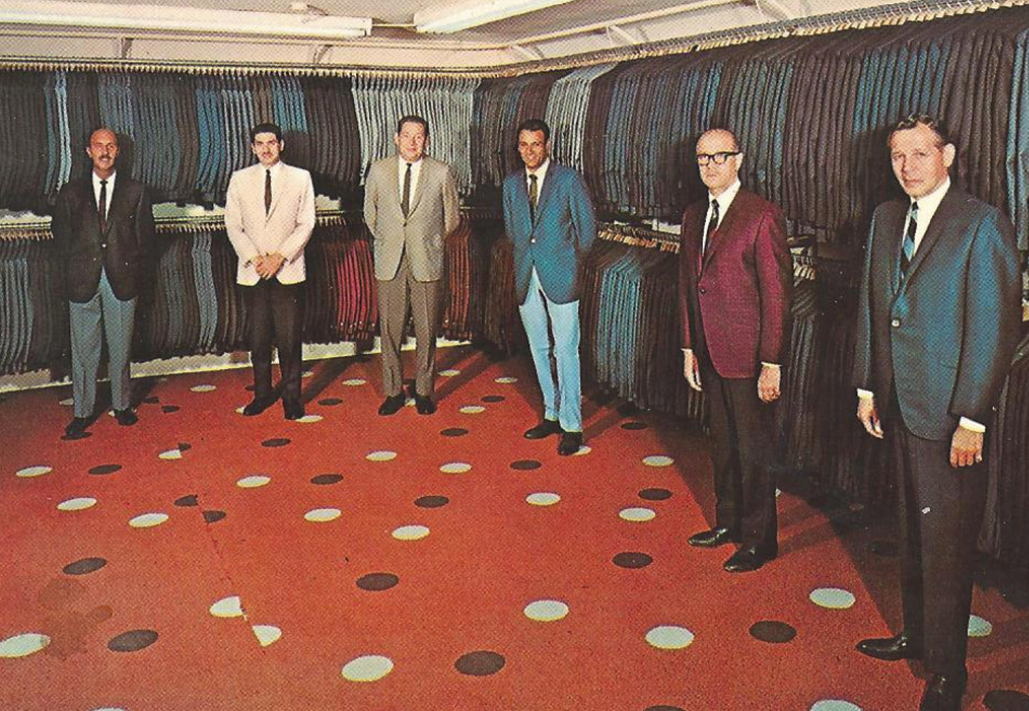 Stan Firestone, fourth from left and his sales staff made haberdashery an art form. (photo courtesy of Rick Firestone)

Nestled among bustling restaurants along Beverly Drive sits a men’s clothing store where any man looking for a suit can walk in and feel at home.

Just a few blocks from Rodeo Drive, tailors measure shoulders and inseams and mark suits with chalk as they discuss the latest ball game or the news around town.

In 1946, Bill and Stan Firestone opened one of the first men’s wholesale clothing warehouses in the West. Stan Firestone traveled all over the country to sell clothing; however, he kept his friends looking dapper by selling suits to them directly. In one case, a friend needed a black mohair suit to wear to a wedding. He sold his friend the suit for a few dollars over the wholesale cost, and soon found he was selling more items from the warehouse to his friends than he did on his trips.

Stan Firestone then received a phone call from a wedding guest wanting to know if he could also come to the warehouse to purchase some attire. From there, the Firestones’ customer base grew until in 1958, the family business – now called Malibu Clothes – moved into a building at 259 S. Beverly Drive.

The store, now run by Stan’s son Rick Firestone, keeps an information card for every customer who has ever bought an item from Malibu Clothes. The customer list reads like a who’s who of influential politicians, athletes and Hollywood celebrities.

Malibu Clothes also was one of the first retailers to supply major Hollywood studios with menswear for television and motion pictures. The store outfitted celebrities including Milton Berle and Cesar Romero, and TV shows such as “Dallas” and “Dynasty,” a personal favorite of Rick’s.

“Dynasty was fun because everyone watched it and I probably knew the show as well as the costume designer,” Firestone said. “It was just a great experience.”

Now, as the store celebrates its 75th anniversary, the family tradition has passed onto a new generation as Rick Firestone works alongside his son, Ian Firestone. The store’s secret to success, Rick Firestone said, is its “off-Rodeo” pricing and invested customer service.

“Here you have the family that owns the business working hands-on with the customers,” Firestone said. “You don’t get that service or our prices anywhere else. Once you shop with us, you’re a customer for life.”