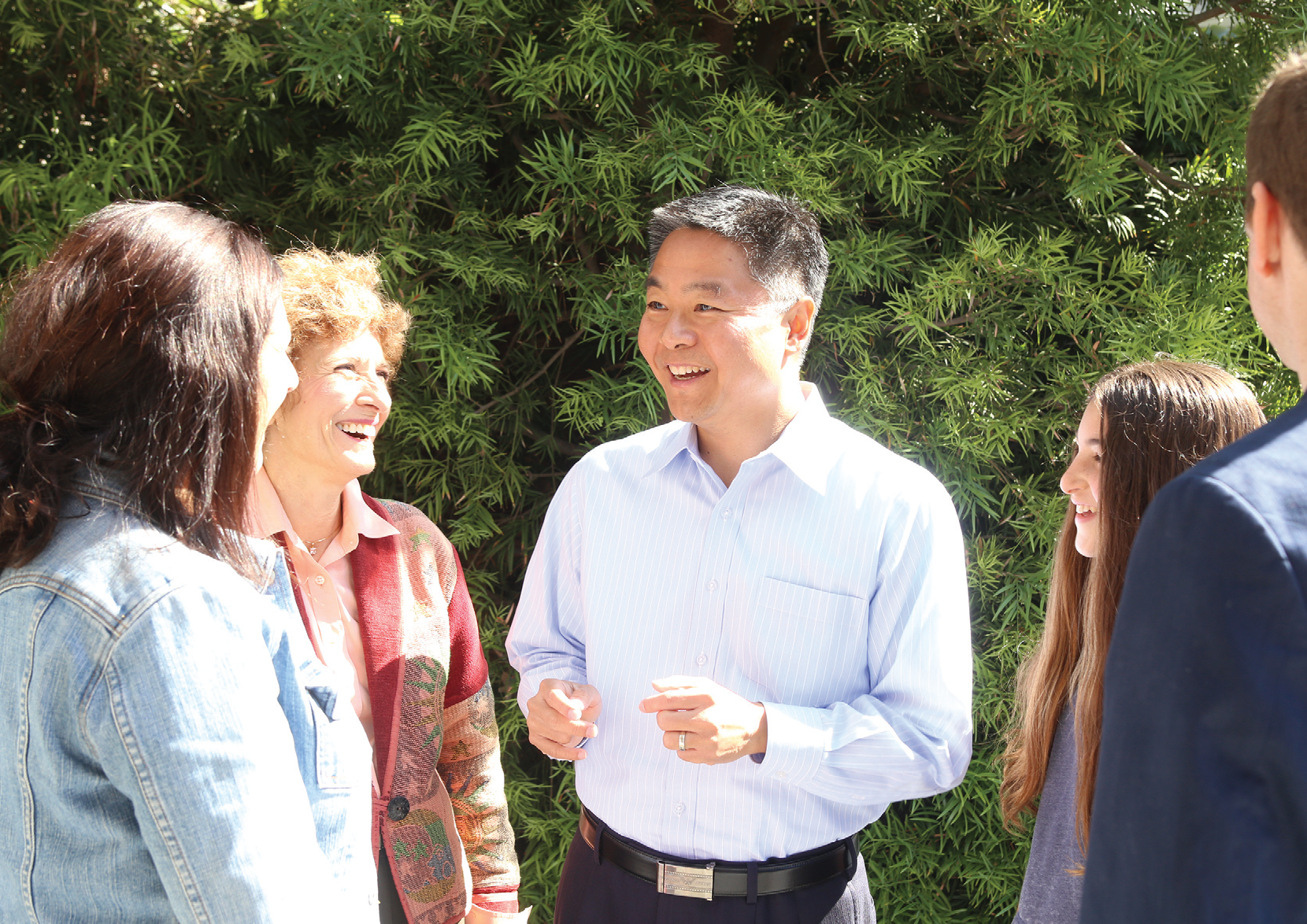 Congressman Ted Lieu is proud of the relationships he has forged with constituents. (photo courtesy of U.S. Rep. Ted Lieu’s Office)

U.S. Rep. Ted Lieu, whose 33rd Congressional District includes Beverly Hills, the Miracle Mile and portions of Hancock Park as well as much of the coast from Malibu to Palos Verdes, said he is hard at work in Washington, D.C., looking out for the interests of his constituents.

After succeeding venerable U.S. Rep. Henry Waxman in 2014, Lieu has been reelected three times and is currently serving his fourth term in Congress. In 2020, he received more than 67% of the vote, showing a high level of satisfaction among supporters. A longtime military veteran who served as an active duty U.S. Air Force officer in the 1990s and presently serves as a colonel in the Air Force Reserves, Lieu said he brings a military level of preparedness to Congress that has been especially beneficial during tumultuous times in recent years.

“There are many, many things I am working on. I think the immediate issues that we need to focus on are to crush the virus and get the country moving again,” Lieu said. “The vaccines have had a tremendous effect. I encourage anyone who has not gotten a vaccine yet to talk to their doctor about the benefits of being vaccinated. I do believe we will get back to normal sooner than later.”

The congressman also said the $1.9 trillion allocated for relief in the American Rescue Plan has helped people nationwide.

“The American Rescue Plan was de-signed to do four things: get shots into people’s arms, get people back in their jobs, get cash in people’s pockets and get kids back into schools,” Lieu said. “It’s already having an effect. Since January, more than 3 million jobs have been created, and unemployment claims have dropped by almost half.”

Every American can play a role, and conveying factual information is paramount in ensuring the public is informed, Lieu said.

“I think Abraham Lincoln had it right when he said public sentiment is everything. With it, nothing can fail; without it, nothing can succeed,” Lieu said. “I want everyone to know their power to shape public sentiment. For example, social media. If you write an interesting post, maybe you will affect someone in Beverly Hills or in Florida or Kentucky. Think about writing letters to the editor. If a lot of people write letters to the editor, then they will get their views heard and maybe start changing hearts and minds. And, it’s also about volunteering for causes and campaigns.”

Lieu, who is a member of the House Judiciary Committee and House Foreign Affairs Committee, as well as co-chair of the Democratic Policy and Communications Committee, said he is proud to have brought about meaningful change in his district and nationwide. In Los Angeles, Lieu cited his support for renovations at the Veterans Administration Hospital campus in Westwood as one his proudest accomplishments. The project will have a direct impact on homelessness, as it will renovate many of the site’s buildings into housing for veterans.

“Homelessness is absolutely a big problem in many parts of America. Locally, I am pleased with legislation with which I was involved regarding the West Los Angeles VA – the whole new master plan for what some people had been calling for for decades,” Lieu said. “Traditionally, the federal government has jurisdiction over veterans who are homeless, but I am now working on legislation to help cities and counties with resources to address their homeless populations. The legislation will provide $5 billion over four years to cities and counties to address homelessness if all goes well and it’s passed in Congress. That is our hope.”

The congressman also vowed to continue fighting for the truth regarding the Trump administration and supports the Congressional committee currently investigating the Jan. 6 insurrection at the U.S. Capitol. Lieu said it is critical to hold those who organized the insurrection accountable.

“I’m pleased that the House of Representatives has set up a bipartisan, select committee to investigate Jan. 6. We need to continue to look at what led up to Jan. 6, what occurred and the consequences of Jan. 6, so that we never have it happen again,” Lieu said. “If we don’t learn from history, there is a risk of repeating it, so that process will go on. I don’t think there should be any end game or any result that people have a preconceived notion about. I think prosecutors should see what the evidence is and follow it.”

Addressing climate change will be one of the biggest challenges in both the immediate and long-term future, Lieu said, as the situation is growing more dire every year.

“We are seeing more and more extreme weather events – whether it’s wildfires or drought or extreme heat –and if we don’t make changes soon, we are going to be inflicting much worse environmental conditions on our children and grandchildren,” Lieu said. “I do think it’s an existential threat to humanity as the years go on.”

“Local newspapers, and local news in general, plays a huge role,” Lieu added. “We know from poll after poll that people trust local news more than they do national news. Local news affects people right where they live, and it can bring people together.”

Togetherness will be more important than ever in the future, as it will take cohesion and collaboration to keep America moving forward, Lieu added. The congressman said while higher office may be an option down the road, he plans to remain laser-focused on his work in the district and in Washington, D.C.

“I love serving in Congress and representing the people of the 33rd Congressional District. I am very pleased how my colleagues elected me to House leadership,” Lieu said. “Life is long, and who knows, but right now I really enjoy serving as a member of the House of Representatives.”