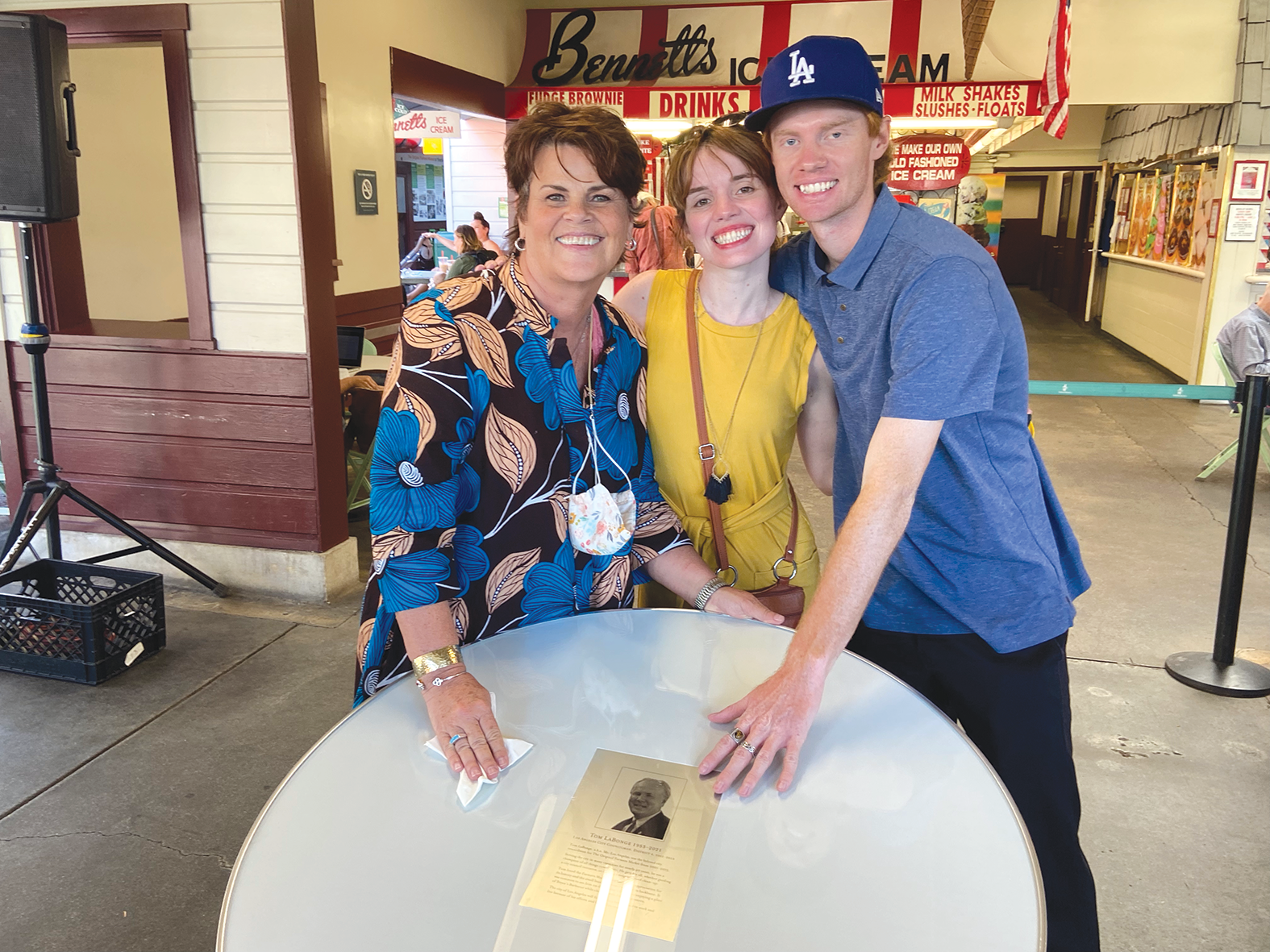 The late former Los Angeles City Councilman Tom LaBonge was a regular at the Original Farmers Market at the corner of Third and Fairfax, frequently stopping by for a bite to eat and the opportunity to meet and talk with merchants, friends and constituents.

On Sept. 23, LaBonge became a permanent fixture of the market when a table with a plaque honoring the councilman was unveiled on the east patio. LaBonge, who died on Jan. 7 at the age of 67, was known for his gregarious personality and love for Los Angeles. He would have been proud of the tribute at the Farmers Market, said his wife Brigid, who attended the unveiling ceremony with daughter Mary-Cate and son Charles, as well as LaBonge’s brothers and extended family.

“Tom loved the Farmers Market. He and I came here together 41 years. On one of our first dates, and always on Sunday after mass, we’d come here and eat,” Brigid LaBonge said. “And this is a special corner of the market for Tom because, c’mon, China Depot, Chinese food, doughnuts and ice cream, Tom lived for that food and it made him happy. This was home for him. It was a place for him to take off his jacket and relax.”

The plaque includes a photograph of LaBonge and a tribute honoring him as Los Angeles City Councilman for the 4th District from 2001-15.

“Serving the city in many capacities for nearly 40 years, he was a champion of all things community. He gave his all, whether guiding a City Council initiative, or leading a neighborhood clean-up,” the plaque reads. “Tom loved the Farmers Market, and had a deep appreciation for its history and the small business owners who are its backbone. It was common to see him on the market’s east patio enjoying a plate of Bryan’s Barbecue while chatting with fellow customers. The city of Los Angeles will forever be a better place to work and live because of his efforts and boundless energy.”

Angie Chang, owner of Bryan’s Barbecue and China Depot at the Farmers Market, said she was always happy to see LaBonge.

Hank Hilty, president of the A.F. Gilmore Company, owner of the Original Farmers Market, said it was fitting to pay tribute to LaBonge. He invited the public to sit at the table honoring the late councilman and share in his legacy and love for Los Angeles.

“He was a long-time friend of the market,” Hilty said. “You could hear him coming. He would say hello to his friends in this big booming voice that he had, and he would find himself at the end where his favorite places were and friends would gather. The market was a special place for him.”