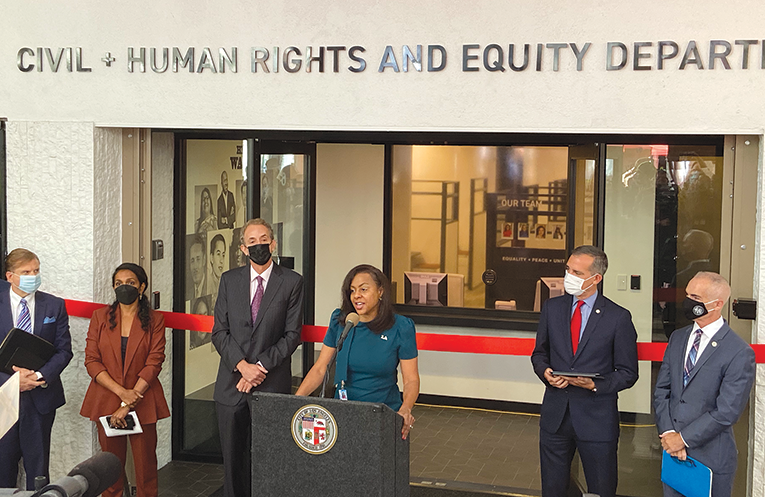 Los Angeles city officials cut the ribbon on the new permanent headquarters of the Civil + Human Rights and Equity Department on Sept. 13.

Commonly referred to as L.A. Civil Rights, the department was launched in July 2020 to address discrimination, racism and inequity in the city. Its new home is located in the L.A. Mall at 201 N. Los Angeles St., Ste. 6, a block from City Hall. The remodeled space was transformed into a modern facility that includes the John Lewis Conference Center, where the Los Angeles Human Rights Commission and the Los Angeles Reparations Commission will convene. The new center also includes offices for employees investigating reports of civil rights abuses and a walk up counter where people can report alleged civil rights violations in person. The department enforces the city’s laws prohibiting discrimination in employment, housing and the private sector.

“This office spans three former retail spaces in the Los Angeles Mall and it’s on the ground floor because we wanted it to be close and accessible to the community,” said Capri Maddox, executive director of the Civil + Human Rights and Equity Department. “This space belongs to all Angelenos. We know that people are going to be coming here on their worst days, on some of their toughest days. They may have just suffered an incident of hate or discrimination and it’s important for us to have an environment to help people become whole. This is a place where people can find justice, this is a space where people can make change and this is a place where progress will be made.”

“Everyone in L.A. deserves to be treated with dignity and to be protected from discrimination, and those values are at the center of everything we do at City Hall,” Garcetti said. “Capri is an outstanding leader and this new space provides L.A. Civil Rights with even greater opportunities to pursue justice and work to improve the lives of all Angelenos.”

“[This] marks a significant milestone in the city’s continuing work to address inequity and create opportunities for all our communities,” Feuer said. “We must commit ourselves to ensuring fairness and justice for every Angeleno. Only then will L.A. truly fulfill the hope and promise of the 21st century.”

The opening was interrupted briefly by a handful of demonstrators who booed when Garcetti was introduced and shouted when the public officials spoke. Some carried signs that criticized the city’s spending on the police department’s budget and work being done to address homelessness.

After city officials and department staff cut the ribbon, they went inside the John Lewis Conference Center to conclude their opening remarks.

“This is a day for justice and equity,” Maddox said. “This is the John Lewis Conference Center, named after a great hero, and he reminds us to get into good trouble. We are here to make a difference. The work that we will do in these rooms will allow us to lift people out of poverty, lift people out of homelessness, to prevent some of the systemic racism that has challenged so many for so long.”

Galperin said the demonstrators who gathered outside illustrated why the Civil + Human Rights and Equity Department is so important in its role of combatting racism and hate. Since its inception, the department has launched the L.A. for All campaign, an anti-hate campaign translated into 17 languages and displayed on more than 4,000 signs throughout the city, and the RENEW (Racial Equity and Newly Empowered Workplaces) Task Force, which brings representatives of the private sector together to promote racial equity in workplaces.

“I am very, very proud of this city, and very proud of [the] many people who have been behind creating this department. The [demonstrators] this morning really highlight why we need it so much,” Galperin said. “It’s a reminder of … the many divisions we still have in our nation, our world and even locally, and the need to bring people together to talk to each other. The need to understand what all of the inequities are and how to address them is even more pronounced. It’s a reminder to us of why we need this department more than ever.”

LA Board of Education commits to increased dual enrollment