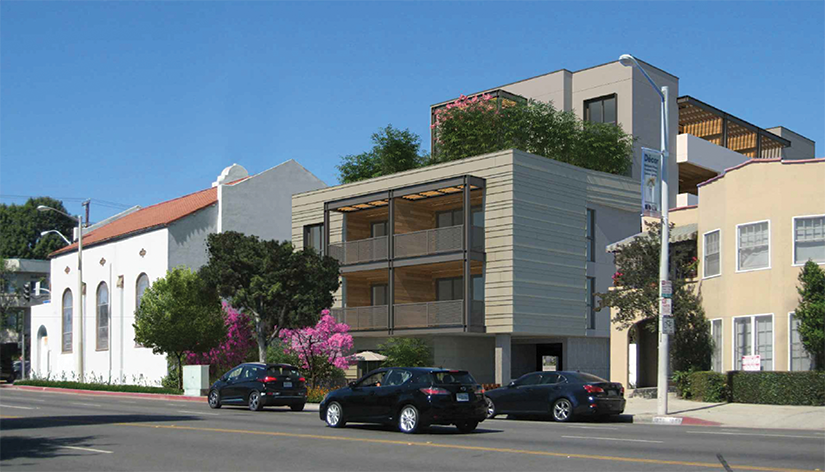 Another residential development could be on its way to the intersection of Fairfax and Fountain avenues, as a proposal to build a six-story multifamily structure next to a church with historical significance makes its way through the city.

The West Hollywood Historic Preservation Commission on Sept. 27 approved the proposal, which would allow the residential building at 1282 N. Fairfax Ave. and an overhaul of the Crescent Heights Methodist Episcopal Church, which was deemed an official local cultural resource in 1993.

The 23,000-square foot building will replace the church’s former parsonage building, which did not receive historic designation. The building will include 29 multifamily residential units, five of which will be set aside for moderate and low-income housing.

It will feature solar panels on the roof and have one level of subterranean parking for residents, according to proposal documents.

As part of the proposal, the owner – Alpine Equities, LLC – and the West Hollywood City Council would enter a Mills Act contract, in which the owner of a historic property agrees to maintain and rehabilitate historic structures. In exchange, the owner will receive lower property tax calculations on the historic portion of the property.

Antonio Castillo, a senior planner with the city’s Current and Historic Preservation Planning Division, said the proposed partnership would be a win-win for the city.

“The proposed work will help preserve a cultural resource and provide a net increase in residential units,” he said. “Without rehab incentives, the historic property may continue to deteriorate, as upkeep and maintenance of the property may not be financially feasible.”

Crescent Heights is a Spanish Colonial Revival style building designed by Harry Pierce and constructed in 1924. It was the longtime home of West Hollywood’s Methodist congregation until it was dissolved in 2011. In 2018, the building was leased to a Jewish congregation for temporary use as a synagogue.

The new owners will now use the church building as creative office space. Shahab Ghods of Plus Architects said that as part of the restoration, the stained-glass windows will be fully restored at a cost close to $200,000.

“We found a company of true artists that come and take the windows and remake them exactly to the original artwork,” Ghods said.

Aside from the windows, the building’s bell tower, metal cross and stucco façade will remain. Despite the effort, some commissioners and residents said the modern design of the residential building does not tie in with the historic nature of the church building.

“It is important that the Methodist church edifice rightfully remain the most significant structure on the site rather than be overpowered by the proposed project, thereby reducing it to comparative insignificance,” resident Lynn Russell said. “Its humble presence should not be overshadowed by an overwhelming structure, completely divorced from the main event.”

Ghods said that in initial planning stages, architects brainstormed ways to create a modern building with historic elements that would tie in with the Spanish Colonial Revival Style. However, after visiting similar project sites throughout the state, he said the architects decided to go a different route.

“What we understood from those [projects] is that we don’t want to mimic things from the past because we can’t redesign history,” Ghods said.

Commissioners also voiced concerns about the limited parking. The plan calls for residential parking, but there are no spaces allotted for the 11,000 square feet of commercial office space planned in the church.

“I was at that church building a number of times in the ’80s and ’90s, and it really is a beautiful thing and I admire the applicant for all the work they’re planning to do,” Commission Chair Michael King said. “But I’m concerned about the parking. Right now, there’s only street parking, and that always interfered with the events I attended there.”

Parking near the intersection of Fountain and Fairfax avenues has been a topic of debate in recent weeks as the city’s Planning Commission approved another proposal at the northwest corner of the intersection. Residents in the area say the new projects will exacerbate density, traffic and parking congestion in the neighborhood.

Despite their concern, commissioners said the parking allotment is not within their purview, and instead, that consideration lies with the Planning Commission.

Commissioners approved the proposal 6-1, with Commissioner Lola Davidson voting no.