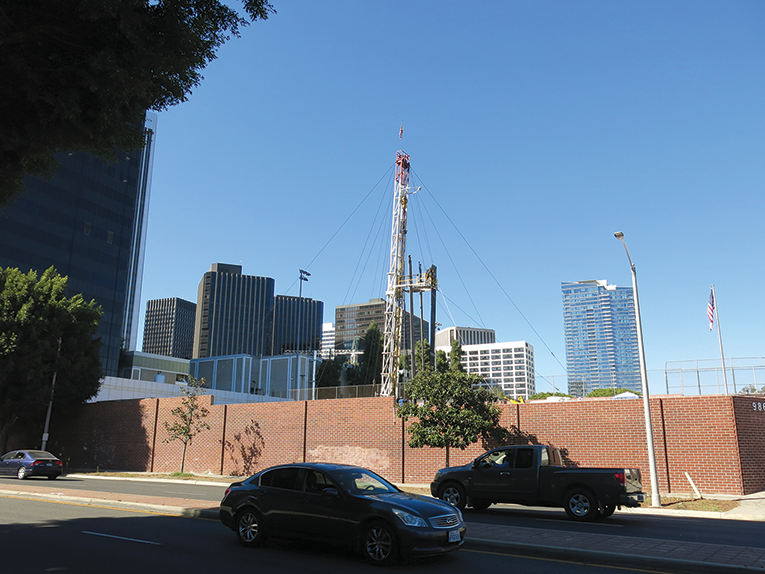 Thousands of gallons of water flooded the former Venoco site at Beverly Hills High School on Sept. 18, the district’s board president said. (photo by Cameron Kiszla)

The Beverly Hills Unified School District Board of Education unanimously approved an emergency resolution on Sept. 21 to spend $5 million on the former Venoco facility at Beverly Hills High School after a fire service line ruptured over the weekend.

Rachelle Marcus, the board’s president, said the area that was “inundated” with thousands of gallons of water was already scheduled to be part of the new remediation of the high school’s athletic facilities. Student activities have not been disrupted, she said.

The board held a special meeting on Sept. 21 and met with legal counsel to discuss anticipated litigation, according to the agenda. Marcus said she did not know if the board and district would be pursuing any litigation as a result of the line rupturing.

Venoco, an oil and gas drilling company, the district and the city of Beverly Hills have been in court several times since the company declared bankruptcy and vacated its oil wells at the high school. The entities reached a settlement in late 2017, and a $40 million remediation project to cap 19 wells at the high school was completed in late 2020.

Marcus said she does not know what caused the fire service line to break, but the board commended city and district officials for a speedy response.

“I have to compliment everybody that was involved,” she added. “The main thing was how quickly it was handled from the time it was reported to [to the time it was] brought under control.”

Beverly Hills director of public works Shana Epstein said the city received a report of water leaking onto Olympic Boulevard at 1:47 on Sept. 18.

“We responded to make sure the public right of way was clear,” she said. “We turned off the water from the meters. That’s what we can do. So there’d be no more water flowing into the property to minimize water loss. And then once the fire department responded, they were able to turn off more valves on property until [district officials could] get there to assess damage and begin repairs.”

Epstein did not have exact numbers, but said there is a “tremendous” amount of water to be removed. Workers were still pumping water of the area as of 5 p.m. on Sept. 21, according to a district representative.

“They’re still going to be able to remove water from the site. There will still continue to be lane closures. We ask everyone to cooperate with the police as they [patrol] Olympic,” Epstein said, adding that she hopes lane closures will last no more than a week.

Marcus said the oil drilling operations have existed at the high school since at least 1963, when she began working for the district. While they were operable, the city of Beverly Hills and the district received royalties, she said.

“I mean, it was a big thing,” Marcus added. “We were getting a lot of money every year from the royalties.”

However, as time went on, the royalties dwindled. Venoco declared bankruptcy in April 2017 and vacated the campus in May 2017. City and district officials called for a preliminary injunction to ensure Venoco completed its obligations in vacating the site, but a judge ruled against it. The two sides settled later that year.

According to the emergency resolution, equipment from the former Venoco facility remains on site and requires specialized expertise to evaluate the damage and make repairs. The flooding has resulted in “potentially unsafe conditions” on campus, the resolution states.