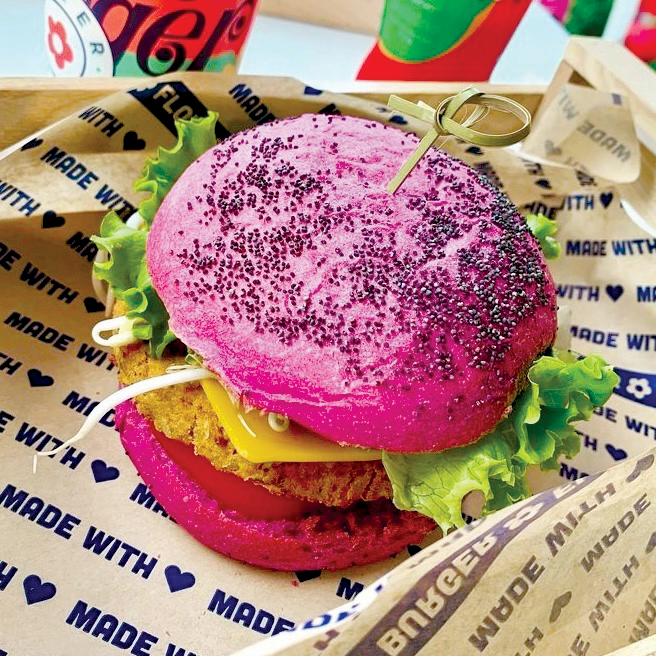 Italian singer Lucio Battisti once crooned, “With a flower in your mouth, everything you do is more joyful and fun.”

Flower Burger, a new restaurant planned for West Hollywood embodies those lyrics with its plant-based menu.

Last week, I toured the Flower Burger central kitchen in Culver City to meet some of the team. The kitchen is a hidden gem tucked away in a back alley that is accessible on Cadillac or David avenues.

The walls of Flower Burger are coated in colorful murals that showcase an upbeat, hippy vibe. The colorful wall motif makes a nod to the colorful hues featured in the restaurant’s plant-based burgers.

While admiring the artwork, I met owner David Platt, who, along with his wife Elena, brought the Italian burger concept to America. While the Platts were traveling in Italy prior to the pandemic, they grew tired of eating pasta daily. It was then they discovered Flower Burger.

“We were gaining weight with all the pasta we were eating in Italy and wanted a good burger,” David Platt said. “When we walked into a Flower Burger in Rome and tried their delicious vegan burgers between such colorful buns, we went back each day for three days straight.”

By the third day, the couple knew they had to bring Flower Burger to the U.S.

The Platts met with Flower Burger’s concept creator Matteo Toto to learn how he revolutionized the plant-based burger culture in Milan in 2015. Today, there are a multitude of branches bringing the chain’s flower power to cities across Italy, France, the United Kingdom and soon-to-be the Netherlands.

“Matteo is a bit of a hippy entrepreneur,” David Platt said. “His mission for the brand is to create an inviting, inclusive experience that aligns plant-based cuisine with fun and enjoyment.”

Excited to bring this new culinary concept to the U.S., the Platts collaborated with restaurant queen Barbara Lazaroff, and soon built a Flower Burger ghost kitchen in Culver City.  They drew up plans for their first brick-and-mortar restaurant in West Hollywood, which will open within the next few weeks.

Chef Luppi then showed us how the preservative-free burgers are assembled. The whole wheat buns range in color, from hot pink to an electric green, almost like eating a delectable treat straight from Willy Wonka’s emporium.

The vibrant colors aren’t caused by dye, but by rich spices. Turmeric provides a deep yellow, purple carrots produce a violet hue and concentrated beetroot juice and cherry extract churn out a vibrant pink. The buns evoke a familiar phrase – a rainbow leads to a pot of gold.

Each colored bun is perfectly paired with a different plant-based patty. Selecting the “Jungle Burger” with a green bun first, I dined on an oat and red kidney bean vegan patty that is enhanced with seitan (vegetable protein), along with breadcrumbs and a combination of golden onions, red peppers, salt and sunflower oil. The “wild sauce,” similar to a barbecue sauce, makes this high-protein patty extra delicious. In between the bun is fresh lettuce, baked tomato confit, a slice of baked zucchini and vegan cheddar “cheese,” which is made with a dairy-free cheese derived from coconut oil.

A generous handful of edamame comes with the burger, though potato wedges are offered too with seven unique sauces.

The signature mayonnaise sauce is made with 100% Italian organic soy milk, sunflower seed oil, apple vinegar, Dijon mustard, a squeeze of lemon and a pinch each of brown sugar and salt.

Other sauces include a “magik” sauce heightened with red onions and a “rocktail” sauce that is similar to Thousand Island, and made with a combination of ketchup, Dijon mustard, mayonnaise, nori algae, spices and notes of brandy.

Three burgers feature a chickpea patty. The yellow bun chickpea burger was the mildest in flavor. The tangy chickpea burger is enhanced with a house tartarella sauce flavored with capers and pickles and tastes like a French tartare sauce. The spicy chickpea burger offers the most heat with thin jalapeño slices and finely minced red onions that make a delightful sweet and sour combination.

The violet “Flower Burger” is made with a red kidney bean patty and topped with “magik” sauce, a tomato, lettuce, soybean sprouts and melted Flower cheese.

The showstopper is the “Cherry Bomb,” which has become an international favorite on Instagram. Between the fuscia bun is a lentil and basmati rice patty topped with tomato confit, rocktail sauce and crisp soybean sprouts.

Beverages include Paoletti soda imported from Italy, water and a variety of low sugar Olipop cans.

The West Hollywood grand opening is just a few weeks away. I’ll be there to welcome Flower Burger into the neighborhood and hope to see you there, too.

The Culver City ghost kitchen is open from 11:30 a.m. to 10:30 p.m. daily. Online orders can be made for pickup and delivery only.

‘Only Murders in the Building’ channels delightful podcast, murder-mystery energy