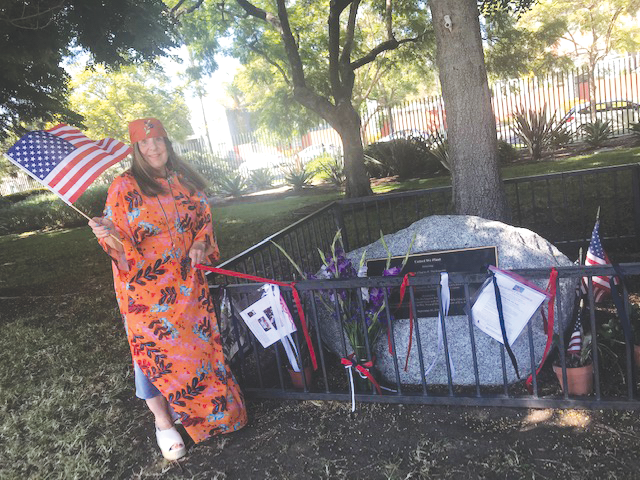 First-In Fire Foundation president Lyn MacEwen Cohen placed flags on Sept. 11 next to a stone marker installed in 2008 in the park surrounding the La Brea Tar Pits commemorating victims of the Sept. 11, 2001, terrorist attacks. The marker also honors the pilots, crew and passengers of American Airlines Flight 77, which was hijacked and flown into the Pentagon.

Flight 77 was piloted by Capt. Charles Burlingame and included a group of students and teachers who were headed to a naturalist field trip on Santa Cruz Island. Brad Burlingame, brother of the pilot, was a Miracle Mile resident.

The milestone is part of a memorial tree grove planted by the community. Eleven memorial trees specifically represent each student and teacher aboard Flight 77, Cohen said. Two additional trees represent a firefighter and officer, she added.

Cohen, who is also co-president of Miracle Mile Civic Coalition, said it is important to remember those who perished during the terrorist attacks.

“May we never forget 9/11 and how we transform our deep sorrow into what is most touching and beautiful in the words, united we stand,” Cohen said.