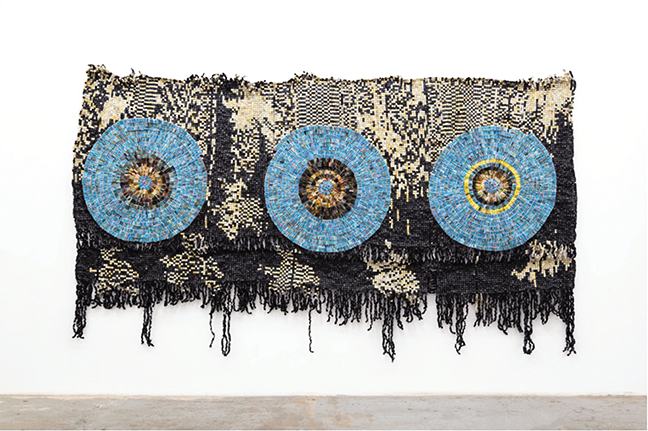 For his exhibition, Takadiwa created new works that defy gravity by floating in mid-air and cascading off walls. These pieces are Takadiwa’s investigations of power from a distinctly African perspective – one that embraces spirituality as a powerful resource for the continent’s future growth.

Takadiwa begins his work by collecting materials produced by Western corporations from dumping grounds in Harare, the capital city of Zimbabwe. His work highlights how global corporations are the continuation of Western cultural and economic influence in Zimbabwe.

“Trade is not only exchange, but a weapon of dominance, persuasion, to make people totally think like the other, because using these same materials makes them think like a Westerner because of [these commercial products’] presence in life,” Takadiwa said.

Once collected, Takadiwa and his team of craftspeople and art students go through an intensive process of cleaning, sorting and drilling numerous holes into each object before the items can be assembled into his densely-textured works.

For “Witch Craft: Rethinking Power,” Takadiwa produced works that look like traditional Korekore material culture like baskets or mats that would be used in the home. A myth brought by colonization states that the traditional mats serve as flying devices for witches.

Although he is referencing specific beliefs and myths about witchcraft, Takadiwa is using the mats as a touchstone to think about power more broadly, questioning why the spiritual power that exists in Africa is never considered as a source for its future development.

In his series, “Object of Influence,” Takadiwa’s tubular forms, created from materials such as bottle tops, toothpaste tubes, and golf tees, levitate throughout the gallery.

In his largest piece for the exhibition, “Three Little Witches/Karoi,” 2021, Takadiwa again subverts the power of Western products.

Karoi, which loosely translates to “little witches,” is the region where Takadiwa grew up. It is also an area that has long been associated with witchcraft, mostly due to the punishment of suspected witches under the British Witchcraft Act, which was meant to discourage natives from performing African medical practices.

In this piece, three blue circles constructed from toothbrush heads, emerge from a sea of black and white computer keys to show that Western technology and language have not been able to overtake the spiritual practices of the region.

Takadiwa has been a recipient of many awards since 2008, including the Award of Attendance from The Zimbabwe Olympic Committee, Harare, Zimbabwe in 2012.