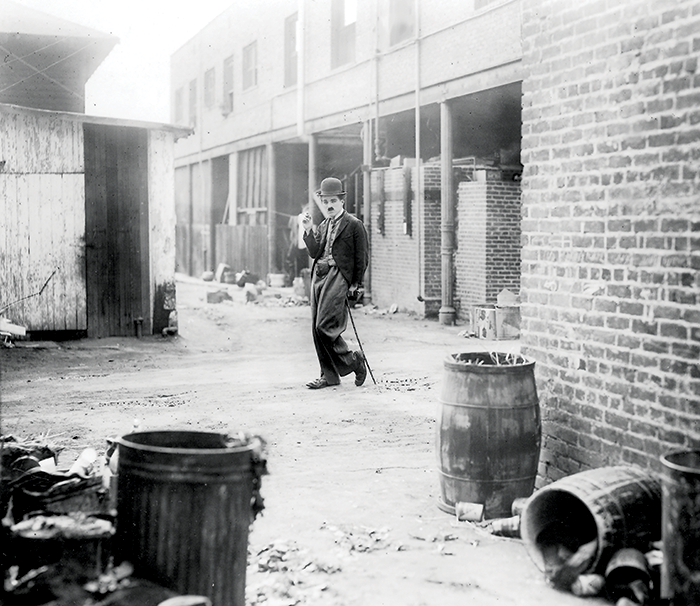 Charlie Chaplin filmed a portion of his 1921 film “The Kid” in the alley at Cahuenga Boulevard and Cosmos Street. (photo courtesy of Hollywood Heritage)

Hollywood Heritage will dedicate and unveil a plaque and signage in the alley at Cahuenga Boulevard and Cosmos Street in Hollywood to honor the legacy of three silent film era icons.

The alley will be named “Chaplin-Keaton-Lloyd Alley” in honor of Charlie Chaplin, Buster Keaton and Harold Lloyd.

Chaplin’s “The Kid,” Keaton’s “Cops,” and Lloyd’s “Safety Last!” were filmed in the heart of Hollywood at a nameless pedestrian alley just south of Hollywood Boulevard.

For convenience, and with limited other choices, early filmmakers often staged scenes near the crossroads of Hollywood and Cahuenga. Once the small town’s economic center, the area would become the busiest early filming site in all of Hollywood.

The alley has since been identified in two dozen early films, including works by Lois Weber, Grace Cunnard, Cleo Madison and Gale Henry. Actors such as Douglas Fairbanks, Olivery Hardy, Colleen Moore and Harry Houdini filmed scenes in the alley.

In recognition of the silent film trio’s legacy on film and Hollywood, the alley will be dedicated at 2 p.m., Sept. 29. It will be the key event as part of the city’s National Silent Movie Day celebration, which is held annually to advocate for silent film presentation and preservation.

As part of the celebration, a special presentation will screen in the windows of the Dash building at 6363 Hollywood Blvd. in the evening.

The public is invited to view the installation and to use a QR code to download a short tour of filming locations around the alley.

In addition to the dedication, Hollywood Heritage will stream its original documentary “The Kid 100 Years Later” from Sept. 29 to Oct. 6. Tickets are available at hollywoodheritage.org.