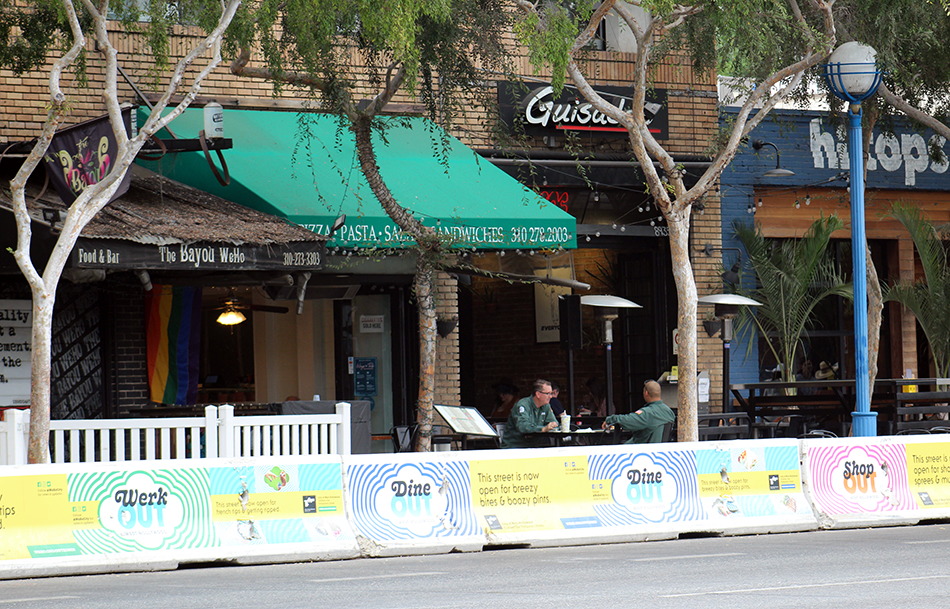 More than 70 businesses throughout West Hollywood currently use OUT Zones to attract patrons. (photo by Brynn Mechem)

When the pandemic began, the West Hollywood City Council attempted to keep restaurants afloat by allowing extra outdoor seating, but as the city looks toward the future and the possibility of keeping outdoor dining, city leaders said some changes need to be made.

In July 2020, the city introduced its Outdoor Use Temporary Zones, or OUT Zones. The temporary outdoor expansions provide commercial space in public rights-of-way so restaurants, shops, gyms and salons can ensure social distancing protocols are met.

More than 70 West Hollywood businesses have been approved for the temporary permits. The majority – about 55 – are restaurants, with a few gyms, salons and shops utilizing the zones as well.

Hours of operations were changed to allow businesses to stay open later in the evening, and the city allowed many businesses to build structures in the street temporarily without requiring a permit.

“Throughout the pandemic, we knew that continuous improvement was better than delayed perfection,” said John Keho, director of planning and development services. “We knew we weren’t doing everything perfectly, but we were always trying to improve things as we went along.”

During a planning workshop Aug. 30 that attracted about 30 residents, 89% indicated they enjoyed the ability to eat outdoors. Another 83% wanted the outdoor spaces to continue, a concept city leaders said resonates throughout the city.

But now, as staff considers what the future of the zones will look like after the pandemic ends, changes need to be made to ensure continuity throughout the city.

Because many permits were waived during the pandemic, Keho said staff would have to reassess what businesses have OUT Zones and make sure all structures meet the city’s permanent structure requirements. A timeline for when a reassessment would happen has not yet been determined.

Danny Rivas, the city’s code compliance manager, said new structures would need to be built with noise-mitigation measures in place. Since the start of the OUT Zones, the city has received several noise-related complaints related to amplified music and general business operations, he said.

West Hollywood resident Midge Barnett, who lives next to Craig’s restaurant on Melrose Avenue, said she likes the outdoor dining options during the pandemic, but the noise often travels into her backyard.

“I’m glad people are still able to work and go out to dinner, but this was supposed to be a temporary solution,” Barnett said. “I don’t know why I still need to have 70 people dining in my backyard every night. I don’t want that on a permanent basis.”

However, many business owners say the OUT Zones helped them keep the doors open during the pandemic, and a continued OUT Zone program could help them recuperate lost business.

Gracias Madre, a restaurant on Melrose Avenue, already had an outdoor patio prior to the pandemic, and added seating along the sidewalk, which manager Lauren Gilbert said helped bring in more customers while maintaining safety protocols.

“Once the capacity restrictions on restaurants loosened, it was a great extra source of revenue to build upon,” Gilbert said. “We plan to keep those tables as long as the program is available.”

Staff now need to determine what type of zones would be allowed to continue. Keho said outdoor dining has been allowed for more than 25 years, but mostly as a row of tables abutting a building.

Throughout the pandemic, tables have been located on a majority of sidewalks and in parking spaces in front of restaurants. Jackie Rocco, West Hollywood’s director of public works, said in the future the city will need to develop a strong system to ensure public right-of-way isn’t disrupted by OUT Zones.

Of the residents surveyed during the workshop, 38% said they’d like to see curbside space used for outdoor dining, while another 62% said they’d prefer to see it used for services such as valet, rideshare spaces and food pick-up. Another 54% said they felt uncomfortable or congested when walking through an area with outdoor dining.

“I have a problem with the outdoor dining venues adjacent to the sidewalk, because it’s taking up parking meters and parking spaces that are precious here in West Hollywood,” resident Dan Morin said.

City staff presented a variety of zone options, including tables in on-street parking, an expanded sidewalk in parking spaces and tables within a restaurant’s surface lot. Keho said the type of zone would likely be determined on a case-by-case basis depending on what space allows.

However, Rocco said no matter which design is chosen for an area, it will be done with pedestrians in mind.

“Whatever designs we move forward with can’t obstruct access,” Rocco said. “The sidewalks need to be clear so pedestrians and dining patrons can enjoy the outdoors safely.”

LACMA will honor Spielberg, Wiley and Sherald at 2021 Art+Film Gala