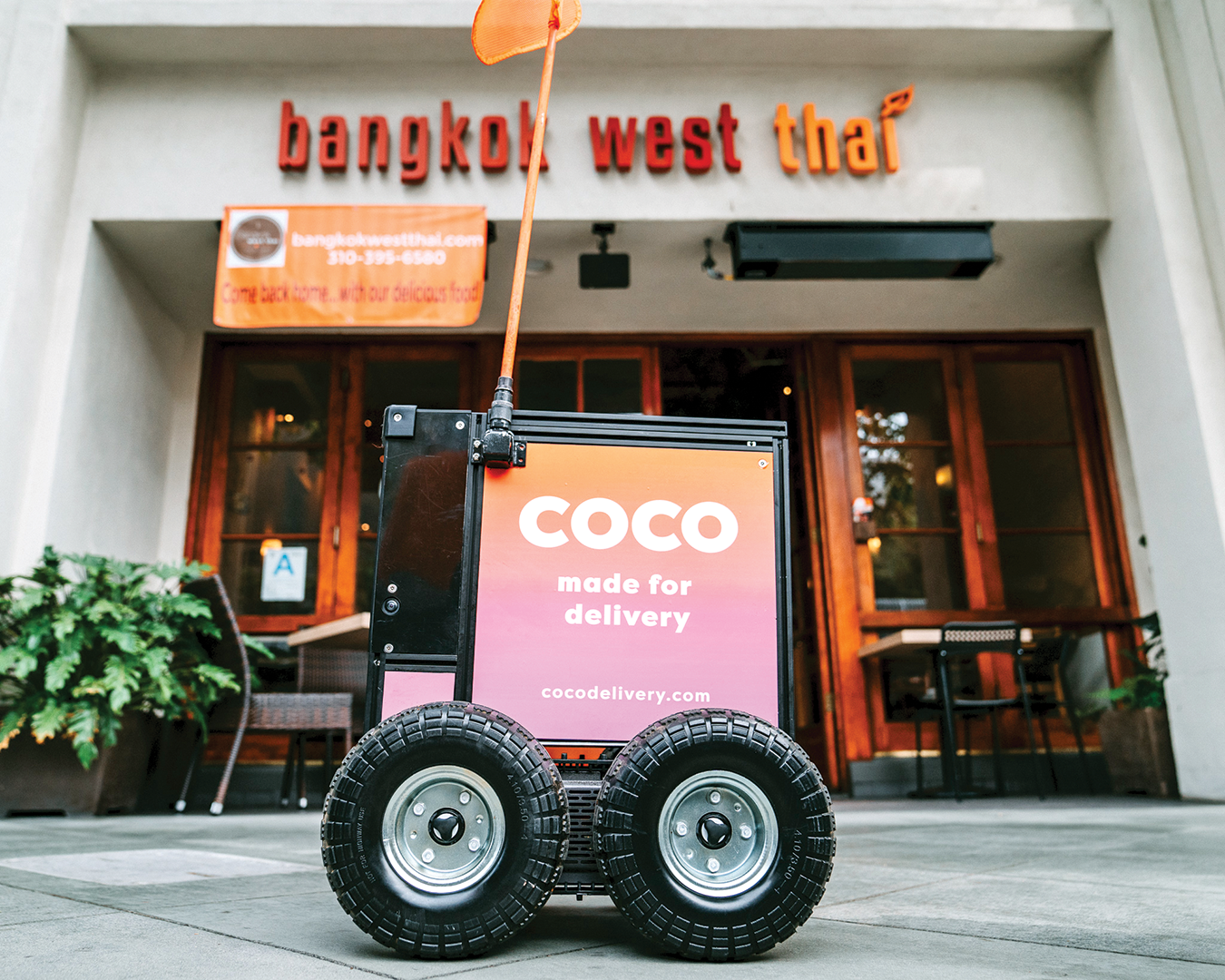 A four-wheeled, remote-controlled, Wall-E-esque food delivery robot – Coco – could soon be cruising the sidewalks of Beverly Hills if a robotics company already operating in Los Angeles can work out the mechanics.

During the Beverly Hills Chamber of Commerce Government Affairs Committee meeting on Sept. 9, representatives of Coco said the company is working with city staff in hopes of expanding its services through a pilot program.

“Our mission is to make last-mile delivery more sustainable, reliable and cost effective for local businesses and their communities,” Coco’s government and community relations manager, Carl Hansen, said. “The way we’ve done that is with a small delivery robot that actually isn’t automated. It’s remotely piloted. There are cameras that surround the vehicle. It’s controlled by a remote operator that pilots the vehicle at low speeds from a restaurant or a grocer or small market to a resident or an office worker or a tourist.”

Coco is built to only travel short distances, between one and two miles. Hansen said a “significant” amount of restaurant and market deliveries are within those parameters.

“There’s no reason to have a 2,000-pound car deliver a one-and-a-half-pound burrito that distance,” he said. “It’s unnecessary traffic. It’s probably illegally parked or double parked in a bike lane, perhaps, when it’s picking up the order because there’s not accessible parking. It’s emissions. And a robot can do that much cheaper, much more sustainably.”

With Coco, no courier is necessary, which leads to faster deliveries, Hansen said. The robot fleet of hundreds are fully insulated and stay locked until opened through a link sent to a user’s smartphone at the target location, he said.

They are “professionally piloted” at low speeds on sidewalks, Hansen said. The robots have flags on them with blinking lights and are “very obvious” to motorists and pedestrians when crossing crosswalks, he said.

“They essentially act like a pedestrian but, like the most inferior form of pedestrian, meaning that they yield to anybody else that is using the sidewalk space,” Hansen added. “They move at walking speeds – of about the speed of a golden retriever.”

He said Coco works with municipalities, community groups, chambers of commerce and business improvement districts to determine the best routes for its robots. Hansen added that the system can be altered to accommodate street closures or major events.

“[Highly-trafficked locations] are not actually good areas for us to operate,” Hansen said. “It’s just not to our advantage to be where it’s busy when we’re piloting.”

Coco has been quickly adopted in the neighborhoods it serves, especially since the company cuts the cost of car-based deliveries in half, he said. The restaurants then determine what to do with those reduced costs.

“They see the savings, and that’s why they’re partnering with us,” Hansen said. “But not just for the cost-saving reasons. We’re actually significantly more reliable. We have a 97% on-time delivery rate, which is pretty much unheard of in this space for the local portion of those orders. So, that’s super encouraging.”

“Coconauts” – many of whom are UCLA students – pilot the robots, which weigh under 100 pounds and are approximately two feet tall, remotely from home or a dorm room using a laptop, a few software packages and a controller.

He said Coco has not been involved in any “major” incidents, although the robots have tipped over on a few “rare” occasions. In the event that Coco tips over or is otherwise tampered with, which happens “very irregularly,” field operators are dispatched to the location, and the restaurant or grocer is notified to prepare a new order, Hansen said.

He added that he does not believe the robots would violate the city ordinance on electric bikes and scooters, as the language of the ordinance does not address the type of vehicle Coco deploys.

“There’s not a current policy change that needs to be made, but we don’t just go into cities and operate without first reaching out to the community and making sure that this is something that they’re comfortable with,” Hansen said. “We work through the city process to launch. In a lot of places, there isn’t policy yet, and we are allowed by the city to operate beforehand. Part of the advantage … of that is they get some data on how the program works. And that can help them shape the regulations that they eventually do adopt.”

‘Tis the season to ponder restrictions