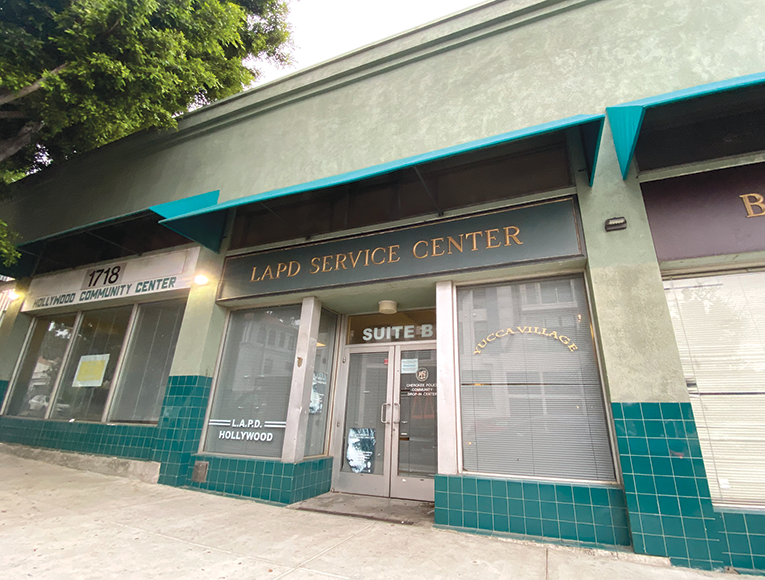 A space formerly used by the LAPD on Cherokee Avenue will serve as a base for a nonprofit that will send teams out to help people suffering from mental health crises. (photo by Edwin Folven)

The Los Angeles City Council on Aug. 31 took another step toward implementing a program that will dispatch mental health professionals and social service providers instead of police officers to some incidents involving people suffering mental health crises.

Introduced by Councilman Mitch O’Farrell, 13th District, the council approved a vacant city-owned storefront at 1710 N. Cherokee Ave. to be used by the nonprofit Urban Alchemy, which will coordinate responses for people suffering mental health crises in Hollywood and Venice under the under the pilot program. The space is adjacent to a parking garage operated by the city just north of Hollywood Boulevard, and it was formerly used by the Los Angeles Police Department as a drop-in center for officers working in the Hollywood Entertainment District.

“This retail space at the Cherokee Avenue garage had been under-utilized for quite some time, and I’m very supportive of seeing that it goes to a better use,” O’Farrell said. “This location in the heart of Hollywood will allow Urban Alchemy the space to appropriately perform this critically needed work.”

The city has selected Urban Alchemy as a service provider for the Crisis and Incident Response through Community Lead Engagement pilot project, known as CIRCLE. The program is anticipated to be implemented this fall. When calls come into 911 to report an incident involving someone possibly suffering from a mental health crises, dispatchers will notify Urban Alchemy, which will send a team to the location.

The pilot program is being implemented as an alternative in situations where an armed police response isn’t warranted. Brittney Weissman, executive director of Hollywood 4WRD, a nonprofit addressing the homelessness crisis, said the pilot project has much potential for helping those living on the streets and suffering from severe and chronic mental illness.

“We support some kind of alternative resources and response other than law enforcement when it’s appropriate,” Weissman said. “It does help to have more outreach and engagement in the field.”

Weissman added that Hollywood 4WRD has met with Urban Alchemy, which is already working with unhoused individuals in Hollywood to provide COVID-19 vaccinations and health education. Calls and emails to Urban Alchemy were not returned.

“The CIRCLE pilot program has not started yet, but Urban Alchemy is providing services in the area,” Weissman added. “They have teams in the filed already. We have high hopes it will be effective, in conjunction with all the other providers in the area.”

“There’s a lot of support around the idea of removing police officers from nonviolent response, and Los Angeles is harnessing that energy to create a model that strengthens the human bonds that are essential to public safety and seeks to help, not punish, our most vulnerable Angelenos,” Garcetti said. “By diverting nonviolent 911 calls regarding homelessness away from law enforcement to outreach teams and trained crisis responders with preexisting relationships in our communities, CIRCLE is a first-of-its kind, 24/7 program to ensure that our unhoused neighbors are met with the compassion and care they deserve.”