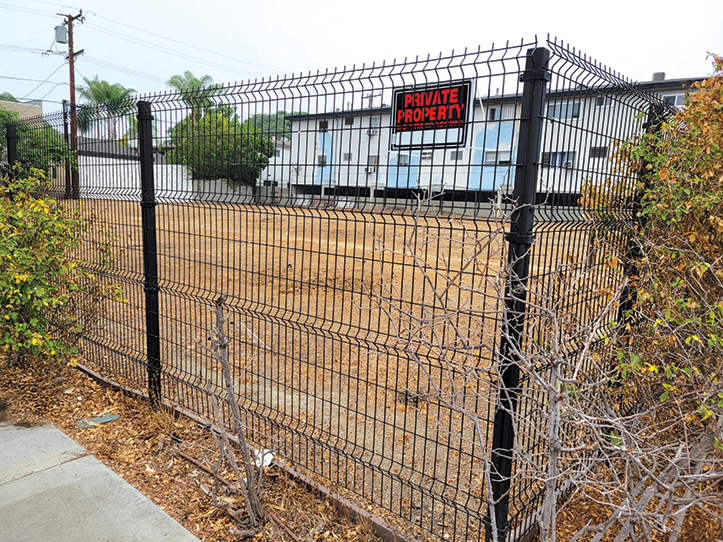 A community garden is planned for an empty lot at the intersection of Detroit Street and Lexington Avenue. (photo by Brynn Mechem)

A community garden, a new dog park and increased traffic safety measures are among several changes coming to the east side of West Hollywood, city leaders said at a community update meeting on Sept. 1.

“There’s a lot of exciting projects that are going to be happening on the east side,” assistant city manager Oscar Delgado said. “We’re eager to get them underway.”

Drivers can expect several changes within the next few months, traffic engineer Richard Garland said, as the city undertakes efforts to increase pedestrian and vehicular safety on east side roadways.

First, the city will wrap up an effort to replace lights in 2,200 street poles with LED bulbs. The new bulbs provide enhanced street lighting and cut the city’s street electricity consumption by about 50%, Garland said.

To improve pedestrian safety, in-roadway warning lights will be added to two crosswalks without a traffic signal to notify drivers when pedestrians are crossing. The additions will be installed along Santa Monica Boulevard at Greenacre Avenue and Poinsettia Place.

Additionally, modifications will be made to the traffic signals on Fountain Avenue and Santa Monica Boulevard to allow pedestrian walk signals that are parallel to vehicular signals to illuminate a few seconds before drivers are given a green light.

“This will allow pedestrians to get a head start on crossing the street, which will make it much safer for them,” Garland said.

Through the city’s 2017 pedestrian and bicycle mobility plan, the neighborhood between Willoughby Avenue, Gardner Street and Vista Street was identified for a priority project. With the installation of a temporary traffic diverter and curb extensions, city staff hopes to minimize neighborhood cut-through traffic and slow down local traffic to provide a safer pedestrian environment.

Lastly, city staff will install decorative lanterns across Santa Monica Boulevard between North Vista Street and La Brea Avenue. The lanterns can be programmed with various colors for special events or holidays.

“There are lots of road improvement projects in the works that residents will be happy to see implemented fairly soon,” Garland said.

Aside from enhanced traffic measures, the city will begin several short-term transformations at Plummer Park. After being delayed by the pandemic, staff within the next month will determine what conservation and preservation efforts could be made at Fiesta Hall and Great Hall/Long Hall.

A consultant will estimate the cost of proposed improvements and bring a plan for restoration before the City Council.

“This effort is to ensure that the documented and character-defining features and essence of these facilities are going to be restored and cared for,” said Ric Abramson, urban design and architecture studio manager.

After the temporary work begins, staff will begin discussing long-term updates to Plummer Park. A community-based advisory board will be formed to determine plans for general park improvements and a potential permanent dog park.

Finally, the city will add a temporary community garden at Detroit Street and Lexington Avenue. A community garden was previously located on the lot, but it closed in late 2017 for the development of private housing, which has since been delayed.

The garden, which will be in place for 24 months until the development undergoes construction, will feature raised garden beds and community plots.

“I’m really excited about a lot of the improvements, particularly the community garden,” West Hollywood resident William Seegmiller said. “I’ve been looking forward to that coming back every time I’ve driven past that plot.”

The garden will be installed by the end of October or early November. Those interested in a plot can email recreation@weho.org.

LA Board of Education commits to increased dual enrollment