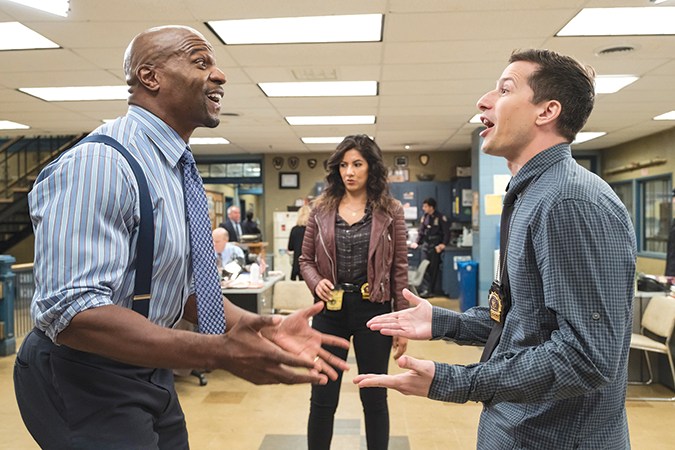 During the pandemic, comfort viewing helped plenty of folks survive, and those Emmy voters noticed, rewarding escapist joy rather than the usual suspects. One former Emmy winner didn’t participate in Sunday’s festivities, instead settling for a finale exuding nostalgic delights, charming humor and one last heist.

When Fox canceled “Brooklyn Nine-Nine” after five years, NBC picked it up the next day, following a major digital uprising. But the final three seasons got shorter and shorter until the inevitable. Across 10 episodes, season eight at least provided the whole gang proper sendoffs, never forgetting the laughs along the way.

That’s a particularly important point considering how frequently promising sitcoms favor sentimentality sans humor to close things out (i.e., “How I Met Your Mother”). “Nine-Nine’s” greatest strength is that consistency. Since 2013, this show served up pure joy, a kind of optimism amidst office shenanigans unlike other series.

The premise is relatively simple: the 99th Precinct undergoes an overhaul when Captain Raymond Holt (Andre Braugher), as sophisticated as he is monotone, replaces a passive former boss. Holt has dreamed of this position for years, continually overlooked as both a gay and Black officer in the NYPD, regardless of his role in various high-profile cases over the decades.

Of course every immovable object requires an unstoppable force. Cue Detective Jake Peralta (Andy Samberg), as immature as he is competent as an officer. The series might’ve been green lit because of Samberg’s involvement post-“SNL,” but the cast all deserve just as much, if not more, attention. Detective supervisor Terry Jeffords (Terry Crews) might appear intimidating, but he fears his twin daughters Cagney and Lacey and doesn’t respond well when anyone touches his yogurt.

Detective Rosa Diaz (Stephanie Beatriz) can match Holt in emotionless poker, but her sincerity seeps through over the years, especially through her affinity for a good prank. Detective Charles Boyle (Joe Lo Truglio) is the opposite of Diaz, wearing every emotion for all to see, constantly spewing innuendos without thought for crass phrasing.

And Detective Amy Santiago (Melissa Fumero) loves organizing far too much – to laughable levels, of course – for the average Joe, but not Holt, who considers this behavior the norm. The series particularly shines on this point. Holt’s arrival brings out the most hilarious aspects of everyone in the precinct, himself included.

Various in-office adventures bring them all together, from major cases to yearly heist challenges. A host of virtual clips feature some of the most memorable moments, including Peralta telling a criminal lineup to sing the Backstreet Boys’ “Tell Me Why.”

It’s hard to nail down one reason “Nine-Nine” belongs in the comedy canon. In fact, the first few episodes might not entice some viewers to keep going. But as the series builds on each character’s quirks and delves into more silly terrain, the outcome is marvelous.

Background characters like veteran officers Hitchcock (Dirk Blocker) and Scully (Joel McKinnon Miller) are gross and wonderful simultaneously, while Holt’s assistant Gina Linetti (Chelsea Peretti), from season one to six, brings heart to all those hopeful influencers out there.

Regardless of the personality type – vain, uptight, juvenile, distant – the whole team earns their due. That’s thanks to the combined efforts of creators Dan Goor (“Late Night with Conan O’Brien,” “The Daily Show”) and Michael Schur (“The Office,” “The Good Place”), who both worked on “Parks and Recreation.”

This might be one of the most positive shows on television, employing situational humor that doesn’t mock and demean anyone in the process, a rare feat lately in the comedy game. Characters empathize with each other, respecting their divergences, though they certainly exploit what they know about each other to get a good rise, which only proves how close they all are.

Now, prior to the last season, however, the country erupted in protests that prompted some revisions across the last 10 episodes, including one officer quitting, no longer able to justify staying amidst systemic wrongs.

Certainly “Nine-Nine” is guilty of the same kind of optimism found in shows like “The West Wing” and “Parks and Rec,” the kind that promotes the need for both sides to work together in good face. It’s a nice thought that doesn’t account for those who are clearly at fault.

Perhaps, to wax pseudo philosophical, “Nine-Nine” can be considered a platonic pure form, an ideal worth striving for. To view it this way, however, doesn’t mean it can’t be deemed as naive, perhaps dangerously so.

Or it’s merely optimistic escapism. Like most fiction, it must be watched in tension with reality and fantasy. Scrutinized for the trappings of its premise, attempting to address some social issues but falling short, but still enjoyed for what it offers: incredible characters, gut-busting sequences and severe excess of heart.

Southern cooking is king at Yard Bird Table and Bar