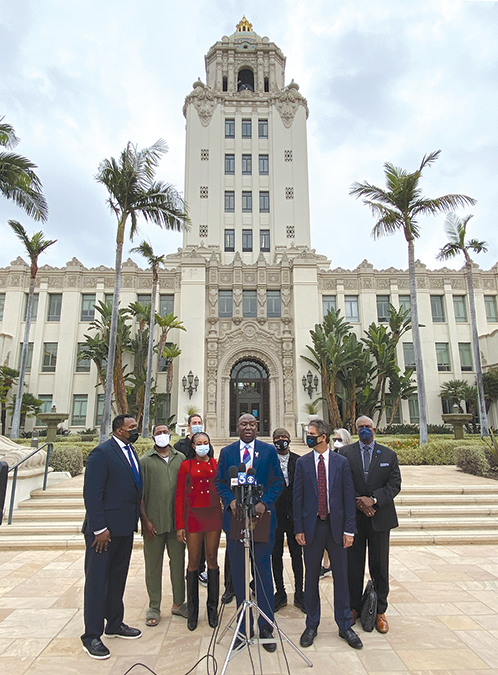 A group of attorneys has filed a class-action lawsuit against the Beverly Hills Police Department, alleging that officers have repeatedly targeted Black individuals through a task force that patrols Rodeo Drive.

On Sept. 1, attorneys Ben Crump, Brad Gage and Mark Harris held a press conference to announce the lawsuit, which was filed on Aug. 30 on the behalf of tourists Khalil White and Jasmine Williams, as well as the general public.

He is among a handful of attorneys representing White and Williams, two Philadelphia residents who were arrested on Sept. 7, 2020, after riding scooters on Rodeo Drive, according to the lawsuit.

Crump said their “only crime was riding a scooter while Black.” He said the two, who were staying in a Beverly Hills hotel, were riding the scooters on the sidewalk, which is legal in Philadelphia.

“When we came up this morning, we saw a white woman riding a scooter on the sidewalk,” Crump added. “We all said to ourselves, ‘Hold on. She should be arrested based on what they arrested you for.’ But nobody did anything to her.”

The lawsuit states that White and Williams were detained without cause and questioned “on multiple fabricated charges.” Gage said the charges were for operating a scooter on the sidewalk and resisting arrest, both of which were dropped.

After White was handcuffed, Williams asked for his hotel room key and was subsequently arrested as well, the attorneys said. They also stated that officers threatened to use a Taser on White multiple times.

The police department, however, tells a different story. In a statement, BHPD Chief Dominick Rivetti said the two had been stopped by police earlier in the day on Sept. 7, 2020, and warned that riding scooters on the sidewalk in Beverly Hills was prohibited. After committing the same violation later in the day and providing false information to police, White and Williams were arrested, according to Rivetti.

“The women and men of BHPD take an oath to protect human life and enforce the law – regardless of race,” the police chief said. “Any violation of this pledge is contrary to the values of this department. We take all concerns regarding the conduct of our officers very seriously.”

Rivetti said BHPD officers routinely question individuals when officers suspect that they are involved in criminal activity or another violation.

Additionally, the department responded to numerous calls from the business community last summer that included reports of burglaries, shoplifting, street gambling and public intoxication, he said.

“This rise in crime during the pandemic and following months of civil unrest was not unique to Beverly Hills,” Rivetti said. “We received daily complaints from Rodeo Drive businesses and, in response to community concerns, our department created the Rodeo Drive Team to ensure proper staffing and appropriate response times. As a result of the newly-created team, in a span of just five weeks, we recovered 13 loaded firearms from individuals on Rodeo Drive. This is unprecedented in the history of Beverly Hills.”

“The majority of those arrested were not residents of California, despite possessing and using California unemployment benefit cards,” Rivetti added. “I am proud that our department was one of the first to uncover the gross abuse of our state’s unemployment system. Through our efforts, many cities found similar fraud, and the state began to repair a very broken system.”

Crump said the task force arrested 106 people, only one of which was not Black. The department was unable to confirm that claim before deadline.

Gage said he has represented approximately 12 former city employees who have sued the police department for harassment and discrimination.

“We all deserve to be treated equally. Every life matters,” he said, recognizing the police department for not using force against White and Williams during the arrest. “We are here because we want to hold police accountable. Nobody is above the law. Everyone, especially the police, has to follow the law.”