All eyes on Melrose Avenue 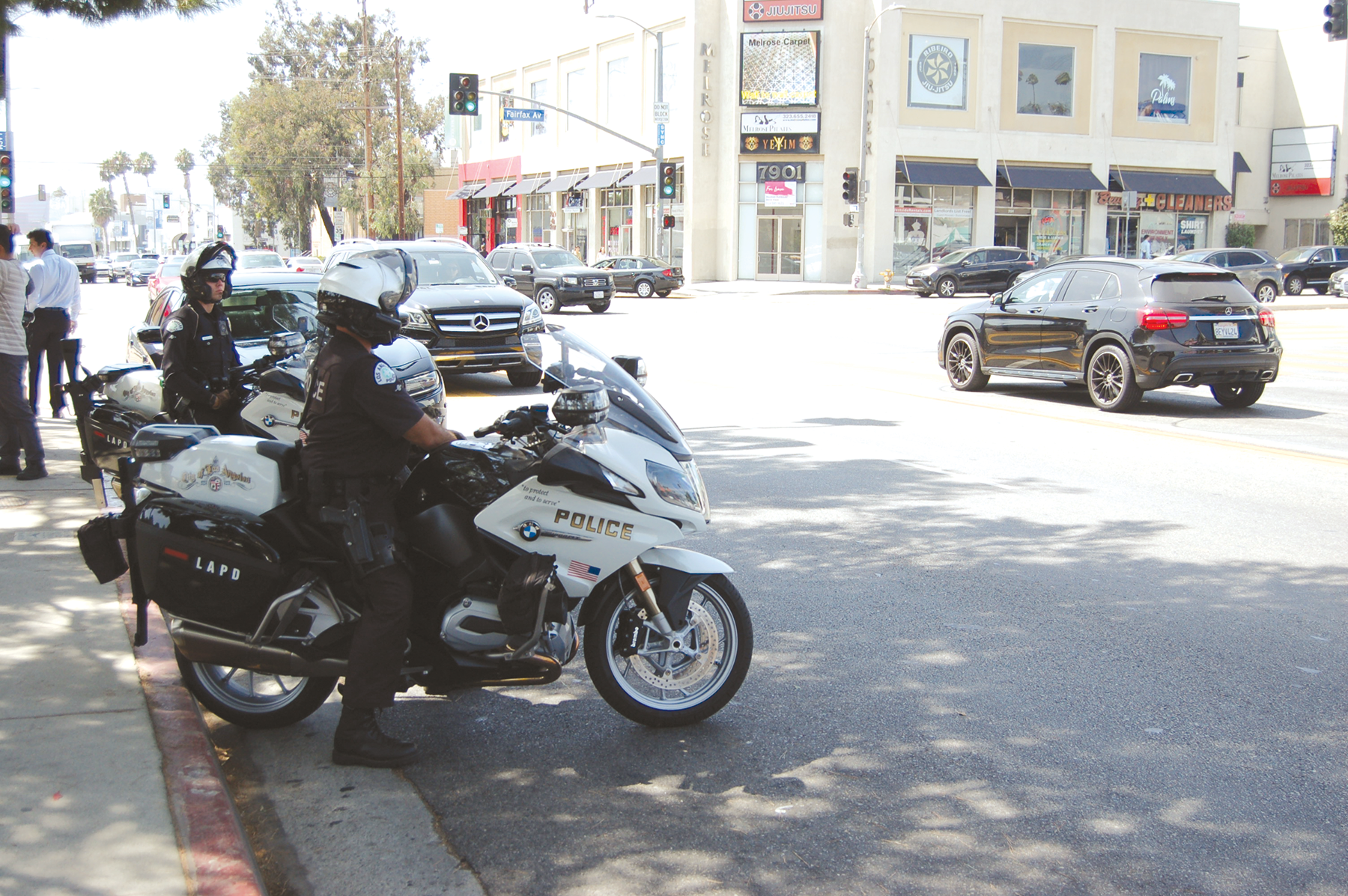 Motorcycle officers are just one resource being implemented to reduce traffic and prevent crime. (photo by Edwin Folven)

Senior Lead Officer D’Antraye Dantzler, with the Los Angeles Police Department’s Wilshire Division, said the department has devoted significant resources to the Melrose area in recent weeks, and the approach appears to be paying off. The LAPD has deployed motorcycle, car and bike patrols and used undercover operations to maintain a high visibility in the area.

“Our robberies are down [over the past week]. I am saying that with a little hesitation because I don’t want to jinx that situation, but we are making progress,” Dantzler said, adding that the two robberies that were reported over the previous week were unrelated and involved suspects robbing someone they knew as opposed to random victims. “Our standard robberies that we are used to getting in the area are down. Overall crime is down in the area. The biggest problem that we are experiencing now … we are starting to see that burglaries are on the rise. That’s division-wide, but it is something we have to watch out for. We are taking a close look at that because with the holiday season coming up, I know that theft usually skyrockets, but with our burglary numbers jumping, we want to get the word out to people.”

Dantzler said the burglaries are mostly occurring at residences where windows or doors are left open, and he cautioned residents to lock doors.

“That includes your back doors, sliding glass doors,” Dantzler said. “Make sure you lock up. That’s the biggest thing.”

Sgt. Danny Eun, of the LAPD’s West Traffic Division, said the department is also taking many steps to reduce traffic-related problems in the Melrose area. He oversees a unit with seven motorcycle officers that are frequently deployed to the Melrose District. Eun said those incidents include drivers failing to yield at stop signs and running red lights. He said residents should contact the West Traffic Division at (213)473-0222 to report problematic locations, and administrators will plan deployments to address specific concerns.

Eun added that street takeovers have become a significant problem citywide, including in the Melrose area with riders on off-road motorcycles and all-terrain vehicles. The department has deployed its Street Racing Task Force on weekends, when the takeovers primarily occur, and progress is being made, the sergeant added.

The riders typically scatter when officers arrive, so authorities use a police helicopter to monitor where they are headed and make arrests when there are enough officers to ensure the situation can be addressed safely. In June, the LAPD’s Street Racing Task Force followed a group of riders on off-road motorcycles from Hollywood to a location near Seventh Street and Mission Road near downtown, where patrol cars blocked the cyclists in a cul de sac. Six people were arrested for reckless driving, and numerous cars and motorcycles were impounded.

“When you get these street takeovers occurring with motorcycles, a lot of times people will see a motorcyclist go by, pop a wheelie, flip off a police officer and keep on driving. That officer may not spin around and immediately detain that one motorcyclist, but he will get on the air and start putting information out, because they have teams all over,” Dantzler said. “Our helicopter can then start to follow these motorcyclists from a safe distance so they don’t start riding erratically and hurt themselves or someone else. The officers can be guided in by the helicopter to where these people come to an end or lay their bikes down. That way, they can respond and swarm on them in a more safe manner.”

Dantzler said people who witness a street takeover should call 911.

“Please call in a tip, and officers will address it,” he added.

The town hall also included information from Officer Tamekia Watt, of the city’s parking enforcement department, who said more traffic officers are being deployed to the Melrose area. Watt said parking officers are focusing on illegally parked vehicles, including those blocking driveways, and she encouraged residents to call (213)485-4184 to report parking violations.

“Something like a blocked driveway is a priority call, so we do try to make it a priority to get to those in a timely manner,” Watt said. “If people feel like something is not being enforced, call our office and they will do increased enforcement in that area.”

Jill Kline, field deputy for City Councilman Paul Koretz, 5th District, said the council office can also help facilitate requests for improved infrastructure, such as new stop signs and speed bumps. She suggested residents call her at (323)866-1828, or email jill.kline@lacity.org, and she will work with the Los Angeles Department of Transportation and other city departments to expedite projects.

“Speed bumps were put on hold during the pandemic because they require a petition process and people knocking on doors,” Kline said, adding that a date has not yet been established but the city will soon restart the program. “For speed bumps, the application process opens twice a year, so start talking to your neighbors now.”

Are there any identifiable characteristics among the criminals committing these robberies or participating in the street takeovers? Or where they live? Or the types of stores they target?