A legacy of love through food 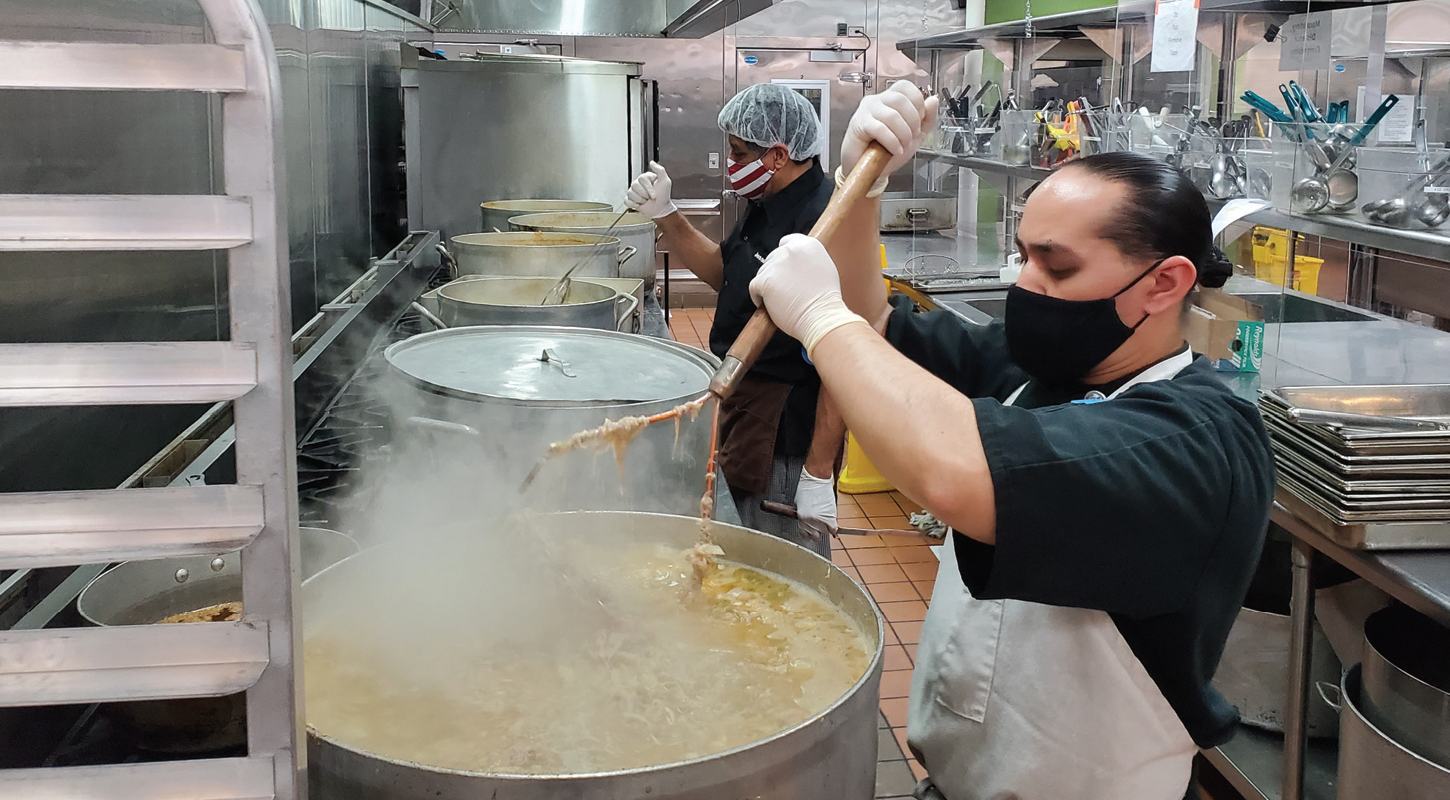 The expression of love through food is not a new concept. It can be seen in the homemade apple pie from grandma or the hand-crimped empanadas at Nonna’s. But a Los Angeles nonprofit takes the concept one step further.

“Food can be a great expression of love, but we’re firm believers in the fact that food is medicine,” Project Angel Food executive director Richard Ayoub said.

Project Angel Food, which now delivers 2,300 meals to those in need daily, was born from a desire to turn to solutions rather than despair in the height of the AIDS crisis. With a 33-year history, the organization has faced its challenges as it provided more than 14 million meals to those in need.

In 1989, Project Angel Food was founded by Marianne Williamson as an outreach program of what was then known as Los Angeles Center for the Living, which helped individuals who have life-threatening illnesses.

On the heels of the AIDS epidemic, Williamson set up a volunteer kitchen on the corner of Fountain and Fairfax avenues to cook meals for those with AIDS. Volunteers cooked comfort foods such as meatloaf and mashed potatoes. Williamson then organized other volunteers to deliver the meals to patients’ homes.

“Think about that for a minute,” Ayoub said. “Everyone was nervous because it wasn’t clear how you could contract AIDS, but there were a lot of fearless volunteers that said, ‘We and they are human beings and we need to take care of them.’”

The nonprofit held its first fundraiser, which brought in $11,000, and continued to serve meals to those in need, though the focus shifted to how the volunteers could help improve the lives of those living with HIV. Volunteers found that by giving patients a nutritious meal, their viral load could be lessened. 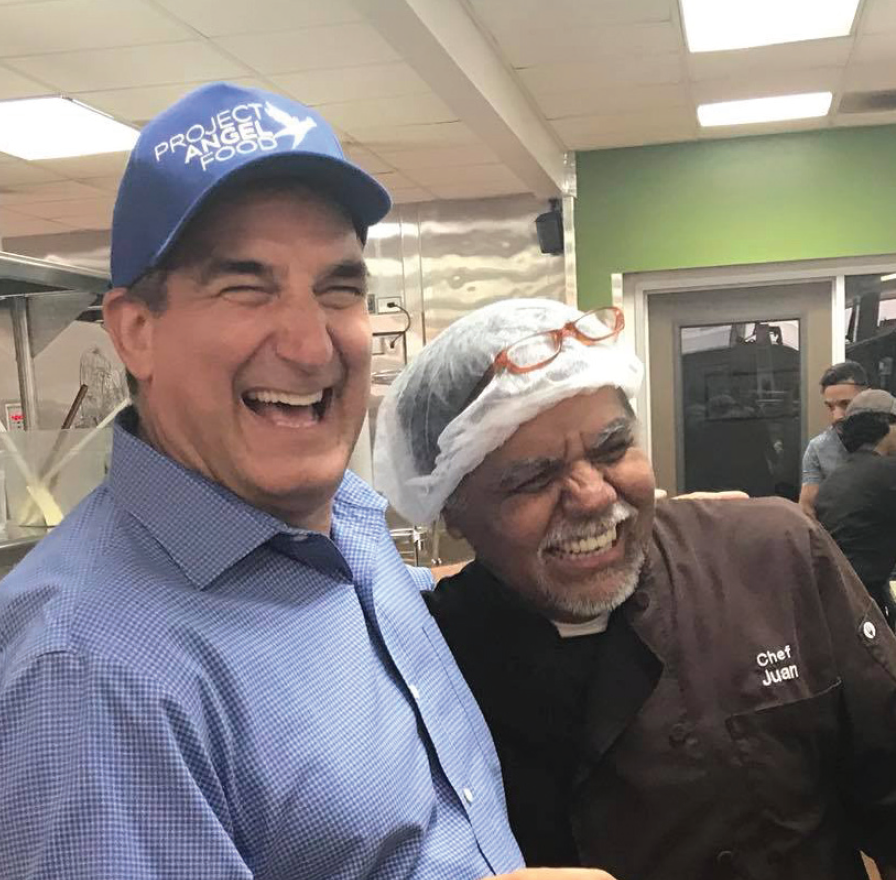 Today, the organization supplies about 95,000 meals a month. Patients receive anywhere from one to three meals a day depending on their illness. Each meal is medically-tailored to a patient’s illness, and registered dieticians regularly meet with clients to discuss their diet.

That type of service doesn’t come without its financial challenges, but Ayoub said the nonprofit has always been rich in support, even from some of Los Angeles’ famous figures.

In 1993, when the organization saw a growing number of referred AIDS patients, Ayoub said there was a moment when staff thought it wouldn’t be able to make payroll. One day, an envelope appeared on the doorstep that said, “Dear Project Angel Food, keep doing what you’re doing. Love, George.”

“It was from George Michael,” Ayoub said. “And it kept coming each year until he died and his family reinstated it after his death. He was always there for us.”

But the “Careless Whisper” singer isn’t the only famous name on nonprofit’s roster. Most recently, the Duke and Duchess of Sussex began volunteering.

“When you get celebrities like Harry and Meghan to deliver meals, you suddenly get this halo effect around your organization,” Ayoub said. “We are very grateful for the support throughout the years.”

Like most organizations throughout Los Angeles, Project Angel Food was greatly impacted by COVID-19. In 2020, the organization went from serving 1,500 people a day to 2,300 to help those who were at a greater risk should they contract COVID-19. At the same time, it wasn’t able to accept the help of its 4,700 regular volunteers.

But staff knew they had to persevere.

For Brad Bessey, head of communications and talent relations, days spent connecting with clients are special, made even more important by the isolation many felt during the pandemic.

“Sometimes when we show up to deliver food, I know I’m the only conversation that person might have had in the week,” Bessey said. “Part of being critically ill comes a feeling of isolation and we want to change that.”

In 2020, Project Angel Food increased its scope from providing roughly 650,000 meals a year to more than 1 million, something Ayoub said he was proud to do.

“It’s just an incredible feeling,” Ayoub said. “How often do you get to work at a place where just by showing up, you’re making the lives of 2,300 people better?”

Now, Project Angel Food is involved with two studies seeking to prove food can be used as medicine. The first, in partnership with Medi-Cal, is measuring how healthy meals effect the wellbeing of those with congestive heart failure. The second, in partnership with University of Southern California’s Keck School of Medicine, measures the effect of nutritional food on Native Americans with diabetes.

“We want to participate in these studies to prove to health plans and governmental agencies that not only is food medicine, but a nutritional diet is something they should invest in so we can feed more people,” Ayoub said.

Without the continued support of both volunteers and donors, Ayoub said the organization would not run. About 20% of Project Angel Food’s funding comes from the government while another 80% comes from private donations. There are 80 payroll employees at Angel Food and the rest of the work is performed by volunteers.

“People often say, ‘Project Angel Food will always be there and they’ll always be OK,’” Ayoub said. “But we have to keep reminding people that it’s because of them we’re OK. But what’s amazing is that L.A. never lets us down. Whenever we have a need, people come through for us.”

Courtney Echerd contributed to this story.

LACMA: Open for the public